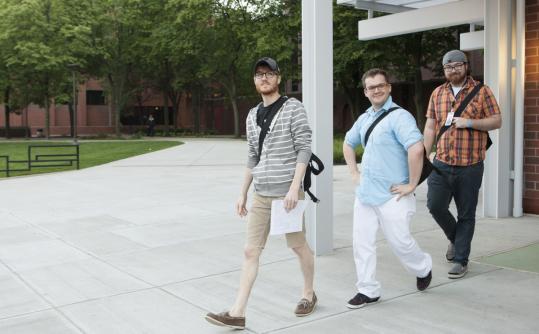 In addition to 307 workers in Rhode Island, 38 Studios had 106 employees in Maryland. Above, the Providence office Thursday. (Victoria Arocho for The Boston Globe)
By Todd Wallack, Mark Arsenault and Hiawatha Bray Globe Staff / May 25, 2012
Text size – +

Curt Schilling’s troubled 38 Studios laid off its entire staff in Rhode Island and Maryland on Thursday in a stunning turn of events for the former Red Sox pitcher’s ambitious gambit to build a video game franchise off the back of a winning baseball career.

The decision comes less than two weeks after 38 Studios’ financial woes surfaced and deep cracks began appearing in the six-year-old company. It was lured from Maynard to Rhode Island on the promise of a $75 million loan guarantee from a state hoping Schilling’s vision could bring high-paying jobs.

“I’m stunned, and I’m heartbroken,’’ said R.A. Salvatore, a Leominster fantasy author who was a consultant to 38 Studios and whose son worked at the company. “This is one of the best teams I’ve ever seen assembled. They were doing amazing work.’’

The company, which employed more than 400 full-time workers and contractors, moved to Providence in April 2011 and by February of this year had released its first game, Kingdoms of Amalur: Reckoning.

But 38 Studios missed its May 1 payment of $1.1 million to Rhode Island and did not have enough cash to meet its payroll on May 15. To stay afloat, it asked Rhode Island for more money, applying for $8.4 million in film-tax credits, which it could then sell to other companies seeking to lower their tax bills.

The company did not inform Rhode Island Governor Lincoln Chafee about the layoff. Chafee said the state has not been able to confirm how many workers were let go and has struggled to get other critical details since 38 Studios ran into financial trouble.

Still, Chafee said he is open to working with the company to help find ways for it to survive.

“I have not given up,’’ he said. “But I am also a realist. What we’ve learned from [industry] experts is grim news. Very, very grim.’’

Chafee said he believes 38 Studios executives have tried hard to find additional investors, such as venture capitalists, but have not had any luck so far. Schilling has publicly said he already put $30 million into the company, and he told state officials he did not have any more money to invest, despite a lucrative baseball career during which he earned $114 million.

Rhode Island has already provided the company with about $49 million of the $75 million loan. Chafee said he continues to oppose giving the company tax credits because of concerns it is likely to fail anyway and cost taxpayers even more. He added that the value of the intellectual property and other assets probably would be minimal, reducing the amount of money the state could later recoup.

The original loan package was approved under Chafee’s predecessor, Republican Governor Donald Carcieri; as a gubernatorial candidate, Chafee had criticized the deal with Schilling. The fallout from the loan has already led to the resignation of two officials from the Rhode Island economic development agency.

“If we could get some confidence that any further investment was going to lead somewhere profitable, I would be in favor of that,’’ said Chafee, a former Republican member of the US Senate, now a political independent. “That has just not been the case.’’

Pressed at a news conference Thursday about how the company could have failed so quickly, and whether the state had not provided the proper oversight for its investment, Chafee said the company had anticipated better sales from its first game.

“The game failed,’’ he said. “That was integral to the success of the company.’’

Kingdoms of Amalur sold an estimated 1.2 million units, which Chafee said is less than halfway to the break-even point, according to experts the state has consulted.

Schilling became a legend with Red Sox Nation in 2004 after pitching through an injury complete with a bloody sock during the American League Championship against the New York Yankees. He traded on his star power to build his company, which he renamed 38 Studios LLC, a reference to his Sox jersey number. Schilling retired from baseball in 2009.

The right-handed pitcher has said little to reporters, but has repeatedly taken to Facebook and Twitter to try to rally employees and raise hopes for the company’s future. On Thursday, he tried to rebut Chafee’s repeated claims that the company’s first game was a flop. In a Facebook post, Schilling insisted the game “outperformed’’ the expectations of its publisher, Electronic Arts.

Michael Pachter, a game industry analyst at Wedbush Securities in Los Angeles, said he was stunned by the failure of 38 Studios. He said Kingdoms of Amalur sold well and should have provided enough revenue to help the company stay afloat until its major project, Copernicus, was ready for release.

Pachter said the company must have lost control of expenses. “Clearly they spent more than they took in,’’ he said. “That’s just poor planning. What were they thinking?’’

But there was no guarantee that Copernicus, an elaborate online role-playing game set to be released in 2013, would be a big hit. Such “massively multiplayer online’’ games are notoriously costly and difficult to develop. Schilling estimated he might need more than $100 million to complete the game.

In addition to 307 workers in Rhode Island, 38 Studios had 106 employees in Maryland, where it bought the video game company Big Huge Games in 2009.

“It’s an incredible tragedy,’’ said Brett Close, a former 38 Studios chief executive who now works for Frog Design in Austin, Texas. The company’s trouble is a “testament to how difficult it is to create that type of product they were trying to build.’’

Video game experts say that 38 Studios could try to find a buyer or investor to salvage the company and remain in operation, but that scenario is unlikely.

“The consensus seems to be that it’s dead,’’ said Hank Howie, chief executive of Beach Cooler Games, a mobile game start-up in Boston.

Howie said part of the problem is that the company spent far too long working on Copernicus, in part because 38 Studios may have lacked enough experienced managers. He said the game should have taken the company no longer than three to four years, since it didn’t have unlimited funding.

“There are clearly some major issues,’’ Howie said. “You have to ship.’’