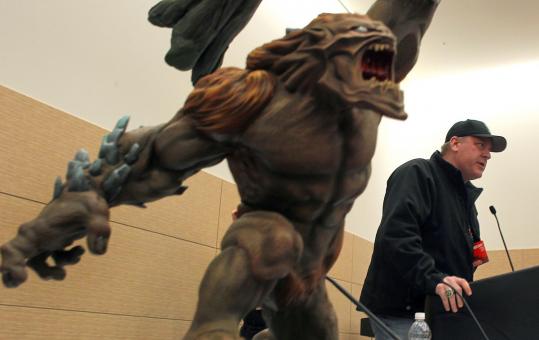 “This is a risk worth taking,’’ said Carcieri, a Republican, announcing the 2010 deal that lured Schilling’s company, 38 Studios, to Providence, and put Rhode Island taxpayers on the hook for up to $75 million in guaranteed loans to an athlete who liked video games but had never developed one.

“I think the governor had stars in his eyes, the whole idea of playing ball with a baseball player intrigued him and others,’’ said Republican state Representative Robert Watson, former Rhode Island House minority leader. “And I think they got blinded by that celebrity.’’

What Carcieri and supporters saw as the seed of a glittering new business sector for Providence, which has struggled for decades to replace jobs lost with the decline of its jewelry industry, now seems to be crashing down.

After missing a $1.1 million payment May 1 and a personal plea from Schilling for more public assistance this week, 38 Studios has said it does not not have enough money to pay its employees. On Wednesday, the state economic development official who oversaw the loan guarantees resigned abruptly. In a bizarre twist, at one point Thursday, company representatives hand-delivered a check to the Rhode Island Economic Development Corporation, apparently to cover the late $1.1 million payment, but then later said the company had insufficient funds to cover it.

The precise cause of 38 Studios’ current trouble is unclear; its latest negotiations with the economic development agency are confidential. But what is clear is that Schilling steered the company through a feverish hiring spree and into a high pay-off - but high-risk - realm of the gaming industry that requires enormous start-up money.

“It’s a vibrant market, but it’s a fairly risky market,’’ said Barry Gilbert, vice president of Strategy Analytics, a Newton consulting firm that advised the Rhode Island agency during its negotiations with 38 Studios. “To be successful in the space requires superb timing, superb management, superb talent, and a good dose of luck.’’

The economic development agency’s board is scheduled to meet on Monday to discuss any action the state could take to protect its investment.

In the beginning, Schilling’s company was aimed at Massachusetts, and his star power fueled it. He founded it on Aug. 28, 2006, as Green Monster Games LLC, a reference to the landmark left-field wall in Fenway Park, where Schilling became a legend after the 2004 American League Championship Series against the New York Yankees. He later changed the name to 38 Studios LLC, a reference to his Red Sox jersey number. The company’s original office was in Maynard.

Schilling was not chief executive of the company. His title was founder, chairman, and executive visionary.

He had massive ambitions. The company promised each of its original 37 employees a bonus of $1 million if 38 Studios reached $1 billion in value, a huge stretch for a start-up. By comparison, Warner Bros. agreed to pay as much as $160 million for Turbine Inc., one of the Boston area’s largest established video game companies.

Schilling has long been interested in gaming. As a baseball player, he collaborated on “massively multiplayer online’’ games - called MMOs - with Sony Online Entertainment. His office in Maynard was filled with decorative swords, a sign of the fantasy world his new company planned to create. From its infancy, 38 Studios imagined it would elbow into a multibillion-dollar market filled with games such as Blizzard Entertainment’s World of Warcraft, which boasts millions of fans.

MMOs are hugely elaborate and expensive, with the potential to become either blockbusters or giant busts, analysts say.

Because the games are so expensive to produce, strong funding is critical. “It does take hugely deep pockets,’’ said Gilbert, the consultant. Schilling claimed he personally invested as much as $30 million in the venture. Schilling also personally guaranteed a $2.5 million line of credit that 38 Studios took out in 2010, which the company repaid with a portion of the proceeds it received from Rhode Island.

Schilling had originally hoped to launch the game’s first product in 2010. But he immediately hit trouble raising money. He shocked venture capitalists with an audacious pitch for $48 million - far more than gaming companies typically receive in an initial round of funding. In addition, Schilling was reportedly reluctant to give up much stock in exchange for funding. Flybridge Capital Partners and several other Boston area firms passed on 38 Studios.

“More than one VC who has met Schilling has come away with the impression that an investment would require quite a bit of ‘babysitting,’ ’’ noted a trade publication, Private Equity Week, at the time.

Schilling estimated he might need more than $100 million to complete the multiplayer game, code-named Copernicus.

In April, Democratic leadership in the Rhode Island House brought forth a supplemental budget that included $125 million in loan guarantees for job creation, Watson said.

“I had heard rumors that both the governor and House leadership were desperate to cut a deal with Schilling,’’ Watson said. “Nobody was admitting to anything at the time. Frankly, Keith Stokes [director of the Rhode Island Economic Development Corp.] and Governor Carcieri’s office were full of obfuscation, camouflage, and possibly outright lies.’’ Watson said he opposed the program as “a scandal waiting to happen.’’

When the proposal came back for more debate in May, Representative Laurence Ehrhardt, a North Kingstown Republican, was ready with an amendment that would cap at $10 million the loan guarantee available to any one company. Loan guarantees would mean the state would be obligated to pay if the company defaults.

As debate began on the House floor, Ehrhardt got a note that someone wanted to see him in the hall, he said. It was Stokes, the economic development director.

“He had learned of my amendment and made a personal request that I not submit it,’’ said Ehrhardt. Stokes never mentioned Schilling, suggesting only to Ehrhardt that the cap would “cause some difficulties with some negotiations they were having. But nothing more specific then that.’’

Schilling’s company released its first effort earlier this year, a role-playing video game called Kingdoms of Amalur: Reckoning. It was well-reviewed and has sold about 1 million copies at about $60 each, according to market research company VGChartz.

Governor Lincoln Chafee, an independent, criticized the deal with 38 Studios as a candidate in 2010. He has been cool to Schilling’s request for more public assistance, though Chafee has said it is in the state’s interest to find a way to save the company.

Other opponents blasted the deal on Thursday, and warned against any more taxpayer dollars for Schilling’s company.

“We got hoodwinked; we got played,’’ Watson said. “How many millions of dollars does Curt Schilling have? He can’t write a check? It’s Rhode Island that is supposed to provide the money? I think not.’’

Stokes, who resigned late Wednesday, had little to say about the unraveling deal with Schilling, insisting the economic development agency’s negotiations with the company remain confidential. He would not directly address whether the agency gave proper oversight to the state’s investment in 38 Studios.

“I really can’t comment on the nature of the transaction,’’ he said. “I can give you my favorite William Faulkner quote, which is: ‘All of us failed to match our dreams of perfection.’’’