Trying to gauge the impact of growing up digital 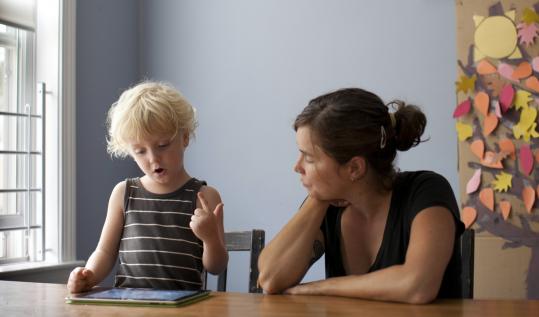 Bridget Colvin lets August use an iPad an hour per day but hopes he will come to appreciate traditional books, too. (Photos by Dina Rudick/Globe Staff)
By Michael B. Farrell Globe Staff / October 18, 2011

A few clicks, a couple of swipes, and Bridget Colvin’s 4 1/2-year-old son, August, was tapping away on an iPad smudged with tiny fingerprints.

Colvin’s younger son, 1 1/2-year-old Calum, climbed onto the table in their Roxbury kitchen, hoping to join the animated action of Early Bird, essentially Angry Birds for the pre-K set.

His mother was not pleased. She wants to limit his exposure to electronics, for fear Calum will grow up thinking all books are interactive. She has already seen him try to swipe the paper pages of real books.

“I want him to appreciate books for the way they are,’’ she said.

But for many children, plain old books aren’t enough. Companies are rolling out an ever-growing line of products, from apps for learning ABCs to toddler-size tablets, that are giving rise to a generation of digital natives. The trend is just emerging, and many specialists can’t say how much technology is the right amount and whether it will hamper child development. But there is little doubt we are seeing only early stages of a hyperconnected world that is changing childhood.

“We are conducting the world’s greatest experiment in real time on our children,’’ said Liz Perle, editor in chief at Common Sense Media, a San Francisco nonprofit group that helps parents manage media and technology.

The combination of a smartphone’s intuitive interface and thousands of apps for iPhones and Androids aimed at young children has fast made it a child’s favorite plaything. And as the smartphone market continues to explode, more parents are passing their phones to their offspring as tools to educate or gadgets to pacify.

Two-thirds of 4- to 7-year-olds have used an iPhone or iPod, according to a 2010 survey from the Joan Ganz Cooney Center at Sesame Workshop.

An upcoming study by the center illustrates how quickly children are picking up the technology: 72 percent of the 100 top-selling education apps in Apple’s iTunes App store this year were aimed at preschoolers and those in elementary school. That number is sharply higher than what the center found in 2009, before the debut of the iPad.

The latest study was partially funded by the Bill and Melinda Gates Foundation.

Not only are parents sharing phones with young children, many are buying them their own devices. Six percent of 2- to 5-year-olds have their own smartphone, according to a report this month from Play Science, a research firm in New York.

Matt Kealey has not bought his 3-year-old daughter, Meghan, a smartphone, but she knows how to snap photos, shoot video, and play music on her mother’s iPhone 4. Meghan can even surf videos on YouTube, “which we weren’t very happy with because you can find some weird stuff,’’ said Kealey, a civil engineer who lives in Framingham.

“We kept trying to hide YouTube, and any place we could stash it she would always find it,’’ he said.

They aren’t giving their daughter free rein with the phone, he said. “We usually like to sit with her when she’s doing stuff on the phone,’’ Kealey said. “We don’t let her do it all the time. It’s a treat.’’

For parents who want to know what makes a healthy digital diet for youngsters, answers are hard to come by as researchers and educators struggle to keep up with the rapid rise in technology.

“There really just is not enough deep research on what the implications are, and children are spending a lot of time in front of these devices at critical ages,’’ said Cynthia Breazeal, an associate professor of media arts and sciences at the MIT Media Lab.

And all signs indicate that we are seeing just the beginning of a digital onslaught in products aimed at young children.

LeapFrog, the company behind the popular Leapster hand-held computer game, released LeapPad in June. The 2GB tablet with built-in camera and video recorder is aimed at 4- to 9-year-olds and has a suggested price of $99. A Canadian company, Rullingnet Corp., unveiled its tablet for babies, called Vinci, in August. It sells for as much as $479.

This month, Fisher-Price’s $15 Laugh & Learn Apptivity Case, an oversize iPhone case that doubles as a baby rattle, hit toy store shelves. Fisher-Price has already sold out of the units on Amazon, where it went on sale first. The three apps it designed for the case - including Where’s Puppy’s Nose? - have been downloaded more than 700,000 times.

“The Gen Y mom is so comfortable with passing back a digital device to even the youngest child,’’ said Dave Ciganko, vice president of product design for Fisher-Price. But, he said, “we also know there is a little bit of angst over dropping the product.’’

The company’s toy appears to be one of the first on the market meant to put an iPhone or iPod Touch into a baby’s hands - along with plenty of coverage against drools and tantrums.

Ciganko and his colleagues for years have observed “moms in that critical moment pulling out that iPod to give their kids, and then there was quiet.’’

Educators are also adopting digital devices for the classroom. Teachers in kindergartens and preschools across the country are increasingly using e-books, not just cracking open traditional books.

Susan Leger-Ferraro, president of Little Sprouts, bought iPads for her string of day-care centers in Massachusetts. “We wanted the children to be exposed to that kind of technology and the apps that go along with them,’’ she said.

The children in the centers’ preschool classes use them to draw letters, read, and take pictures to e-mail to their parents. “They can use them better than the adults. They just gravitate toward them,’’ Leger-Ferraro said.

The amount of time children spend in front of screens has been a matter of debate since experts began fretting over children’s TV habits.

The American Academy of Pediatrics has long cautioned parents against putting children under 2 in front of screens and that older children should be limited to one to two hours of daily screen time of quality programming.

But those warnings were originally based around television, still the dominant way children are exposed to media.

The group plans to release new guidelines today, during its annual conference in Boston, about media use by children age 2. The update will reflect 10 years of additional research and take into account the growth of the digital world since the original policy was adopted in 1999.

Dr. Michael Rich, director of the Center on Media and Child Health at Children’s Hospital Boston, said young children are drawn to smartphones and tablets for the same reason they are to TV: The products continually grab their attention.

They reflexively respond to new things in their environment, Rich said, and researchers are looking at how that constant triggering of the reflex, called an orienting response, could affect a child’s depth of attention over the long term.

Stacking blocks on a screen isn’t the same as playing with real ones, he said.

“I don’t think we should see these technologies as toxic,’’ he said. “It is what we do with them, and how that fits [into] the larger experience of our lives, that makes a difference.’’

Parents should consider moving beyond apps when letting children use digital devices, said Michael Robb, director of education and research at the Fred Rogers Center for Early Learning and Children’s Media.

“There are a lot of opportunities to explore and do more open-ended activities,’’ he said. “You could use photography and create a slideshow with sound. It really makes sense about thinking about how to introduce kids to smart uses of technology so they can be digital-media literate.’’

Colvin, the Roxbury mother, said she began introducing computer skills to her son when he was 3. August clicked and dragged and learned to use the arrow keys. She comes from a tech-savvy family of early adopters and wanted her son to get a head start on his digital journey.

She said she spends a lot of time reviewing the apps August plays during his hour of daily “screen time.’’ In a few clicks, he moved from Early Bird to Happy Hills to Monster Pet Shop - all games.

“He’s learning a lot of valuable stuff,’’ she said, “but it’s not purely educational.’’