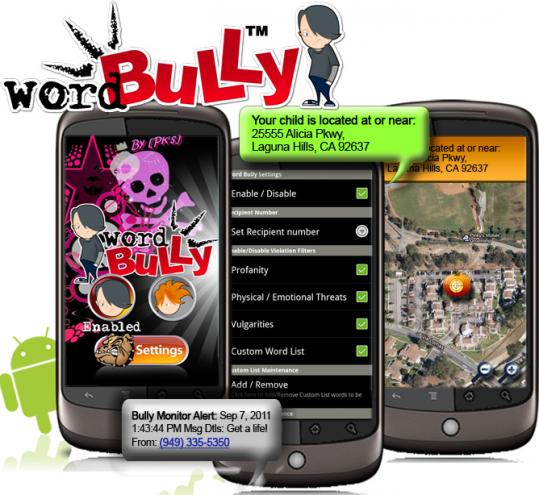 Each year, by the time folks are planting those plastic tombstones on their front lawns, some developers are playing on our worst fears.

An e-mail I received from a flack last week raised the specter of kidnappers combing the streets for trick-or-treaters. Despite the spooky pitch - “Whether it is the pageantry of Halloween night or the innate desire we have to believe that our world is a good place, the reality is that every 40 seconds someone’s son or daughter is reported missing . . .’’ - the new app, Securafone, will not sound an alarm when a masked madman draws near. But it will alert you when your child strays beyond the geographic zone you have set.

Then there is the everyday threat our children face from cyber-bullies. Another new app, Word Bully, keeps the haters out of your child’s mobile phone (and, hopefully, his head), by blocking incoming text messages. The app does its filtering with a list of roughly 3,600 mean words, phrases, and “bully-cons,’’ plus any others you add to the list.

Word Bully will send to your phone a copy of any offending message, along with the time it was received, and the bully’s phone number.

Iconosys Inc., which makes Word Bully, markets another app that sets boundaries like Securafone. And this one actually bears a Halloween theme. Called Trick or Tracker, it alerts parents when their children go a block too far to fill their baskets.

Both Securafone and Trick or Tracker have panic button features, so children can instantly reach out for help if they become lost or fear they are in danger.

Trick or Tracker, which has been out for a year on Android devices) costs about $5 for each phone, parent, or child. From the child’s application, a youngster can see where he is on a map, and send that information to the parent’s phone to which he is paired.

Securafone (currently for the iPhone and Android devices) is free, but requires an approximate $9 per month subscription. It also does a more than Trick or Tracker can on its own. Securafone, for example, can track a phone’s GPS transponder to alert you when your teenager is driving too fast, and block incoming calls and text messages while he is on the road.

Word Bully is free before Oct. 15. After that, the app, which includes Trick or Tracker, will cost you about $10.

There is an Android version of Word Bully available now. An iPhone version is due before Christmas.

Tokyoflash taps the edge of timepieces

Tokyoflash Japan has released another sleek wristwatch for cool cats and collectors.

The Kisai Rogue Touch is the design outfit’s first touch screen watch, with a hybrid LCD/LED face. It has no buttons on its polished gunmetal case. Rather, you tap on the screen to turn on its LED backlighting at night.

The watch, which costs about $180, displays two time zones simultaneously, and the time in complex bands of bars and blocks.

You also touch parts of the screen to set the time and alarms.

Tokyoflash’s weird, hard-to-figure-out watches are all limited editions. Once sold out, you can visit them at the company’s online Watch Museum.