A real test for techies: the education market 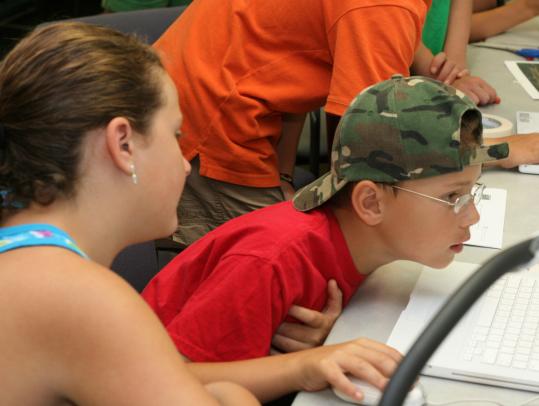 Adele Julien (left) and Andrei Cerci used iCreate to Educate’s software to make an animation illustrating a scientific concept at a workshop run by the Boston company. (Icreate To Educate)
By Scott Kirsner Globe Correspondent / September 18, 2011

Some entrepreneurs try to introduce new technologies into the cubicles of the Fortune 500, the battlefield, or the operating room. But the truly intrepid develop products for the classroom.

Teachers don’t have time to evaluate new software. Principals control the purse strings, and superintendents want to see proof of educational merits, usually in the form of improved test scores. “It’s incredibly challenging, even when you’re trying to sell to schools that have money to spend,’’ says Melissa Pickering, founder of Boston-based iCreate to Educate, which makes animation software.

Still, there’s a growing cohort of software companies in Boston trying to organize educational videos, prevent college students from dropping out, render textbooks obsolete, and teach math skills in a way that sticks. Several have raised substantial funding. A monthly Ed Tech gathering was launched in March, and a major Educators and Entrepreneurs Summit is being planned for December.

Pickering’s company offers free and paid versions of software that allows students to make stop-motion animations (think “Mr. Bill’’) to illustrate scientific concepts. “If you’re making an animation that shows the process of photosynthesis or the life cycle of a butterfly, you truly have a better understanding of it,’’ says Pickering.

The free version of the software, which requires a computer with a webcam, has been downloaded 40,000 times, she says. An individual teacher typically discovers the software, uses it in a class, “and then they’ll be the sales champion to a principal or administrator,’’ Pickering says. The paid version starts at $35, for use on one computer.

Alex Grodd, a onetime English teacher at Roxbury Preparatory Charter School, started BetterLesson to help teachers find lesson plans developed by other teachers. As with most social networks, there’s a way to rate and comment on each lesson. A basic version of the site is accessible free of charge, but school districts can also pay for a customized version, which includes tools for analyzing how teachers use the service. The Cambridge company raised just over $1 million earlier this year.

Persistence Plus was also created by a former teacher, Kenny Salim, who once taught biology at Brighton High School. The company aims to be “the Weight Watchers of college completion,’’ says Salim, motivating students via their mobile devices.

“There’s all kinds of research that shows that if you’re part of a network of people who are trying to exercise more regularly, you’ll go to the gym more,’’ Salim says. “It’s about positive peer pressure and social accountability. Well, we want to deliver those kinds of nudges using a mobile platform, to encourage people to participate in study groups or take advantage of office hours or manage their study time better.’’ The company, founded earlier this year, has just begun to test prototypes with students.

TenMarks, based in Newton, targets parents and students with a math tutoring website. Students work on concepts like figuring the area of a trapezoid - accessing hints and instructional videos - until they grasp it. Then, they advance to more challenging problems.

Kids can choose a reward, like a video game, for working with the site for a certain number of weeks. (Parents pay $10 a month for access to the site; per student pricing for schools is lower.) The 30-person company recently closed a $3 million round of funding from Catamount Ventures, a San Francisco firm.

The Boundless material is searchable, students can make notes or highlight sections online, and share that with classmates. (The founders wouldn’t discuss their business model with me, but their site promises that Boundless will always be free for students.)

And the roll call goes on. Firehoze is creating videos to explain concepts like DNA mutations. Electrokite aims to supply content for electronic whiteboards as iTunes does for iPhones and iPads. Memrise teaches English and foreign language vocabulary using cartoons and funny videos.

Education technology entrepreneurs, unsurprisingly, are optimistic that their technologies will support more efficient modes of teaching and learning. Most wish that schools would be more receptive to new approaches. As Stephan Thieringer, chief executive of AcrossWorld Education, notes: “It’s high time that we do something. This country invests $91,000 a year per student - more than just about anyone else in the world - but we’re ranked 14th in reading and 25th in math.’’

But Michael Goldstein, founder of the MATCH charter high school and middle school in Boston, observes that “there’s a history several decades long of technology promising to make education better, and teachers finding it remarkably difficult to implement.’’

Skepticism is baked into this market.