In Cambridge, Microsoft and IBM are at work developing software so companies can run secure in-house social networks

Microsoft and IBM, two of the world’s most established technology companies, have developers in Massachusetts building the companies’ own versions of one of the Internet’s newest giants: Facebook.

Both are creating social networks that companies could own and use within their offices, rather than have employees chatting with each other on the uncontrolled online landscape that Facebook has become.

The companies both have teams in Kendall Square in Cambridge - so close to each other that they are probably checking in at the same pizza spots on Foursquare.com.

And both sometimes refer to their projects as “creating a Facebook for business,’’ but they are more complicated than that. The companies are incorporating the features people expect on their favorite social networking sites - from the ability to post comments to “liking’’ projects to sharing documents and photos - in the complex suites of office software they sell to businesses.

“Social networking is a key strategic angle for both IBM and Microsoft,’’ said Rob Koplowitz, an analyst with Forrester Research in Cambridge. “Both companies want to social-network your world.’’

Koplowitz said the two companies are also “under a lot of pressure to keep up with the consumer market, where social networking is very hot.’’

The two venerable companies must also keep a wary eye on aggressive small competitors such as Jive Software Inc. and Yammer Inc., which also offer businesses products to create social networks for employees.

“The time clock in social networking runs very fast,“ Koplowitz said. “If Twitter or Jive adds a cool feature and it takes you years to catch up, you’ll be left behind.’’

SharePoint, introduced in 2001, was originally designed to enable companies to set up websites to share information inside and outside of the firm, and to manage documents and publish reports. But Microsoft has been rapidly adding social software features to SharePoint, including with a major upgrade in 2010. The software now promises to enable blogging, personal profile pages, tagging, wikis, and Twitter-like activity streams.

IBM’s social networking ambitions are pinned on IBM Connections, a software package it first issued in 2007 that allows users to create home pages, profile pages, blogs, and wikis - online encyclopedias that can be continually updated by users. Last month, IBM launched companion applications, or apps, for the program that allows users to access the software’s features from their Apple Inc. iPhones and iPad tablet computers, and mobile devices that run Google Inc.’s Android operating software.

Calvin Koo, associate director of business process at the Cambridge headquarters of the Novartis Institutes for BioMedical Research, has seen the influence of consumer social networks up close, as employees ask for their office systems to offer the features they use in their private lives.

“Now people are always coming up to me and asking, ‘Can we get something like this?’ ’’ said Koo, a Microsoft SharePoint customer who helps 6,000 scientists connect with each other.

Often what employees are requesting is a feature they, or their children, have been using on their personal time.

Although IBM’s product is only four years old, its developers say they have been able to tap into experience that goes back much further.

“We have 426,000 employees in 110 countries, so we’ve been using these kinds of networking tools for a while,’’ explained Jeff Schick, vice president of social software at IBM. “We’ve been able to learn a lot from watching how we use this kind of software internally.’’

The popularity of social networking has encouraged people to use features that Microsoft had trouble explaining to customers in the past.

“We’ve actually had social features in SharePoint since 2003,’’ said Jared Spataro, a member of Microsoft’s SharePoint development team. “But often people weren’t ready for them. For example, we were offering a Facebook-style profile page called My Site before Facebook was launched.’’

Many features that are now popular with consumer social networks have long been predicted by technologists as tools that companies would use.

“Think about concepts like ‘knowledge sharing’ and ‘knowledge management’ - those ideas have been talked about for companies since the 1990s,’’ Spataro said. “But there wasn’t the interest from employees in those kinds of ideas . . . until Facebook.’’

And Spataro says Facebook has taught Microsoft some valuable lessons.

One feature that both IBM and Microsoft have added to their social portfolio: security.

“Security is a major difference between social networking outside the company and inside,’’ said Christopher Crummey, a sales executive with the IBM’s software group. “Companies love the social features, but they also want to know: Is it secure? That’s an area where we have a lot of experience.’’

One competitor that Microsoft and IBM don’t have to worry about is the biggest player in social networking: Facebook itself.

The company declined to comment on its plans, but Koplowitz said it is extremely unlikely that the social networking giant would try to expand into the business market.

“Facebook has such a huge consumer opportunity that the enterprise business seems like it would be a distraction,’’ he said.

In any case, the value of the Facebook name may not carry much weight in the business world.

“If you make a big deal of introducing the software to people in a company as ‘Facebook for business,’ it can just sit there. Crickets,’’ said Spataro. “Many employees don’t want to think of their work colleagues the same way they think about their girlfriend.’’ 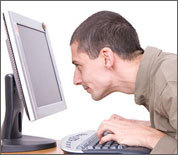