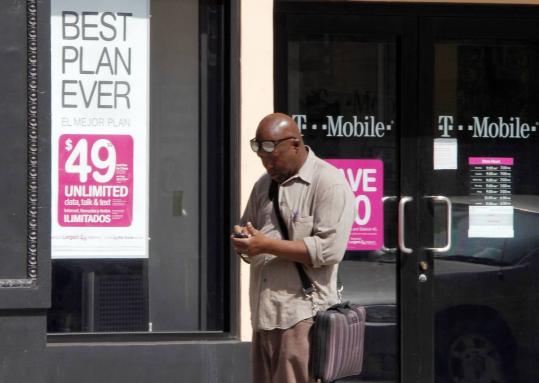 WASHINGTON - The Justice Department sued yesterday to block the proposed $39 billion merger between cellphone giants AT&T and T-Mobile USA, arguing that keeping them separate would preserve competition in the wireless industry and even help save jobs.

In a lawsuit filed in US District Court, the department argued that joining the second- and fourth-largest wireless phone carriers would result in higher prices and give consumers fewer innovative products. The companies disagreed, and labor unions that support the deal said the merger would add jobs, not cost them.

“The view that this administration has is that through innovation and through competition, we create jobs,’’ said James M. Cole, deputy attorney general. Mergers usually reduce jobs through the elimination of redundancies, he said, “so we see this as a move that will help protect jobs in the economy, not a move that is going in any way to reduce them.’’

The lawsuit sets up a high-profile antitrust battle - a rarity since the election of President Obama, who campaigned with promises to revitalize the Justice Department’s policing of mergers and their effects on competition, which he said declined significantly under the George W. Bush administration.

“We plan to ask for an expedited hearing so the enormous benefits of this merger can be fully reviewed,’’ Wayne Watts, general counsel at AT&T, said in a statement. The Justice Department “has the burden of proving alleged anticompetitive effects, and we intend to vigorously contest this matter in court.’’

Deutsche Telekom, T-Mobile USA’s German parent, said the Justice Department “failed to acknowledge the robust competition in the US wireless telecommunications industry and the tremendous efficiencies associated with the proposed transaction, which would lead to significant customer, shareholder, and public benefits.’’

AT&T has been actively involved in discussions with the Justice Department and the Federal Communications Commission since the proposal was announced in March. The company has indicated it would consider divestitures or other actions to allow the deal to go forward.

But Justice Department officials said those discussions led them to believe it would be difficult to arrange conditions under which the merger could proceed.

“Unless this merger is blocked, competition and innovation will be reduced, and consumers will suffer,’’ said Sharis A. Pozen, acting assistant attorney general in charge of the antitrust division.

Both the FCC and Justice Department would need to approve the merger, and although they consider a proposed combination on different scales, they usually reach the same conclusion. The FCC hinted that it was leaning in the direction of blocking the AT&T deal with T-Mobile.

“Competition is an essential component of the FCC’s statutory public interest analysis,’’ said Julius Genachowski, the FCC’s chairman. “Although our process is not complete, the record . . . raises serious concerns about the impact of the proposed transaction on competition.’’

“This announcement is something for consumers to celebrate,’’ said Parul P. Desai, the policy counsel for Consumers Union.

“We have consistently warned that eliminating T-Mobile as a low-cost option will raise prices, lower choices, and turn the cellular market into a duopoly controlled by AT&T and Verizon.’’