Steve Jobs’s career defined as much by missteps as triumphs

Jobs, who stunned the computer industry on Wednesday with his resignation as chief executive of computer giant Apple Inc., has failed time and again, occasionally in spectacular fashion. He’s introduced products that bombed. He sent his companies in directions that went nowhere. And once, he was kicked out of Apple itself, an event that led to one of the greatest second acts in American business. Fifteen years after he returned as chief executive, he’s lifted Apple from near-bankruptcy to a stock market value of $300 billion, second-highest of any US company.

Jobs’s career demonstrates how failure can be a constant companion, even for winners. Robert Kraft, owner of the , runs one of the most successful sports franchises in America, yet his team hasn’t won a Super Bowl since 2005. “It’s a challenge every week,’’ said Kraft, “and you go from the pinnacle to the pit, and very fast.’’

Kraft said that Jobs has the rare ability to keep losing but keep trying. “I think that Steve Jobs is unique in that he’s a visionary who also knows how to execute,’’ Kraft said. “He’s not afraid to fail.’’

Jobs and Apple cofounder Steve Wozniak launched the personal computer era with the Apple II in 1977. But Apple found it hard to stay on top. Its next major product, the Apple III, was plagued by faulty construction, and thousands were recalled. “When the III was going down, it looked like the end of Apple,’’ said Bob Metcalfe, co-inventor of Ethernet networking technology and a professor at the University of Texas at Austin.

Apple and Jobs survived that fiasco, but followed it up with another in 1983: the Lisa computer. Designed as a dream machine for advanced users, its $10,000 price frightened off customers, and few were ever sold.

The greatest of Jobs’s failures occurred in 1985. A year after the release of the iconic Macintosh computer, one of the company’s most influential products, he was ousted in a coup led by John Sculley, the man Jobs had recruited to be Apple’s chief executive.

“At 30, I was out. And very publicly out,’’ Jobs said in a 2005 commencement address at Stanford University. “What had been the focus of my entire adult life was gone, and it was devastating.’’

On the rebound, Jobs founded NeXT Inc., a company that built desktop computers with advanced technology. People who knew computer hardware were awed by the new machines. “I remember being very impressed with how well they were put together,’’ said Al Hilwa, a software analyst at IDC Corp. in Redmond, Wash., who once worked as a computer technician at a company that purchased hundreds of NeXT machines.

But NeXT machines were costly, and incompatible with other desktop computers. NeXT sold a grand total of 50,000 machines, and threatened to leave Jobs as a footnote in the history of digital technology.

Still, as was the pattern in Jobs’s career, success was born of the failure. The NeXT’s incompatible operating system software was a blessing in disguise, robust and highly reliable compared to Microsoft Corp.’s Windows software, or the software then used on Apple’s Mac computers.

Apple executives knew the Mac badly needed an upgrade. So in 1996, they struck a deal with their ex-boss Jobs to buy NeXT for $429 million. The NeXT computer didn’t survive, but its operating system became the basis for the Mac OS X software that runs Macintosh computers today.

Suddenly, Jobs was back at Apple. Within a year, he ousted the previous chief executive and regained total control, imposing his creative vision on every Apple product. The result was a long string of hits, and a fair number of misses. There was the overpriced, hard-to-upgrade Cube desktop computer. That was followed by the ROKR, an ill-fated partnership with Motorola Inc. to build a cellphone compatible with Apple’s iTunes music service. But those failures were overshadowed by the massive success of the iMac computer, the iPod music player, the iPhone, and the iPad.

From failure, Jobs had learned valuable lessons. “The old Steve would not have succeeded the way the new Steve did when he was back at Apple,’’ Metcalfe said. “He seemed to have learned about management.’’

Amy Edmondson, a professor at the Harvard Business School, said successful entrepreneurs learn to expect failure. “Anything new and different and exciting that you’re going to try to do has a very high likelihood of failing,’’ Edmonson said. “If you understand that, you’re much better off.’’

But to benefit from failure, business people must study their blunders and learn from them. “The great human tendency,’’ said Edmondson, “is to put it behind us and move on, rather than milk it for its lessons.’’

The key question for Apple, she said, is whether new chief executive Tim Cook will prove to be as good at losing as Steve Jobs was. 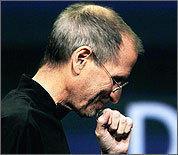