Jobs resigns as CEO of Apple

Steve Jobs, the technology genius who revolutionized personal computers and transformed the way hundreds of millions of people listen to music and use mobile phones, stepped down yesterday as chief executive of Apple Inc., the company he cofounded 35 years ago.

Jobs, 56, was the creative force behind the Mac computer, the iPod music device, the iPhone, and the iPad tablet computer. He has been battling a rare form of pancreatic cancer for at least seven years, and underwent a liver transplant in early 2009.

“I have always said if there ever came a day when I could no longer meet my duties and expectations as Apple’s CEO, I would be the first to let you know,’’ Jobs wrote in his resignation letter. “Unfortunately, that day has come.’’

His departure as CEO could dramatically alter the high-tech and consumer electronics industries and the fortunes of Apple, the second-largest publicly traded company, with a market value of nearly $350 billion.

The board of Apple, based in Cupertino, Calif., elected Jobs as its non-executive chairman and named its chief operating officer, Tim Cook, to succeed Jobs as chief executive.

Leaders in the Boston area’s high-tech community, who often cite their rivalry with California’s Silicon Valley, said Jobs’s legacy is unparalleled in the technology world.

“Steve Jobs is on my ‘eternal heroes’ list,’’ said Bob Metcalfe, who founded computer networking giant 3Com Corp. and is now a general partner at Polaris Venture Partners in Waltham. “He did what he set out to do: create insanely great products. And he did it his way.’’

“He’s the most brilliant software developer and tech business person who’s ever lived,’’ said serial high-tech entrepreneur and angel investor John Landry of Wayland. “He’s taken his vision and created the most valuable technology company in the world.’’

David Tames, who worked for Apple in the late 1980s and early 1990s as a senior systems engineer, said Apple products like the Mac computer have “basically defined what I do and how I do it.’’

Tames, who now works for the Massachusetts College of Art and Design, said that given Apple’s influence on the modern consumer, finding someone to fill Jobs’s shoes will be “much tougher than filling the presidency of the United States.’’

Apple issued a statement yesterday that outlined the transition but gave no reason for Jobs’s resignation.

In his resignation letter, released by the company, Jobs recommended Cook as his successor and said he believed Apple’s “brightest and most innovative days are ahead of it.’’

Jobs, who was born in San Francisco and grew up in Cupertino, cofounded Apple in 1976 with high school friend Steve Wozniak, after dropping out of Reed College in Portland, Ore. Their breakthrough product, the Macintosh, on which Jobs oversaw development, was introduced in 1984 and quickly helped bring computers - long the province of corporate data centers - to the desks of everyday consumers.

But Jobs left Apple in 1985, after being fired as chairman in a power struggle on the company’s board. He then started NeXT Inc., a company that developed a sophisticated computer workstation, and later cofounded Pixar Animation Studios, where he was chief executive.

Jobs returned to Apple as an adviser in 1996, as part of the company’s acquisition of NeXT. At that time, Apple’s market share had fallen in the computer industry, which was dominated by machines running Microsoft Corp.’s Windows operating system.

In his second tenure as chief executive, Jobs shepherded the creation of such technological innovations as the iPod, which revolutionized the personal music player; the iTunes online store, which changed the way people bought and enjoyed music; the iPhone, which accelerated the movement toward smartphones; and the iPad, which dominates the tablet computer segment.

In doing so, Jobs transformed Apple into a diversified electronics company and ultimately, overtook archrival Microsoft in market value.

Apple, unlike other West Coast technology giants such as Microsoft and Google Inc., never established a research-and-development lab or major business office in Massachusetts.

“His relationship with Boston was arm’s length,’’ said Bob Davis, the former chief executive of Lycos Inc., who is now a general partner at Highland Capital Partners in Lexington. “He felt that Silicon Valley was the center of the universe. But he was still a major driver of the Boston ecosystem when you think of all the wireless app companies that Apple fueled.’’

Davis recalled selling a Highland-backed start-up, Quattro Wireless of Waltham, to Apple two years ago only to watch Apple move the company’s operations to California.

Metcalfe said he first met Jobs in 1979, when Jobs invited him to join Apple. Metcalfe declined, because he was hatching his own company, 3Com, but the two men stayed in touch.

“He was incredibly generous in his dealings with me, even after I turned down his offer,’’ Metcalfe recalled last night. “In fact, Apple became one of 3Com’s first customers.’’

Jobs’s most impressive quality, Metcalfe said, is “what people call his ‘reality distortion field.’ You see the world differently when you’re with him. He’s both visionary and persuasive.’’

Another entrepreneur, Robert Poor, cofounder of Boston-based Ember Corp., worked with Jobs at NeXT, the company Jobs founded after leaving Apple in 1985. Poor recalled Jobs as a decisive leader who could be “famously vitriolic’’ if you reported directly to him.

But he was also a genius at product design, Poor said.

“He could envision stuff that people could use and would use well before people had the slightest clue of why,’’ Poor said. “When people were trying to put more and more features into a PC, he said, ‘Listen, I’m going to give you a computer that your Aunt Susan can use.’ ’’

James Glanville, a former Apple executive who left the company a few years ago and now lives in Newton, said that the “juggernaut’’ that Apple has become will be sustained by the exceptional leadership team Jobs has built since returning to the company.

“He is the ultimate perfectionist and extremely hard to work for because it’s hard to do perfection all the time,’’ Glanville said, but for the last three or four years the company “has been running like a perfect racing machine and the momentum from that has the potential to last a long time.’’

Steve Garfield, a Boston online video personality, consultant, and author, remembered being wowed by Apple at the Boston Computer Society meeting in 1984, when Jobs introduced the first Macintosh computer to an enthusiastic crowd of local computer hobbyists.

“He took the Macintosh out of a bag and let it introduce itself, in that computer voice,’’ Garfield recalled. “The audience went absolutely crazy. People were screaming.’’

Garfield bought that first version of the Macintosh, and since then has purchased “at least 10 Apple products: a bunch of iPods, iPhones, Macbooks, iPads. What I like about them is that you just turn them on and they work.

“Take a look at the remote control to your cable box, with all its buttons, then look at an iPhone,’’ Garfield said. “That shows you how Jobs charted a completely different path.’’ 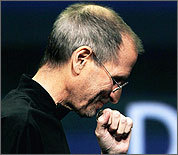