Google to pay US $500m in drug ad inquiry 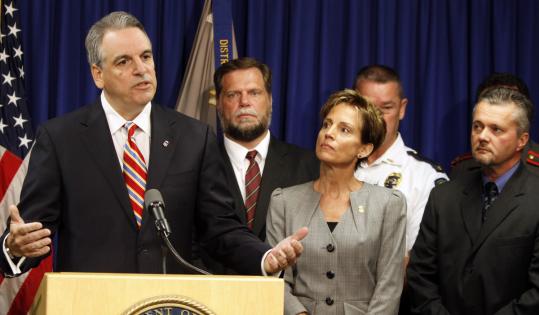 In one of the biggest settlements of its kind in US history, Google Inc. has agreed to pay $500 million to the Justice Department and admitted that the company’s advertising service helped online pharmacies sell prescription drugs illegally.

US attorney for Rhode Island Peter F. Neronha revealed the agreement with the Internet search giant at a press conference in Providence yesterday. Neronha’s office led an investigation of Google’s role in the online pharmacy ads that began in 2009 and involved the Food and Drug Administration and the Internal Revenue Service, as well as Rhode Island authorities.

Federal regulators have banned the sale of prescription drugs from foreign countries because they cannot ensure their safety.

As early as 2003, Google “was aware of these advertisements by Canadian online pharmacies, and that these pharmacies were in fact unlawfully shipping prescription drugs into the United States,’’ Neronha said. Google actively assisted the pharmacies in developing advertising strategies that would enhance their sales, and its own revenues, he said.

In an e-mailed statement, Google acknowledged wrongdoing. “While we banned the advertising of prescription drugs in the US by Canadian pharmacies some time ago, it’s obvious with hindsight that we shouldn’t have allowed these ads on Google in the first place,’’ the Mountain View, Calif., technology company wrote.

In the past, the company successfully defended itself against lawsuits over ads placed through Google by saying it did not write the ads, so it should not be responsible for their content.

“Certainly it is not common for search engines to be held responsible for their advertisements,’’ Neronha said. “Frankly, that was a source of a great deal of concern on the part of the legal team.’’

Federal investigators, however, concluded that Google had crossed a line by actively helping the online pharmacies improve their advertising strategies, he said.

The settlement may open the door for more government investigation of Google’s role in placing questionable ads, said Ben Edelman, assistant professor at Harvard Business School and a consultant on Web advertising fraud.

Google is “still running various ads that are deceptive, and, I’m confident, unlawful,’’ Edelman said. “I wouldn’t be surprised if some state attorneys general are more aggressive after seeing the wrong righted by this investigation, and the opportunity to put an end to other deceptive ads at Google.’’

Examples of deception, he said, are ads that charge for programs or services that are actually free, such as the Internet calling service Skype; or ads that make deceptive mortgage modification offers by posing as a service affiliated with the US government.

The case throws a spotlight onto the massive trade in discounted drugs from Canada, which are sold online to US buyers. Federal officials said that American consumers seeking less expensive medicines often buy from online pharmacies that offer medicines from Canada.

But Kathleen Martin-Weis, acting director of the FDA’s Office of Criminal Investigations, said the sites sell mainly counterfeit drugs, or medicines that have expired. In any case, federal law generally forbids the importation of medicines from retailers outside the United States because the FDA cannot verify the safety of such drugs.

The Google inquiry began after the 2008 arrest in Mexico of David Whitaker, who had fled a financial fraud investigation. Under questioning, Whitaker revealed that while hiding in Mexico, he had set up websites that purported to represent pharmacies in Canada, and Google’s AdWords advertising system played a major role in helping him succeed. He said the Google employees knew what he was doing, and that it was illegal, but that they helped him nevertheless.

Whitaker offered to assist a federal investigation of AdWords. In early 2009, and with his help, members of the federal task force set up seven websites purporting to sell drugs exported from Canada. No drugs were actually sold to consumers, but undercover agents contacted Google in order to purchase advertising space on the company’s hugely popular search site.

Armed with evidence from the undercover inquiry, the task force launched a grand jury investigation in mid-2009 that uncovered multiple instances, dating back to 2003, in which Google employees actively helped illegal pharmacy sites improve the effectiveness of their advertising.

Once Google became aware of the investigation, the company began to modify its advertising policies. Today, it accepts ads for prescription drugs only from companies certified by the National Association of Boards of Pharmacy and bars any ads from Canadian pharmacies.

Neronha said that about a third of Google’s penalty covers the company’s revenue from the pharmacy ads between 2003 and 2009, while two-thirds covers the estimated revenue earned by the pharmacy sites themselves. The money has already been wired by Google to a Justice Department account, he said.

The settlement is the latest legal black eye for Google. In March, the company agreed to have its privacy policies audited for 20 years to settle an inquiry by the Federal Trade Commission into Google’s social network service Buzz. And last year’s revelation that Google’s Street View mapping service had intercepted wireless Internet traffic from individuals around the world spawned a host of investigations and lawsuits. The governments of South Korea, Australia, and New Zealand each found Google in violation of privacy laws; in March of 2011, France punished Google with a fine of $142,000.

Google insisted that the alleged privacy violations were unintentional. But Scott Cleland, author of “Search & Destroy,’’ a book highly critical of Google, said it will be harder to explain away the actions that led to the settlement revealed yesterday.

“The Department of Justice has said they have knowingly done this behavior for over six years,’’ Cleland said. “There’s no way for them to put a white hat on this.’’

Michael Warshaw of the Globe staff contributed to this report. Hiawatha Bray can be reached at bray@globe.com.