Verizon workers back on job, but still worried 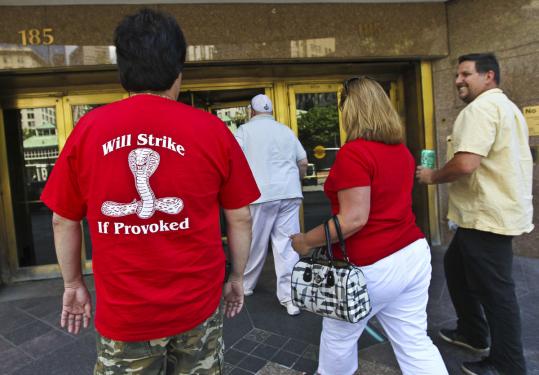 The job action is over, but many unionized Verizon workers continued to show solidarity over their contract dispute with the telecom giant.

Back at work after ending the strike Saturday without getting a new contract from Verizon Communications Inc., some unionized workers continued to wear the same red T-shirts they sported during the two-week walkout; some of the shirts sported slogans such as “Will strike if provoked.’’

“We still don’t have a contract, so as a show of solidarity we’re wearing our red union shirts,’’ said John Dion, a service assistant.

At Verizon’s New England headquarters in downtown Boston, some union workers reported the atmosphere inside was tense, as they returned to work alongside managers and nonunion employees whom some had heckled just a few days earlier.

“It’s an uncomfortable atmosphere and it’s very tense in there,’’ said James Reilly, a Verizon customer service employee, speaking outside the downtown Boston office. “Nobody is really comfortable because we don’t know what’s going to happen.’’

One customer service representative said her supervisor, who had to cover for her during the strike, gave her an icy reception as she returned to a pile of service requests.

“My specific supervisor is not as warm and friendly as usual,’’ said the union worker, Sharon Akhimienho.

But Dion, 43, said his supervisor was relieved to see the striking workers back because the workload had become so great.

“The manager that was doing our work was so glad to have us back,’’ said Dion.

The 45,000 Verizon workers who belong to the International Brotherhood of Electrical Workers and the Communications Workers of America ended their work stoppage Saturday, after negotiators met with Verizon chief executive Lowell McAdam and other company representatives in Washington, D.C., on Friday. Union representatives had promised they would call off the strike once Verizon showed a willingness to bargain on key contract issues.

The unions have said Verizon was pressuring them to accept many concessions, including a freeze in pensions, weakening of some job security rules, and higher health care premiums.

Verizon says it needs to save on labor costs because its landline division is losing customers, facing competition, and operating in a poor economic climate.

Now, union members are working under the previous contract and hoping their representatives can negotiate a new contract with the company in the coming months.

Some, like Reilly, aren’t so sure a deal is in the offing and worry that there could be another strike if negotiations stall again.

“It could all hit the fan in a couple of weeks,’’ said Reilly, who started a personal strike fund Sunday for the first time in his 18 years with Verizon.

Even the public statements from the two sides suggest they remain far apart - in tone at least.

Myles Calvey, a business manager with IBEW, Local 2222, who represents New England workers, said he was surprised to hear the company’s public statements following a seven-hour negotiation session Friday. Verizon representatives had commented that they had not budged on any of their demands, yet Calvey said that is the opposite of what they agreed to at the meeting.

“That kind of makes everybody scratch their head,’’ he said. “This is absolutely the strangest bargaining session that I’ve been involved in in my life.’’

Phil Santoro, a spokesman for Verizon, contends that the company’s statements since the meeting Friday are accurate.

“All of the major issues that were on the table when the guys went on strike are still on the table,’’ he said.

Calvey said negotiations will continue next week and he hopes a contract can be reached by the end of the year.