Verizon Communications Inc. has taken its battle with 45,000 striking union employees to the public by running ads about how well paid its Boston technicians are, with $85,000 in annual pay, four weeks’ paid vacation, and $51,000 in total benefits to an employee and family members.

Yet what Verizon does not say is that the $85,000 includes overtime pay. Union officials contend technicians in Boston would have to work the equivalent of two months of overtime to earn $85,000 a year.

Moreover, the workers won’t be getting $51,000 in combined benefits if Verizon has its way in contract talks. The company is seeking substantial concessions on that front, including freezing pension benefits and requiring employees to pay several thousand dollars a year in premiums for health insurance.

Union officials dispute Verizon’s estimation that the benefits are worth $51,0000, as well as the dollar value the company has assigned to each concession.

The striking unions, the Communications Workers of America and the International Brotherhood of Electrical Workers, counter in their own ads that Verizon is launching an assault on those trying to make a middle-class living.

Yet in corporate America, the current Verizon compensation package for unionized employees is increasingly the exception, not the rule.

Many other companies have trimmed benefits like those Verizon wants to reduce. And the potential loss of job security and retirement security - issues at the heart of the dispute - has already become a reality for many middle-class families.

Analysts say the company’s demands are in line with what other US workers can expect. Verizon is seeking to increase 401(k) contributions, in exchange for limiting pensions, and wants more flexibility with job assignments.

“The fundamental issue here is that a larger amount of risk is now being shifted on the employee and what will be the retiree,’’ said Gene Carroll, director of the Union Leadership Institute at Cornell University.

The unions went on strike Aug. 7 after rejecting Verizon’s demands for contract concessions they argue would cost each employee about $20,000 and $1 billion in total.

The strikers primarily include technicians and customer service representatives who work in Verizon’s wireline business, which includes landline telephones and high-speed Internet and television services.

Verizon is looking to cut costs in the wireline division, which has lost 60 percent of its landline customers in the past decade. At the same time, the number of cellphone customers grew to 94 million.

Neither side agrees on even the most basic numbers involved. It is also difficult to verify union or company claims.

For example, Verizon says its demands on health insurance premiums would cost workers $1,200 to $3,000 a year. The union said such changes would cost $3,000 for individuals and $6,800 for a family.

If the strike continues into the end of the month, Verizon says it will suspend health and medical benefits for the striking workers.

What is clear is that the unions’ current health coverage is unusual. Employees pay deductibles, but nothing toward the insurance premium.

Very few employees do not pay a portion of their health insurance premium. The Kaiser Family Foundation and the Health Research & Educational Trust estimated that, in 2010, single workers paid an average of $899, and workers with families paid $3,997.

Their survey also found that 30 percent of employers “reduced the scope of health benefits or increased cost sharing’’ in 2009, citing the poor economy.

The unions say they were willing to negotiate about health care premiums, but that Verizon’s additional demands - to limit sick days, eliminate some holidays, and strike a job-protection clause - were too much to consider.

Another major point of contention is retirement benefits.

Currently, unionized employees are eligible for a pension that would pay them a portion of their salary. Verizon wants to freeze pension contributions for current workers, eliminate them for future employees, and instead contribute more money to an existing 401(k) plan.

Verizon’s offer, to pay an additional 6 to 9 percent into 401(k) plans, appears “quite generous,’’ said Andrea Terrillion, a member of a labor relations panel at the Society for Human Resource Management. But, she added, it would also be a better deal for Verizon than funding a full-blown pension plan.

“In terms of funding someone’s entire pension, it’s more reasonable versus the cost being solely on the employer,’’ said Terrillion.

Fewer workers in recent years have had the option of relying on a pension, which provides a defined payment over a set period. A 401(k) plan offers fewer guarantees, because the employee is responsible for getting investment returns that are sufficient to fund his retirement.

“Look at what’s happening in the stock markets,’’ Carroll said. “There have been hundreds of millions of dollars in retirements that are being put in jeopardy.’’

As for job-security provisions, Verizon says it wants to reassign employees as business needs shift. The company says employees hired before 2003 would continue to have a lifetime job guarantee.

Union officials said the company’s demand is a ploy to outsource jobs, particularly customer service representatives, to overseas centers that are cheaper, resulting in the elimination of many jobs here.

Verizon, he said, “wants more flexibility, and they argue that it makes them more competitive because they are not restricted by the limited negotiations with the unions on layoffs.’’

“It does open up the outsourcing of jobs, and that’s slowly beginning to undermine the union’s power in the workplace.’’

Click the image below to see a larger version of the ad. 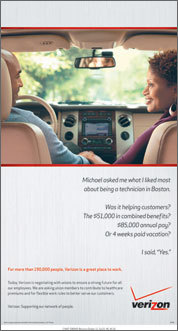