A gadget able to extract energy from thin air 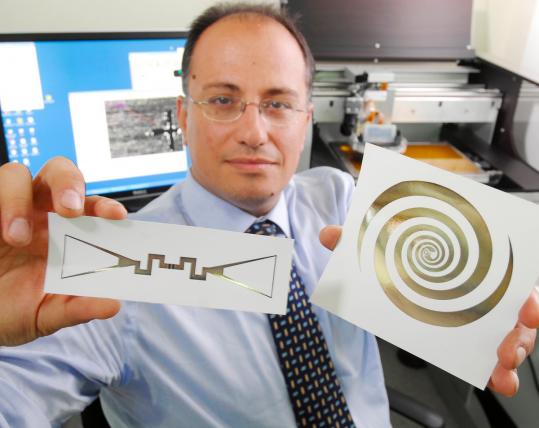 Prototypes
Engineers are working on all sorts of devices that can scavenge energy for the mobile devices we depend on, and which drain their batteries all too quickly.

Battery dead because you forgot to switch off your Wi-Fi setting? No problem. Some devices can capture and convert sunlight, heat, and wind into juice for your tablet PC.

Soon, an energy-harvesting device mounted inside one of your shoes might also give your smartphone a boost.

And now computer scientists at Georgia Tech have invented something that sounds as if it came from the mind of Nikola Tesla. That’s because the prototype gadget, which works with an antenna and other components, made with nanoparticles of silver and other materials on an inkjet printer, can draw energy out of thin air.

The energy the Georgia Tech researchers, including professor Manos Tentzeris (above), are gathering comes from radio and television transmitters and cellphone and satellite networks.

So far, the device is able to gather enough juice to power small sensors and RFID tags. For example, the researchers last week said they had managed to gather enough energy from a TV station a half-kilometer away to power a small temperature sensor.

The Georgia Tech researchers also envision making wearable health-monitoring devices that get their power from ambient energy. The devices, made using the scientists’ inkjet printing techniques, would have components that are lightweight and paper-thin.

Even if such ambient-energy gathering devices couldn’t power more than small sensors and chips, they could supplement the juice gathered by solar cells, the researchers said.

Earlier this year, this column featured a couple of neat controllers for iPad gamers. One, the Fling, is a translucent, rubbery thing that covers the on-screen directional pad in iPad games. The other is the Joystick-It, an aluminum joystick that sticks to the tablet and will have you waxing nostalgic (if you are of a certain age) for the days when you played Ms. Pac-Man on an arcade console. Both seem as if they would be great for mobile fun.

But accessories small enough for phone use seem like they would appeal only to the hardest of the hardcore gamers. Ten One Design LLC last week announced the Fling Mini (about $25), which has a suction cup base that covers the same spot on your smartphone’s screen the original does on the iPad.

Ten One says the Fling Mini’s spiral design (you place your thumb in the center of the spiral) creates tactile resistance that improves play in games for the iPhone or iPod Touch, such as Meteor Blitz, Robokill, and Blade of Betrayal. The removable Fling Mini comes in a two-pack, with a fiber bag for storage.

The other even-more-mini gaming accessory is the Joystick-It Phone Arcade Stick from ThinkGeek Inc. (about $18), which also attaches to your iPhone’s screen.

ThinkGeek says that any one of the thousands of game apps that have on-screen control pads will work with the joystick, and it will also work with the capacitive touchscreens on many Android smartphones.