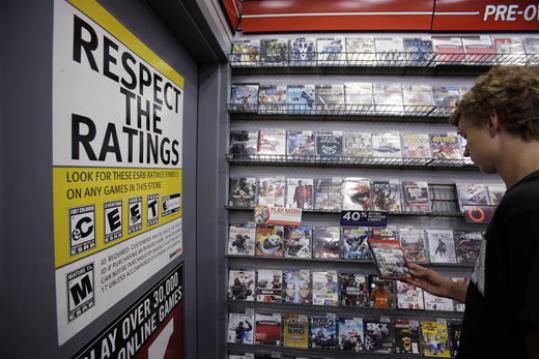 Greater Boston video game makers welcomed a ruling from the US Supreme Court yesterday that struck down a California law restricting the sale of violent video games to minors.

“We are creating art, and art should be treated as art, whether it’s in a game, a book, or a movie,’’ said Albert Reed, studio director of Demiurge Studios Inc., a game development company in Cambridge.

The Supreme Court extended to video game makers free speech guarantees that have long been associated with books, music, and movies. Writing for the majority, Justice Antonin Scalia said that access to video games is protected by the First Amendment to the US Constitution, and that minors have broad rights to read or view what they wish. Scalia wrote that states may place some limits on those rights, but the California law’s definition of violence was too vague, and the state presented no persuasive evidence that playing violent games is harmful to minors.

California “wishes to create a wholly new category of content-based regulation that is permissible only for speech directed at children,’’ Scalia wrote. “That is unprecedented and mistaken.’’

Scalia further wrote: “California’s argument would fare better if there were a longstanding tradition in this country of specially restricting children’s access to depictions of violence, but there is none. . . . Grimm’s Fairy Tales, for example, are grim indeed.’’

“I think the court rightfully expressed their skepticism about the right to restrict speech,’’ said Ken Levine, creative director for Irrational Games in Quincy, which developed the hit video game BioShock — a “shooter’’ game, meaning that players progress by using virtual firearms to vanquish adversaries.

Some best-selling video games, including Grand Theft Auto and Call of Duty, feature intense and often gory fistfights and gun battles. In 2005, California lawmakers passed a bill that would have banned the sale or rental of such games to people under age 18. The law had been stayed by a federal court and was never enforced. Yesterday’s 7-to-2 Supreme Court ruling ensures it won’t be.

“I have heard a sigh of relief,’’ said attorney Stephen Riden, a partner at Beck Reed Riden LLP in Boston who works with video game companies. Had the California law been upheld, Riden said, game companies would have had to adopt a different strategy for selling their products in the nation’s most populous state. Other states might have passed similar laws, leading to a patchwork of inconsistent and costly regulations.

“It would have changed the way that any local developer would distribute its games,’’ Riden said. “Now it’s not a problem.’’

Yesterday’s ruling may not be the last word on efforts to regulate violent games. Joining with the majority, Justice Samuel Alito and Chief Justice John Roberts issued a concurring opinion suggesting they’d be willing to support a more narrowly drafted law. Although Alito and Roberts conceded that the California law’s definition of a violent video game was too vague, they said it may yet be acceptable for states to limit the exercise of First Amendment rights when minors are involved. Alito and Roberts cited a 1968 ruling that upheld a law against selling sexually suggestive magazines to minors, even though the same magazines could be sold to adults.

In separate dissenting opinions yesterday, Supreme Court justices Clarence Thomas and Stephen Breyer each backed the California law. Breyer rejected the argument that the California law was too vague, and said it imposed “no more than a modest restriction on expression.’’

Thomas went further, asserting that a child’s First Amendment rights are entirely subject to the wishes of parents, which are bypassed when video games are sold directly to minors. “The freedom of speech, as originally understood, does not include a right to speak to minors without going through the minors’ parents or guardians,’’ said Thomas.

The ruling was bad news for Common Sense Media in San Francisco, a media watchdog group that filed a friend-of-the-court brief urging the court to uphold the law. James Steyer, Common Sense Media’s chief executive, called the ruling “a disappointing but not unexpected decision.’’ But he said though the law never took effect, it goaded the video game industry to tighten its rating system, designed to help parents decide which games their children should play.

Michael Gallagher, president of the Entertainment Software Association, the US video game industry’s leading trade association, celebrated the ruling. “The court’s decision today is just an overwhelming endorsement of the First Amendment,’’ Gallagher said. “It’s also a great victory for parents and the rights of parents. . . . The court’s decision says very clearly that they are to be in control, not the state.’’

The association encourages retailers to avoid selling violent or sexually explicit games to minors. An undercover shopper survey conducted by the Federal Trade Commission and published in April found that minors attempting to buy such games were turned away by 87 percent of the retailers tested.