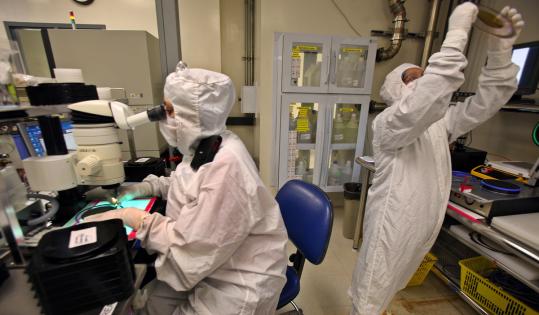 Skyworks Solutions Inc. in Woburn makes chips used in smartphones and other devices. (Michele McDonald for The Boston Globe)
By Hiawatha Bray Globe Staff / May 24, 2011

Massachusetts doesn’t make the iPhone. But this is where chips are made that make it ring.

The big names in consumer electronics — like Apple and Dell — manufacture their glamorous gadgets elsewhere. But Massachusetts has staked out its own corner of the lucrative consumer electronics market: sophisticated chips and components found inside popular must-haves like the iPhone and iPad, both from Apple.

Thanks to a booming market for mobile devices and other gadgets around the world, the state’s technology companies are creating thousands of jobs and driving the local economy’s recovery.

“What really jumps out is the robustness of the state’s technology sector,’’ said Martin Romitti, director of economic and public policy research at the University of Massachusetts’ Donahue Institute. “The companies that are here are doing tremendously good sales and having tremendously good profits.’’

Much of the sector’s strength derives from strong overseas sales. The state exported $7.5 billion in computers and electronics gear last year, nearly $1 billion more than in the previous year. That helped to add 7,500 new Massachusetts jobs in professional, scientific, and business services from March 2010 to March 2011.

“We’re seeing a major return, nationally and internationally, to investment in technology of the kind that we provide,’’ said Gregory Bialecki, the Commonwealth’s secretary of housing and economic development. “The international demand has recovered more rapidly than domestic demand.’’

Skyworks Solutions Inc. in Woburn is reaping huge benefits from the global market in mobile devices. The company makes specialized chips used in smartphones, tablet computers, and countless other gadgets. And although Apple is famously secretive, insisting that its suppliers not discuss their relationship with the device maker, the Web is crowded with tech blogs and investment analysts who report that there are Skyworks chips in iPhones.

“You’d be hard pressed to name a smartphone manufacturer or cellphone or tablet [manufacturer] who doesn’t use our products,’’ said David Aldrich, chief executive of Skyworks.

The company has come a long way since the recession. Skyworks’ income surged last year to just over $1 billion. “We bounced right back from it,’’ said Aldrich, “and we never went anywhere near the red.’’

While consumer electronics companies usually have their finished products made in China, Skyworks makes all its chips in Woburn and in a second plant in California, then ships them to the factories in Asia that are building consumer gadgets. “We’re probably the biggest exporter of technology around the world from Massachusetts,’’ Aldrich said.

Compared to Skyworks, LogMeIn Inc., also of Woburn, is practically a household name. Millions have downloaded its free software to let people remotely control their desktop computers. But the company’s surging growth comes mainly from corporate road warriors who rely on LogMeIn to access vital files, and corporate tech-support services that use it to repair customers’ cellphones.

Since 2007, LogMeIn revenues nearly quadrupled to $101 million last year, with about 30 percent of its sales coming from abroad. It has 415 workers, half of whom are in Massachusetts, and plans to add about 100 jobs over the next 12 months.

Pegasystems Inc. of Cambridge is a software company whose products also work mostly behind the scenes. It writes business automation software that integrates a company’s multiple computing systems, so that products from different vendors can work together. Alan Trefler, Pegasystems’ chief executive and founder, said the software drastically cuts management costs. “We save them a fortune,’’ he said.

With sales of $337 million last year, much of it from exports, the company barely noticed the recession. Pegasystems plans to hire 100 more workers this year, including 75 in Massachusetts.

Of course, exports and the mobile device boom are not the whole story of high-tech prosperity in Massachusetts. Domestic demand for the state’s products is growing, as well, mostly from companies recovering from hard times and getting ready to expand again.

Massachusetts is also a favorite shopping destination for the Pentagon, which issued $15.6 billion in military contracts to Massachusetts companies in 2009. That has meant plenty of business for Mercury Computer Systems Inc. of Chelmsford, which builds high-performance computing subsystems that add intelligence to major weapons like fighter planes or surveillance drones. “When you see a lot of the pictures that are coming from the battlefield, it’s our equipment that’s powering much of that,’’ said chief executive Mark Aslett.

Defense contractor ITT Corp. uses Mercury computers in a system supplied to American soldiers; it analyzes and jams cellphone signals to prevent the detonation of roadside bombs in Afghanistan. “It identifies anything that could be a trigger and jams it momentarily, so the people and the vehicles can move safely through that zone,’’ said Ed Palacio, vice president of program management for electronic systems at ITT.

Perhaps the biggest challenge to the state’s technology boom is a lack of workers with advanced technical skills. “You see a lot of tech companies around the state saying they have real skill shortages,’’ Romitti said.

Products made in Mass.