Solar energy — as easily as unrolling a yoga mat 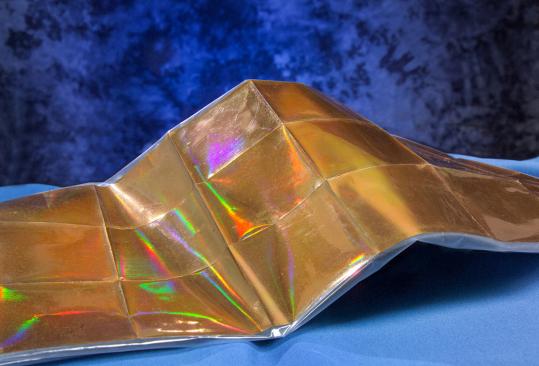 Prototypes
Yes, you have heard it before: In five years, solar panels will be super-flexible and incredibly efficient — capable of powering everything from smartphones to homes after a few hours in the sun.

This time, it may be real.

Cambridge-based MicroContinuum Inc. is working with researchers at the University of Missouri, University of Colorado, and Idaho National Laboratory on “nantennas’’ — small antennas that gather much more energy from the sun than existing solar cells.

MicroContinuum’s challenge is to form nantennas into thin, flexible sheets that can be produced inexpensively in high volumes. Those thin sheets could then be incorporated into building materials and other products. Imagine a roll-up sheet, like a yoga mat, that you can toss over any structure, or roof tiles whose outermost layers are laced with nantennas.

The nantennas, according to a University of Missouri announcement, will collect 90 percent of available light.

Current solar panels capture only 30 percent of the sun’s energy, at best, the researchers said.

And yes, prototypes of the flexible film should be available within five years, they added.

Technologies similar to nantennas might include infrared sensing devices that can spot contraband at airports or be incorporated into line-of-sight communications and optical computing, the researchers said.

This phone is smart about simplicity

It’s a smartphone whose functions a 5-year-old can master, which means it’s one I am going to love.

I recently gave a Samsung Infuse 4G to a 5-year-old, only to suffer unflattering photos of Baba (that’s me) in the blinding LED flash on the device’s outward-facing, 8-megapixel camera.

She had no trouble swiping her fingers or completing a puzzle to unlock the Infuse’s screen, navigating its app icons, or perusing maps.

The Infuse comes with apps and functions that you can use to quickly upload media and updates (typed via an onscreen virtual keypad) to Facebook and other social networks.

The Infuse is also shipped with the popular game Angry Birds. It’s available from AT&T Inc. for about $200 with a two-year contract and a minimum $15-per-month data plan.

We took the Infuse for a ride with the powerful Jabra Freeway stereo speakerphone (about $130 at Amazon.com). The Freeway paired seamlessly with the Infuse, which did not even prompt me to enter a pairing code.

The Freeway accepts voice commands. And it speaks to tell you your current connection status and battery level.

Expect up to 14 hours of talk time per charge, and more than a month of standby time.