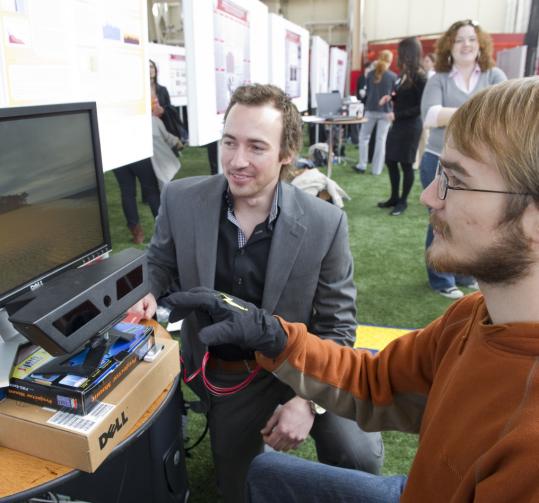 I suppose there are obstacles that can come between you and victory in the fantasy video games Darkspore and Diablo. If you are a young gamer, Mom and Dad might object to the violence in these titles. Or you might lack the patience to follow the storylines.

And then there are those who would play more games on their PC computers if they had something easier to use than remote controllers and keyboards.

So that people with limited use of their hands might enjoy the pleasures of gaming, a Dutch engineering student at Northeastern University is developing a new interface system, one that uses an eye-tracking device and a data-gathering glove to replace the inputs most of us use with PCs.

The eye gaze-controlled system, designed and recently demonstrated by Jeffrey Breugelmans at Northeastern’s Intelligent Human-Machine Systems Laboratory, uses the eye-tracking device to replace the on-screen pointing-and-clicking a player would otherwise do with a mouse.

Breugelmans says he plans to begin testing the eye-gaze controlled system with gamers with disabilities next fall.

Breugelmans is also developing a gaming interface that uses a headset. Wearing that, players of PC games can use their minds alone to control the action on-screen.

What I’ve discovered in the course of writing about dozens of iPod docks is that they are similar to microwave ovens (at least in my experience). Most exhibit similar quality and workmanship, and I cannot say I have been terribly impressed with either.

So it was a rare pleasure last week to drop my iPod into the cradle of the Cue Radio Model R1 and hear just how glorious Michael Giacchino’s score for the latest “Star Trek’’ film can sound on a compact system.

The R1’s controls, for tuning in AM/FM radio stations and navigating through the menus on your iPod and iPhone, are intuitive. Through an auxiliary port, you can connect other music sources, such as an iPad.

And it has a built-in alarm clock.

There is something appealing about knowing that the R1 and its matching satellite speaker, the Model S1, are assembled in Massachusetts. The manufacturer, Cue Acoustics Inc. (cue.com), is based in Somerville.

Most of the S1’s parts also come from US-based manufacturers, according to Cue.

I recommend adding the S1 speaker (a combination package that costs about $480 and comes with a 10-foot cable) to get full stereo separation when listening to your tunes.

While the Model S1 has been around for a while, Cue says that in the past year or so it has been steadily improving the product. Tweaks included improved sound quality through software enhancements, a “talk’’ sound preset for talk radio listening sans booming bass, a daylight savings feature for the S1’s clock, and the ability to add custom images to the device’s screen.