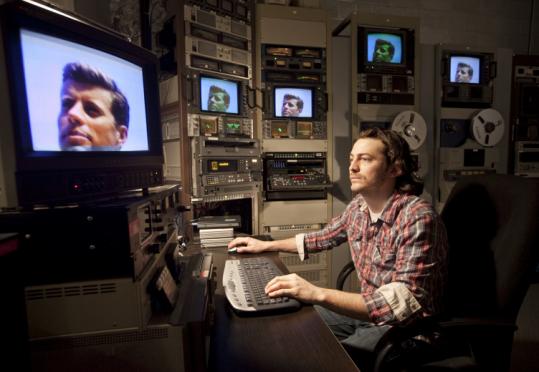 Iron Mountain’s facilities include one in a cave in Pennsylvania where John F. Kennedy administration records are preserved. (Tom Kates for The Boston Globe/ File 2010)
By Hiawatha Bray Globe Staff / April 20, 2011

In a peace offering to dissident shareholders, Iron Mountain Corp. said it will consider giving up on its digital storage business, add two members to its board, and explore the possibility of converting the company to a real estate investment trust, or REIT.

The measures seemed to appease Elliott Management Corp., a New York investment firm that owns slightly less than 5 percent of Iron Mountain’s shares. Elliott has pressured the management of Iron Mountain, a document storage company based in Boston, to find a new strategy to increase returns to shareholders.

Iron Mountain launched a strategic review in the fall “and concluded that the company could not continue investing in technology development and meet its return requirements,’’ chief executive Richard Reese said in a statement.

Founded in 1951, Iron Mountain mainly stores physical documents, computer tapes, and disks in secure warehouses for companies that must preserve vital records for long periods of time. In 2002, the company launched an effort to become a major provider of online storage for computerized business data.

Iron Mountain took a charge against earnings of $284 million in the final two quarters of 2010, due to problems with the digital business.

The company will now explore “strategic alternatives for the digital business,’’ which could mean selling off the operation. Iron Mountain would still offer digital services to its customers, but through partnerships with other companies.

Brian Babineau, vice president of the consulting firm Enterprise Strategy Group in Milford, said that when Iron Mountain began offering digital storage in 2002, few others were in the market. But today, “there are a lot of companies that offer similar services to what Iron Mountain has in their portfolio.’’ And many of them are giants like IBM Corp., Oracle Corp., and EMC Corp., the huge data storage company that is based in Hopkinton.

Babineau said that Iron Mountain is still mainly a paper storage company, and ill-prepared to tangle with those high-tech titans.

In March, Elliott said that while Iron Mountain’s traditional business is strong, the company’s decadelong effort to provide digital data-storage services would never pay off. The money invested in that effort should instead be returned to stockholders, Elliott said, in the form of higher dividends or share buybacks.

In addition, Elliott favored converting Iron Mountain to a REIT, a structure often used by major holders of commercial real estate. For example, Boston Properties Inc. is a REIT that owns dozens of office buildings in Boston, New York City, and Washington, D.C.

In return for a lower tax liability, a REIT is required to pay at least 90 percent of its earnings directly to shareholders.

“The company produces a huge amount of free cash flow,’’ said Vishnu Lekraj, senior equity analyst at Morningstar Inc. in Chicago. “Some investors feel they need to give back cash to shareholders. A REIT will force them to do so.’’

But Iron Mountain’s board rejected the idea in March, saying the company owns just 35 percent of its storage warehouses.

A Morningstar analyst, Jason Ren, said that to be a REIT, 75 percent of a company’s assets must be in the form of real estate, and it must generate at least 75 percent of its revenue from real estate-related activities. Iron Mountain generates the bulk of its revenue from its storage business, Ren said, and might have to get “a bit creative’’ to become a REIT. For example, it might spin off its real estate holdings into a REIT, and Iron Mountain could lease the space for storage.

In March, after Elliott nominated four people to Iron Mountain’s board, the board fought back with a “poison pill’’ plan to make a hostile takeover far more expensive. Last week, Iron Mountain said it would eliminate two of its digital storage offerings and ousted chief executive Bob Brennan, who had arrived in 2004 and who championed the online data strategy.

Brennan was replaced by Reese, who was chief executive from 1981 to 2008, overseeing vast growth in the core business of storing physical documents.

Yesterday, Iron Mountain said it would add one of Elliott’s candidates to the board, as well as an independent candidate to be chosen by mutual consent. In addition, the company will pay $2.2 billion to shareholders in dividends and share buybacks through 2013, with $1.2 billion to be paid within a year.