At Kayak, the goal is seven days from recruit to employee 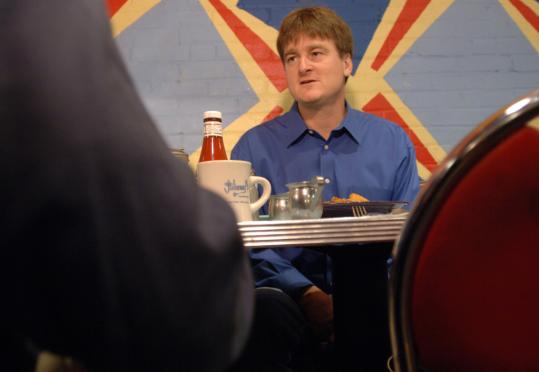 Paul English, cofounder of Kayak, (seen in a 2005 photo) has a “seven-day rule’’ when it comes to hiring. He wants the process, from first contact to job acceptance, to be completed in seven days. (The Boston Globe/File 2005)
By Scott Kirsner Globe Correspondent / April 10, 2011

Mike Bernardo was weighing an attractive job offer from Apple. Khurrum Chaudhry was happily working in Lahore, Pakistan. Giorgos Zacharia was starting his own company in Winchester.

All three were lured to jobs at Kayak.com, the travel planning site that has its technology headquarters in Concord. Paul English, Kayak’s cofounder and chief technology officer, may be the most aggressive recruiter of tech talent in Massachusetts.

English says Kayak, which last year filed paperwork for an initial public offering, is doubling its office space in Concord, and plans to double the size of its team there over the next 18 months. To build that team, Kayak, which reported 2010 revenue of $171 million, has to compete with rivals like Expedia Inc. ($3.3 billion in 2010 revenue) and search giant Google Inc., which is expanding into the travel business with its purchase of Cambridge-based ITA Software Inc.

English is like a baseball scout with an incredible network of tipsters, willing to fly anywhere at a moment’s notice to see a hot prospect. “The difference between an A player and an A-plus player,’’ he has said, “is the difference between a million in revenue and a billion in revenue.’’ And yet his approach to hiring is unorthodox in the extreme.

With more than 100 employees in Concord and Norwalk, Conn., Kayak does not have a human resources department. The “jobs’’ page on its website not only doesn’t list open positions, but it doesn’t include an e-mail address, fax number, or mailing address where one might send a resume.

English also prods Kayak to adhere to the “seven-day rule,’’ which he devised while helping run a local office of software company Intuit Inc. When he first hears the name of a superstar working anywhere in the world — whether a designer, programmer, or software tester — he gives himself seven days to find the person, conduct interviews, make an offer (assuming the prospect lives up to advance billing), and get an acceptance.

English likens it to a Formula One pit crew changing a tire: “They don’t make mistakes, and they move fast, but the design of that process probably took them a year.’’

“Paul is the smartest hiring manager I’ve ever worked with,’’ says Tom Summit, a longtime tech industry recruiter who counted English as a client in the late 1990s. Key to English’s strategy, he says, is identifying talented people and selling them on Kayak before they even know they’re looking for a job: “He goes and gets them before they get to the marketplace,’’ Summit says.

English says he spends an hour or more on hiring during a typical day. He’s constantly asking Kayak employees and others in his network “Who is the best person you’ve ever worked with?’’ He’ll fire off e-mails or place phone calls to the candidates himself, being free with flattery, and asking for their advice on issues Kayak is grappling with.

Lately, creating travel-related applications for mobile phones has been a big emphasis. English and his colleagues regularly peruse Apple’s iTunes Store for mobile apps they like. When they found a photo-viewing app developed by Bernardo, a Tewksbury software consultant, English offered him a job without success. Bernardo was happy working for himself. So English asked him to build a mobile app (it helped users find taxi services near them), as an excuse to work with Bernardo for two months.

When that project was over, though, English learned that Bernardo was flying to California to talk to Apple about a job. “Just promise me one thing: Don’t accept while you’re there,’’ English asked Bernardo.

Bernardo joined Kayak last November, and immediately started working on a redesign of Kayak’s iPhone app. Zacharia, now Kayak’s chief scientist, was similarly recruited after working on a consulting project for the company. (He was considering two other offers at the time, after deciding to put his own start-up on the back burner.)

Chaudhry worked for a software development firm in Pakistan of which Kayak was a client; English persuaded him to move his family to Massachusetts so he could truly “own’’ the products he was working on.

English has developed some of his own terminology to talk about good and bad candidates. Good ones are “energy amplifiers’’; they increase the energy of everyone around them. Bad ones are too arrogant about their abilities or too humble; the right people display what English dubs arrogant humility. “It means being confident in what you’re good at,’’ he explains, “but humility to me means being curious.’’

As to why Kayak hasn’t hired a human resources executive, English says, “HR managers create process, they create meetings. They try to find a way to justify their existence.’’ (The finance department at Kayak takes care of things like health coverage and other benefits.)

Candidates tend to talk to four or five Kayak employees, and each one has veto power over whether a job is offered. The interviewers convene on the same day of a candidate’s visit to decide the next step; that prevents the process from dragging out.

Some of English’s rules on hiring are simply about showing respect and good manners. Candidates are offered a beverage as soon as they arrive, and never left cooling their heels on a couch. During interviews, Kayak employees never take phone calls or duck out to handle something more important.

Visiting Kayak last Tuesday, I experienced all of that hospitality. Because who knows? I might’ve been someone important, like a job candidate.