Verizon Communications Inc. became the second-largest cable-television provider in Massachusetts last year, with more than 280,000 customers statewide, though its growth slowed as it expanded into fewer new communities, according to figures compiled by the state.

Comcast Corp. remained the state’s largest provider, with nearly 1.6 million customers, nearly six times Verizon’s tally. But Verizon, which markets the service as FiOS TV, has slowly chipped away at the market share for Comcast and other traditional cable providers.

Verizon, long the state’s dominant telephone company, added more than 54,000 TV customers last year, an increase of 24 percent, to overtake Charter Communications Inc. as the number two cable provider in the state, according to numbers provided by the Massachusetts Department of Telecommunications and Cable.

But Verizon didn’t grow as fast as it had in previous years, when it was aggressively launching service in new towns every month. Verizon has rolled out service to 110 cities and towns in Massachusetts over the past five years, but added just four communities last year and has not announced any plans to add more. In 2009, Verizon added 66,000 customers, 12,000 more than it picked up last year.

Meanwhile, Comcast reported it lost more than 32,000 subscribers last year, a decline of 2 percent, and a decrease of 6 percent since 2006.

Company spokesman Marc Goodman chalked up the losses to a “highly competitive marketplace,’’ but noted the company remains by far the largest cable provider in the state.

Charter Communications, meanwhile, fell from the second-largest to the third-largest cable provider in the state, with fewer than 188,000 customers. Its cable customer base is down 2 percent over the past year, and down 12 percent since 2006. John Miller, company spokesman, also noted that Charter “operates in a highly competitive home entertainment environment,’’ but continues to sign new customers for the company’s combined package of TV, Internet, and phone service.

RCN, the fourth-largest provider, also slipped. It had fewer than 61,000 subscribers as of the end of the year, down 5 percent from last year and 11 percent since 2006.

RCN vice president Jeff Carlson said he thought the company has done well, however, given the larger amounts of money that Comcast and Verizon have spent on marketing to attract new customers.

“We believe we are holding our own,’’ Carlson said. Last August, RCN was acquired by a private investment fund in Boston, ABRY Partners LLC, for $535 million plus debt.

The figures don’t show how many customers subscribe to satellite television service, since they are not regulated by the state. And they don’t specifically show how many telephone or Internet subscribers the companies have added or lost.

Nationally, Verizon has reported it has signed up 28 percent of the households in areas it covers, though it hasn’t reported precise figures for Massachusetts.

But investing in fiber-optic lines to deliver video and other advanced services to homes is expensive. Nationally, Verizon is in the process of spending $23 billion to upgrade its network.

And Verizon hasn’t announced any plans to launch service in the biggest cities in Massachusetts, such as Boston and Worcester, a sign that the company isn’t sure it could recoup its investment, Leichtman says.

He pointed out that Verizon has generally focused mostly on affluent suburbs instead, where customers are more likely to sign up for pricier TV packages.

“It’s all about profitability,’’ Leichtman said. 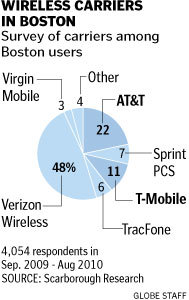