Technology’s place at the table 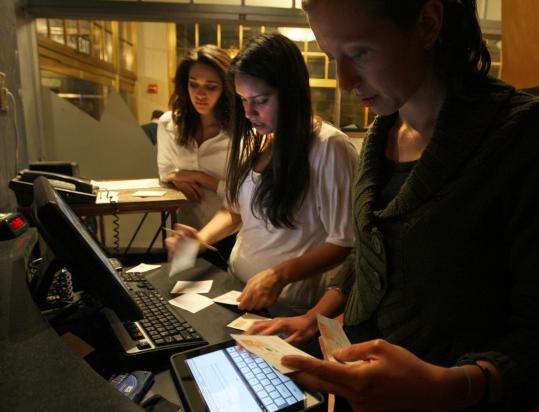 You probably text your friends and co-workers, so why not do the same with a waiter or waitress when you’re dining out? That’s the concept behind several Boston area companies that now offer ordering and seating systems based on text messaging.

Because of the region’s reputation for innovation and a large population of college students, it’s become a testing ground for new restaurant industry technology.

At Charlie’s Kitchen in Cambridge, tapping “another round of drinks’’ or “extra sauce with that’’ into a BlackBerry or iPhone is now the norm on busy nights.

“That’s the way society is going,’’ said Jaap Overgaag, manager of the Harvard Square restaurant that is trying out a new system made by Text My Food LLC, a Cambridge start-up. The service allows customers to place a food or drink order by cellphone.

“A high percentage of people have phones with them already. If your server just left, you don’t have to wave or look around, just dash off a quick message,’’ said Bob Nilsson, president of the year-old firm.

Similarly, Textaurant Corp., based in Waltham, is streamlining the process of waiting in line for a table at hotspots like Finale in Boston and Café Luigi in Bedford. “It’s not always about who has the best food, it’s who is making your life easier,’’ said Textaurant’s Josh Bob.

The technology can be used in various ways. For instance, on weekend nights at Fire & Ice in Boston’s Back Bay, customers are notified their table is ready by text, not clunky beeper. By trading in the pen and pager method for the Web-based Textaurant about a month ago, marketing manager Rafael Barbosa said, he has increased the restaurant’s hip quotient. “We like the concept, and customers absolutely love it,’’ Barbosa said.

He estimates Fire & Ice will save hundreds of dollars in lost or broken pagers by using Textaurant, which costs between $79 and $139 a month. In addition, marketers are getting something valuable — customers’ phone numbers. “We are killing multiple birds with one stone,’’ said Barbosa, who will have access to such personal data only if customers opt into the system.

Entrepreneurs who have studied the industry say restaurant owners have traditionally been slow to embrace new technology. “Now they don’t have the choice to do so,’’ said Bob.

Social media sites such as Facebook and Twitter have emerged as key restaurant marketing tools, paving the way for start-ups like Cambridge-based I Am Hungry. Founders Alexander Kravets, 22, and Michael Markarian, 24, are working to refine their restaurant discount service, accessible by the Internet, mobile phone, or Facebook. The Babson College graduates decided to focus on restaurants because, Kravets said, “There is so much opportunity and we see it so clear.’’

Unlike Groupon, a website that offers daily discounts on dining and shopping if enough people purchase coupons, I Am Hungry is free for users. So far, 100 restaurants in the Boston area, including Spike’s Junkyard Dogs — a chain whose Massachusetts locations include Boston and Somerville — have signed up, paying I Am Hungry $30 to $50 a month to offer deals such as a free hotdog with the purchase of a drink and fries.

Most of these fledgling companies are still more about potential than profits. But that doesn’t mean the entrepreneurs behind them say they are worried. “It’s the future of the industry. Food isn’t going to change drastically; how the restaurant business interacts with customers will change by leaps and bounds,’’ said Bob of Textaurant.

For example, when Temazcal Tequila Cantina opens next month in Boston’s Seaport District, customers will be handed iPads instead of printed menus. The idea, said chef and co-owner Todd Hall, is for diners to see pictures of his authentic Mexican dishes, read food history, scan nutritional information, and view recipes.

“Boston is ahead of the world. With MIT right down the street, everyone is computer literate,’’ said Hall, who developed the iPad application with Irish Web design firm RPC Consultants. “People will return to get the dish they saw, but didn’t get. It will burn into their memory.’’

One company that has already moved beyond the trial-and-error stage of incorporating the new technology into a business plan is Table Top Media of Dallas, formed in 2006. Its pay-at-the-table touchscreens, called ziosks, were recently installed at Uno Chicago Grill in the Burlington Mall. Ziosks allow customers to order food, pay their bill, and print out a receipt at their table.

“Ziosks are the intersection of brick-and-mortar restaurants, the Internet, and the social media space,’’ said John Regal, Table Top’s chief marketing officer. “People like anything that’s new and fun.’’

Maybe. Penny Mimmo, a Philadelphia resident having drinks with a friend at Charlie’s Kitchen on a recent Friday, said she is not eager to trade waiters and waitresses for more technology.

“Half the appeal of going out is interacting with the staff,’’ Mimmo said.

Across the table, Ruth Slotnick, 41, of Belmont, texted an order of fries and within minutes a waitress appeared. “It’s fun,’’ Slotnick said. But she added, “It could be a way to frustrate or abuse your waiters.’’

Eleanor Kaufman, a Charlie’s Kitchen waitress, said the Text My Food system does speed up the ordering process, but it also complicates her job.

“It’s just one more thing you have to add to your list of things to do,’’ she said. “I’d rather make a connection with customers.’’

And not every restaurateur wants to get more wired. Michael Reppucci, owner of Orzo Trattoria in North Andover, said he banned cellphones from the restaurant for Valentine’s Day. “I think texting and cellphones are out of place in a restaurant. It’s a little rude when someone is trying to have dinner and someone else is on the phone,’’ he said.

To Reppucci, restaurant texting is “gimmicky’’ and could imply that an employee is slacking off. “If you have good service and a good server that pays attention, you don’t need that,’’ he said.