Artificial intelligence based on Darwin’s idea 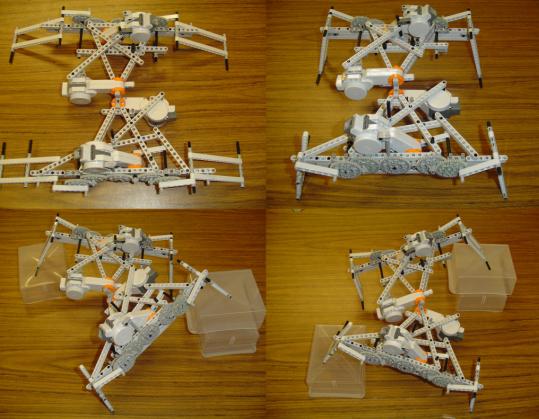 Prototypes
There are too few ethicists contemplating scenarios of a future populated by out-of-control, “differently sentient’’ beings — a job science fiction writers have been doing for generations.

But when machines start thinking for themselves, there are no guarantees robots will be thinking about anyone else but themselves.

Indeed, consider the robots at the University of Vermont that have already begun to evolve.

In an engineering first, and using the same processes of natural selection that made humans so clever, UVM roboticist Josh Bongard has created robots — both real and simulated — whose body shapes change as they learn to walk. You can see them at www.youtube.com/watch?v=ckwsvmf3slU.

Bongard said that like animals, his robots’ artificial brains evolved not in isolation, but in conjunction with their changing bodies and individual environmental challenges.

The evolving robots in Bongard’s experiment started with only a few moving parts, like tadpoles. But over time, they became creatures with four legs that walked faster, and with steadier gaits than those that were stuck with “fixed body forms’’ (as demonstrated by their responses to being knocked with a stick, for example), according to a UVM announcement.

The robots exist inside a computer program that looks like a 3-D video game, and as prototypes made from Lego kits.

I expect we will see more sophisticated personal robots coming out of evolutionary robotics, as well, including ones that can walk dogs or serve as companions to the elderly.

Softer components make robots safer to be around

Nothing seems quite so chilling as the thought of being touched by robotic hands.

I am of course thinking of the robotic hands of fiction, such as Robby’s pincers on “Forbidden Planet.’’

Now scientists are developing softer hands for the machines that in the future will perform delicate tasks.

Scientists working with The Whitesides Research Group (gmwgroup.harvard.edu/) at Harvard University recently developed a soft plastic gripper for a robot, one that can grasp a raw egg without cracking it or hold a mouse without crushing the wee creature.

The starfish-shaped grippers are embedded with elastic plastic channels that when inflated with air, expand in those areas that are the most yielding.

The result is a grip that is firm enough to lift a fragile object, but which requires none of the programming that a robot with a hard mechanical hands needs to avoid clamping down too hard on an object.

A robot with a pair of the Whitesides starfish-shaped mitts may not be as attractive as Maria, the charismatic female robot in the 1927 classic film “Metropolis,’’ but it would be capable of holding flowers without crushing them or gripping the arm of a patient without breaking bones and bruising flesh.

Robots with a lighter touch might even make good surgeons one day.