Apps in the classroom 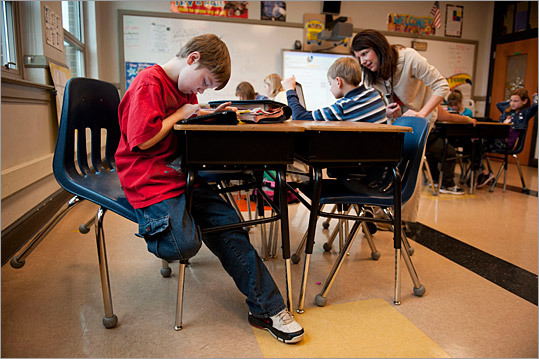 Last fall, Rebecca Allen distributed brand-new Apple iPad tablet computers instead of books to her fourth-grade class at the Rich Acres Elementary School in Martinsville, Va. The students went wild. “It was like Christmas in October,’’ the teacher said.

“It was fun watching the kids jump right in,’’ Allen added. “They are so used to technology, they took to them right away.’’

The iPads are part of an ambitious pilot program by the state of Virginia, targeted to a generation that has grown up surrounded by computer screens and digital gadgets. The devices offer a digital platform for longtime print textbook publishers like Pearson Education Inc., the British publishing firm with large divisions in Boston. Last fall, the company launched what it claims is the nation’s first-ever complete social studies curriculum for the iPad, in partnership with Virginia officials.

Houghton Mifflin Harcourt Publishing Co. has also redesigned a classic textbook to take advantage of the iPad. Since early September, around 400 students in California have been learning algebra via a new iPad-only program designed by the Boston company.

Although both publishers have been aggressively moving from paper textbooks to digital and networked products for years, the two iPad pilot programs indicate that they’re eager to explore whether such devices are the next phase for textbooks.

For the publishers, these iPad explorations are crucial initiatives. As school districts demand more technologically sophisticated teaching materials, platforms like the iPad serve as high-profile initiatives for publishers seeking valuable educational contracts. Programs that incorporate devices like the iPad can also open the door to public and private grants that are designed to encourage innovation. Many states, like California and Virginia, are also now encouraging school districts to experiment with digital textbooks as a way to save money.

Why start on the iPad, as opposed to competing tablets and electronic reading devices?

“Because this is a sexy device,’’ said Bethlam Forsa, executive vice president for content development and publishing operations at Houghton Mifflin. “Students are no different than consumers. They are excited to work with something like this.’’

The size of the educational market justifies significant outlays for such experimentation. The “educational materials’’ market was worth $8.1 billion in revenue in 2009, according to Simba Information, a media market research firm in Stamford, Conn. Pearson, which sells materials for levels from pre-kindergarten through college, is the largest educational publisher in the world, with global education revenues of $5.9 billion in 2009. Houghton Mifflin, which concentrates on the pre-kindergarten through 12th-grade market, had 2009 revenues of $1.7 billion.

Kathy Mickey, an analyst with Simba, said that the iPad has “a wow factor right now that’s attractive to everybody: students, teachers, and publishers.’’

In addition, Mickey said, “The whole concept of apps has changed how educational publishers are looking at how they are using the content they have now.’’

Houghton Mifflin’s yearlong pilot iPad program, launched in September, is an Algebra 1 app for sixth- and seventh-graders. The user interface has interactive screens that alternately challenge and reward the users. The 400 students using the app will be able to receive feedback on practice questions, write and save notes, receive guided instruction, and access video lessons taught by Edward Burger, a Williams College mathematics professor.

A control group of students is using Houghton Mifflin’s traditional Algebra 1 textbook. A third-party research organization will compare the two groups in the areas of student achievement and attitudes about learning.

“It allows users to go from being passive receivers of information to active learners,’’ Forsa said.

She touched the iPad’s screen, and an animated series of steps unfurled. “What I really like about it is how it will show you the steps in solving an equation, one step at a time,’’ she said.

Forsa said her company is “measuring every single activity’’ on the iPads that the students in their pilot program are using, to determine whether the platform inspires “a higher level of engagement, a higher level of interactivity.’’

Pearson’s Virginia iPad program includes electronic texts and iPad apps for seventh-grade US history and ninth-grade world history, part of a commitment by Virginia and Henry County to explore the iPad as an educational device.

“From what I’ve seen, the iPad is going to be a transformational platform for textbooks,’’ said Anthony Jackson, superintendent of the Henry County Public Schools.

Jackson said that the school system was so impressed when the first iPads arrived last summer that it used federal stimulus funds to expand the initial Pearson pilot program from 20 devices to 1,700. Now every fourth- and fifth-grade student in the county has an iPad.

Both publishers — Pearson and Houghton Mifflin — have already discovered that the iPad has shortcomings as an educational device. iPads are expensive ($499 retail for the least expensive unit); they are fragile, with glass screens; and Apple doesn’t support Adobe’s multimedia Flash product, a format that many educational publishers have been using for years.

But with a dozen competing tablets recently launched, or about to launch, the publishers are keeping their options open.

In 2010, for example, Houghton Mifflin launched “HMH Fuse,’’ a much larger initiative that encompasses a wider variety of mobile devices and interactive platforms. Pearson Education has already converted 3,000 of its textbooks to a proprietary e-book format, and has more than a hundred iPhone apps in the Apple Store, which it promotes as free, or inexpensive, supplements to its textbooks.

“Our interest is smarter books that keep kids engaged,’’ said Peter Cohen, Pearson’s chief executive for curriculum. “Is learning different, better, on the iPad? That’s what we’re looking at. If it’s not the right form factor, we’ll keep looking.’’

Houghton Mifflin’s Forsa said she’s trying to keep an open mind until June, when she expects to get the independent evaluation of the California trial.

“We are in the student outcome business,’’ Forsa said. “There are a lot of other mobile options, but if the iPad suddenly emerges as an educational device, we’ll use it.’’

What about for the ground-level experience? Allen, the teacher at the Rich Acres Elementary School, said using the iPads has been an adjustment. There was an early period, she said, when the students “experimented a little too much with the iPad’s zoom feature,’’ expanding pictures to comical proportions. “But that has settled down,’’ she added.

“Now, when I try to think of all the nation’s schools using these kinds of devices, it makes sense,’’ Allen said. “This is something that clearly we’re all moving towards.’’