Wireless TV to be big story at Vegas show 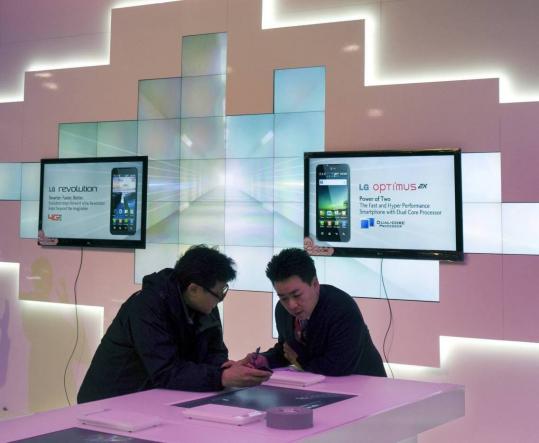 LAS VEGAS — Television began as a wireless technology that snatched pictures and sound out of thin air. Cable TV and the Internet changed that, but new technology is bringing back its wireless ways, judging by products being showcased here at the Consumer Electronics Show, or CES. At the mammoth technology trade show, which opens today, tech product makers are demonstrating ways to beam digital entertainment into our TV sets without the use of wires.

In early previews yesterday, Intel Corp. showed off its new generation of personal computer processor chips, code-named “Sandy Bridge.’’ Among their advanced features is Wireless Display, or WiDi, which allows a home computer to beam high-definition video directly to any compatible TV.

WiDi actually made its debut as a soft ware program in Intel-powered laptops last year, but the technology only supported lower-grade HD video, the standard known as 720p. The Sandy Bridge chip features a powerful new graphics processor, which allows WiDi to transmit video at the higher 1080p standard.

To enable TV sets to pick up the WiDi signal, wireless device maker Netgear Inc. unveiled its new Push2TV, a $120 device that can receive video from a WiDi laptop and feed it to HDTV sets. “You can now play a Blu-ray and stream it directly to the TV,’’ said Samshubhra Choudhury, Netgear’s director of product marketing.

Choudhury said that WiDi-equipped laptops will provide a superior viewing experience compared to other methods of displaying Internet content on TV sets. For example, Google Inc.’s highly touted Google TV device cannot show Internet videos from the four major broadcast TV networks, but the same videos can be viewed on a WiDi laptop, then beamed to the TV set.

Intel worked with several major film studios to build security features into the chip to make it harder to create illicit copies of popular films streamed over the Internet. Kevin Tsujihara, president of Warner Bros. Home Entertainment Group, said that his company will now stream high-definition versions of its latest movies through his company’s website, for viewing only on computers using Intel’s new processor.

Meanwhile, a number of home electronics companies are clashing over a pair of rival technologies that could clear up a lot of cable clutter. WirelessHD and the Wireless Home Digital Interface are two different technical standards that aim to eliminate the common HDMI cable used to connect high-definition TVs, home audio gear, set-top boxes, game consoles, and Blu-ray players. Despite technical differences between the two standards, they are both designed to allow wireless HDMI connections between multiple devices. For example, a single Blu-ray player could transmit its video wirelessly to any TV set in the house.

CES is expected to draw 120,000 attendees from all over the world, according to a show release. Some 2,500 exhibitors are taking part.