Novell agrees to $2.2b sale

Novell Inc., the business software firm based in Waltham, said yesterday that it is going to be acquired by Attachmate Corp. for $2.2 billion, including $450 million from a group that includes computer giant Microsoft Corp. The group will get some of Novell’s intellectual property in return for its investment.

Novell, one of the world’s leading software firms in the 1980s, began soliciting offers after it rebuffed an acquisition proposed in March by equity firm Elliott Associates LP. At the time, Novell said the $2 billion offer price was too low.

Attachmate, also a business software maker, is based in Seattle and owned by a number of private-equity firms. Novell would become a standalone unit in a portfolio that includes products produced under the Attachmate name and the brand NetIQ.

The purchase price values Novell’s stock at 9.1 percent more than its closing price on Friday. As part of the deal, Elliott will become a shareholder in Attachmate.

“It looks like a good deal for both parties,’’ said Jon Oltsik, principal analyst at the Enterprise Strategy Group in Milford. “Novell has a large user base, and this deal gives Attachmate access to those users and Novell’s better-performing products.’’

Novell was founded in Utah and still has major operations there. It rose to prominence in the era of mainframe computers by developing NetWare, a program for linking corporate desktop computers in powerful networks. But Novell faded as Microsoft Corp. added networking services to its Windows operating system.

Today, Novell is the second-largest vendor of software for the Linux open source operating system, trailing only Red Hat Inc. of Raleigh, N.C.

Attachmate, founded in the early 1980s, is a software company whose products include terminal emulation programs that allow clients like banks and government agencies to access programs left over from early computer systems. The company says it has more than 65,000 customers.

The purchase comes after eight months of negotiations with a variety of potential buyers who expressed interest in Novell.

Al Gillen, an analyst at IDC, a technology research firm based in Framingham, said the purchase price — only 10 percent higher than the original offer from Elliott in March — demonstrates that the sale was not an easy one to pull off.

“Some of Novell’s older businesses are still generating cash, but they are not hugely profitable,’’ Gillen said. “Novell also has some new products that are desirable, but the challenge for Attachmate will be to go back to their customers and sell them Novell’s newest products.’’

Novell chief executive Ronald Hovsepian said in an interview yesterday that “there were a bunch of considerations that we took into account, but our number one responsibility was to maximize the price for our shareholders.’’

Hovsepian said that the Microsoft-led group bought 892 Novell patents for its $450 million, but he declined to characterize the nature of those patents.

In regulatory filings, Attachmate said that it expects the sale to be completed early next year.

Jeff Hawn, the chief executive of Attachmate, said through a spokesperson that Novell will remain a separate business unit, and that no personnel decisions, including layoffs or relocations, will be made until the deal is final.

Hawn did add in a statement, however, that “because both companies are mature organizations, there will be some natural overlap in functions.’’ 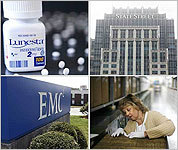 Graphic Novell Inc.
and Attachmate Corp.
Your comment is subject to the rules of our Posting Policy
This comment may appear on your public profile. Public Profile FAQ