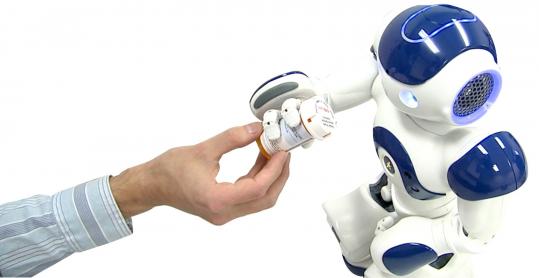 Assistive tech
I’ve never met anyone who wants to end his days in a nursing home.

But for baby boomers as well as the rest of us, the option of “aging in place’’ — spending our twilight years at home, in the places we love — will take more help than we can expect from the meager supply of human caregivers who will be available.

Rather, aging in place will take robots.

And we will need robots that can not only help us manage the stairs, but take care of our health, at least to some extent.

Two college professors have already given one robot the ability to handle a crabby patient with compassion.

Faced with a patient who refuses to take his medication, the robot can balance the risks of missing a dose with its respect for the patient’s autonomy.

If the risk of what doctors and pharmaceutical companies call noncompliance is low (let’s say the drug is a painkiller), the robot with a fistful of pills will back off.

But if you’re likely to keel over without your meds, the robot might insist that you take them, or report your resistance to a human overseer.

For their experiment, the Andersons used a small humanoid robot from Paris-based Aldebaran Robotics (www.aldebaran-robotics.com).

Aldebaran, whose robot, Nao, walks on tabletops and can grasp objects, such as pill bottles, opened an office in Cambridge this month.

Teaching robots to be kind to humans might lead to universal ethical standards for both machines and humans, Susan Anderson suggested.

“People tend to rationalize ethical principals to maximize their own self-interest,’’ Anderson said. “By pursuing machine ethics, we have an opportunity to think about how we’d like a robot to treat us.

Say, is your iPad sitting on your desk right now, looking pretty, and doing little else? (It is horrible to type on, isn’t it?)

Why not mount that tablet inside a metallic frame and turn it into a money-making touch-screen kiosk?

That is the latest pitch Gravity Switch, of Northampton, is making for its iPad frame, the iBracket (www.gravityswitch.com/ibracket).

The company says marketing people are already using the iBracket to sell their products at trade shows, conventions, and other venues — though I have not yet seen any installed.

Gravity Switch’s website does feature the story of an artist whose work is being highlighted on an iPad in one of the frames.

The iBracket comes with a bit of hardware to help with installation, horizontally or vertically, in a box or on a wall.

Wood and plastic versions of the iBracket are in the works.

Prices for the device start at $349 for a version with no speakers. You can also buy versions of the iBracket with two or four speakers for a bit more.