A game they couldn’t win

Viacom to sell off Harmonix as Rock Band sales slip 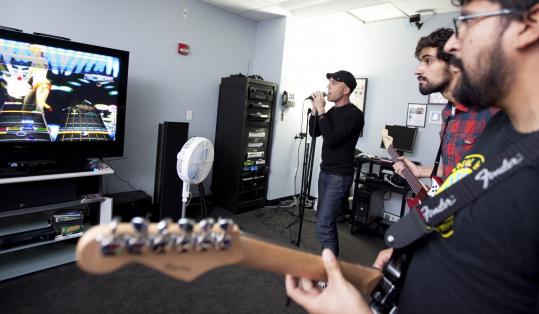 Media giant Viacom Inc. revealed yesterday that it plans to sell Harmonix Music Systems Inc., a major reversal of fortune for the Cambridge maker of the Rock Band line of video games. The move comes four years after Viacom spent $175 million to acquire Harmonix, one of the Boston area’s most prominent video game developers.

Harmonix, which has been losing money, has been a drag on its parent company’s earnings for the past several quarters. Even last year’s moderately successful launch of The Beatles: Rock Band, featuring the legendary British quartet, failed to revive the franchise.

During a conference call with investors yesterday, Viacom chief executive Philippe Dauman said, “The console games business requires an expertise and scale that we don’t have.’’

Sales of Rock Band and other music-based video games have declined dramatically in recent years. Consumers with older versions of Rock Band or Activision Blizzard Inc.’s rival Guitar Hero might pay a dollar or two for new songs to play in the games. But fewer of them would pay $50 or more for each new edition of game software, or for the imitation instruments needed to play the games.

Wedbush Securities in Los Angeles estimates the market for music games, which reached $1.7 billion in 2008, fell to $875 million last year, and may not even reach $500 million this year.

The move comes at the start of the holiday shopping season, when video game sales are at their height. Harmonix’s two newest games, Rock Band 3 and Dance Central, have just gone on sale, and each features major innovations. Rock Band 3 is the first in the series to allow the use of real musical instruments. Dance Central is one of the first video games designed for Microsoft Corp.’s new Kinect, a hands-free game controller.

Michael Pachter, a game industry analyst for Wedbush Securities, expects Dance Central to generate $200 million in sales, which would make it a hit. Asked why Viacom would choose this moment to sell, Pachter replied that perhaps “they want to sell while Harmonix is hot and in the news.’’

Pachter said there’s a good chance that Activision Blizzard will consider making an offer for Harmonix. Activision Blizzard, based in Santa Monica, Calif., is best known for its hugely successful World of Warcraft and Call of Duty games. But Activision also sells the Guitar Hero music game series, which was originally developed by Harmonix, and is Rock Band’s chief competitor.

“I think Activision will come in there and make a bid,’’ said Pachter, adding it would allow the company to eliminate its only major rival. It would also give Activision a new team of skilled music game designers.

Activision did not respond to a request for comment. Neither did Electronic Arts Inc., which distributes the Rock Band games.

Viacom has reclassified Harmonix as a discontinued operation, revealing that the game maker had become a significant financial burden on its parent company, which has otherwise performed well despite the economic slump. Harmonix knocked $321 million from Viacom’s net income for the nine months ended Sept. 30, cutting it from $1.17 billion to $854 million, and reducing earnings per share for the period from $1.92 to $1.40.

The current woes of Harmonix are a far cry from the company’s successes a few years ago. In 2007, Viacom was so pleased with sales of the first Rock Band game that it paid $150 million in bonuses to some of the company’s original investors, including cofounders Alex Rigopulos and Eran Egozy. Viacom promised a similar bonus if future versions of the game were also hits.

Instead, the music game market cooled off. Last year’s The Beatles: Rock Band game, despite glowing reviews from critics, achieved only moderate success, selling about 1.1 million units in the United States by year’s end. By contrast, Activision’s Modern Warfare 2 sold 8 million units in the same period.

In an October interview with gaming website Edge, Rigopulos said The Beatles game sold “over a couple of million units,’’ but acknowledged it did not do as well as other titles in the series.