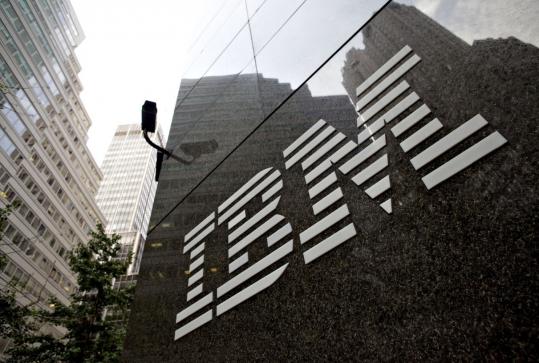 With four acquisitions of local companies in the past three months, and the launch of a major software lab here, IBM Corp. has found a lot to like in Massachusetts. And there’s a good chance that the giant computer firm isn’t ready to put away its checkbook.

“We are an acquisition-friendly company,’’ said Mike Loria, IBM’s vice president of business development. “We are constantly looking.’’

Although IBM searches the entire world for new acquisitions, Massachusetts is a prime hunting ground, thanks to its excellent universities and array of small but sophisticated tech companies. “There’s a lot of incubation that takes place in Massachusetts,’’ said Loria, who’s based in Westford at IBM’s new Mass Lab, the company’s largest software operation in North America.

Loria is a veteran of Rational Software, a maker of software de velopment tools that IBM acquired in 2003 for $2.1 billion. It was the first major Massachusetts acquisition overseen by Sam Palmisano, IBM’s then-new chief executive, who vowed to expand the company through multiple acquisitions.

IBM’s most recent local deal was last week’s $1.7 billion purchase of Netezza Corp. of Marlborough, which makes computers and software for analyzing the vast amounts of information stored in the databases of big companies. Loria linked the deal to IBM’s “Smarter Planet’’ initiative to help businesses and governments use digital data to enable better decisions.

“Now that you can gather absolute real-time data, do analysis and modeling, you can do a lot more informed analysis than you previously could,’’ he said.

Meanwhile, IBM has bought a host of local vendors of security, storage, and data analysis products, from Ascential Software Corp. of Westborough, for about $1.1 billion in 2005, to Unica Corp. of Waltham, for about $480 million in 2010.

“They’ve been buying companies that are smaller — that have interesting technology — and using their global scale to distribute that product,’’ said Sunit Gogia, an industry analyst with Morningstar Inc. in Chicago.

More Massachusetts acquisitions are likely, said Peter Falvey, the Boston-based managing director of investment bank Morgan Keegan Technology Group. IBM is now so big, he said, it has to continue buying aggressively to maintain its growth rate, “and we know that they like tapping into our intellectual capital.’’

Falvey said that when he discussed possible Massachusetts IBM acquisition targets with his colleagues, one of the names that came up was Endeca Technologies Inc. in Cambridge, a provider of search and business intelligence software, “which is in the same general area as Netezza.’’

Progress Software Corp. in Bedford, which makes products that optimize enterprise software, and Marathon Technologies Corp. in Littleton, which makes software that improves application availability, are also possibilities, Falvey said, because they fit with the kind of software that IBM has been selling to its corporate customers.

“Further out,’’ Falvey added, “there’s EMC Corp., primarily because very few other companies are big enough to buy them.’’ But, he added, the Hopkinton-based data storage giant is “a long shot’’ as an IBM acquisition, partly because the company is so big.

Most acquisitions that IBM does make are entirely absorbed into the corporate behemoth. “If the strategy was to fill a gap in the portfolio,’’ said Loria, “to get the synergies, you really want to integrate it quickly.’’ But a few, such as Rational or Lotus, which IBM acquired in 1995, had already built up a large stable of customers, and so were preserved as distinct business units.

IBM buys companies so frequently, the pace can overtake software engineers who leave IBM. Donna McManus left IBM’s Lotus unit in 1997 to work at a smaller company, Rational Software. Six years later, she found herself back at IBM, when the company swallowed up Rational.

“If you’re working in an area that fits with IBM, it can be a small world,’’ McManus said. “Even if you prefer working at a small firm, you may end up working for IBM.’’

Another reason IBM and other tech companies are shopping, Kay said, is that they “have tens of billions in their war chest right now,’’ he said. IBM alone has $12 billion in cash and short-term investments on its books.

Kay said that many Massachusetts firms could conceivably appeal to IBM. He offered as an example Sanbolic Inc., a Watertown maker of software to enable storage for physical, virtual, and cloud data centers. Those kinds of capabilities could reinforce IBM’s ability to compete with EMC Corp.

Momchil V. Michailov, chief executive of Sanbolic, said his company product line “makes us a likely target.’’ None of the other companies mentioned as possible IBM acquisitions returned calls for comment.

Which local company will be snapped up next? IBM’s Loria declines to offer even a hint. “The answer to that question would buy me a long time off from work,’’ he said.