It hopes to begin service next year for FIOS clients 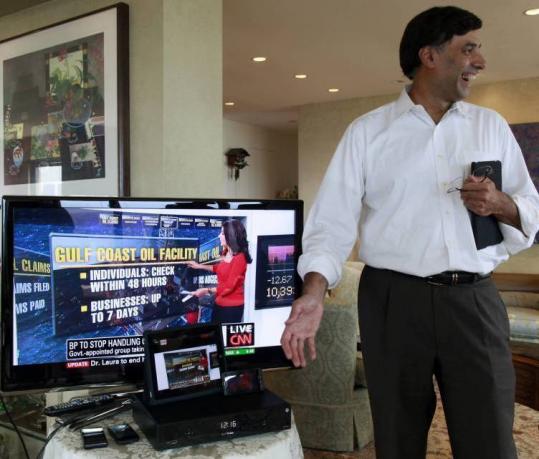 NEW YORK — Think you need another TV in the home? Maybe the iPad, Apple Inc.’s tablet computer, will do the job instead.

In the latest example of the slim device attracting the attention of the TV industry, Verizon Communications Inc. yesterday demonstrated an application that turns the iPad into another screen for its cable TV service.

If the application sees the light of day next year, as planned, subscribers of Verizon’s FiOS TV service could walk around the house with their iPads and watch live TV. They would be able to channel-surf right on the touch screen, with no need for a remote.

Verizon is not alone in looking at sending cable TV signals to non-TV devices. Cablevision Systems Corp., which competes with Verizon in the New York City area, has talked about a similar iPad app, but has not said when it would be available.

Hulu.com, which aggregates shows from ABC, Fox, and NBC, is already available as an iPad application. But it doesn’t show live TV, so there’s no sports or news. Comcast Corp. offers TV shows online for viewing on computers.

That service is only for cable subscribers, unlike Hulu. Verizon’s and Cablevision’s services would be available only to subscribers, as well.

The big obstacle to taking TV signals further is that the owners of the TV channels have to be convinced it’s a good idea.

“There’s a wide diversity of opinion on how to move the industry forward, so you really have to convince them one by one that this is good for everybody: the consumer, programmer, distributor, and the business,’’ said Shawn Strickland, Verizon’s vice president of consumer strategy and planning.

Verizon does not want to launch the service with just a few channels. It would rather wait until next year if that means it can begin with a full suite of programming, Strickland said. It doesn’t plan to charge extra for iPad viewing.

The company also wants to make the service available on other tablets as they come out, he said.

Initially, the service would allow watching only in the subscriber’s home. But if the rights issue can be worked out, it could be extended outside the home, as well, Strickland said.