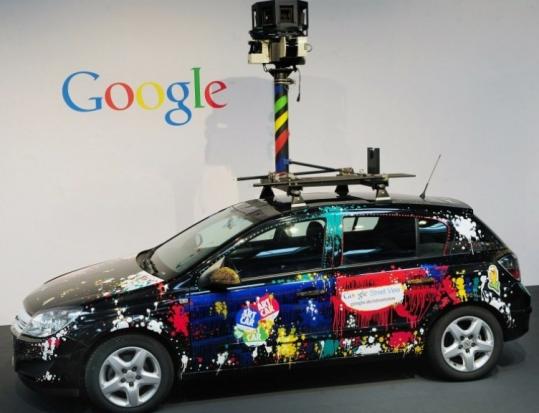 A car equipped with a camera to photograph streets was on exhibit at a high-tech fair in March in Hanover, Germany. (Daniel Mihailescu/AFP/Getty Images/File)
By Choe Sang-hun New York Times / August 11, 2010

SEOUL — South Korean police raided the offices of Google Korea yesterday as part of an investigation into whether the company had illegally collected and stored personal wireless data.

The search company is facing lawsuits and investigations in several countries in connection with private wireless data collected for its Street View service. Street View, which was started in 2006, allows users to view panoramic street scenes on Google Maps and take virtual walks through cities.

From late last year until May, Google Korea dispatched cars topped with cameras to cruise around the country to photograph neighborhoods before the planned introduction of Street View.

The police suspect that those cars might have illegally captured and stored personal data from wireless networks while they were mapping streets, a statement by the Cyber Terror Response Center of the Korean National Police Agency said.

“We will investigate Google Korea officials and scrutinize the data we confiscated’’ to see whether the company violated the country’s laws on communications and privacy, it said.

“We intend to find out what kinds of data they have collected and how much,’’ the response center said. “We will try to retrieve all the original data illegally collected and stored through domestic Wi-Fi networks from the Google headquarters.’’

Google confirmed in an e-mailed statement to Reuters that the South Korean police visited the company’s office in conjunction with the investigation concerning data collection by Street View cars. The company said it would cooperate with the investigation. Google said previously that the collection of personal data in other countries had been unintentional and that the company would cooperate with investigations. The company has faced tough competition in South Korea. One domestic search engine, Daum, runs a popular service akin to Street View.

Google said yesterday that it would introduce Street View in Germany before the end of the year, the Associated Press reported from Berlin.

The feature, Google said, would be available in the 20 largest German cities. According to the company, residents could ask to have photographs of their houses removed from the database starting next week.