Casting some light on 3-D 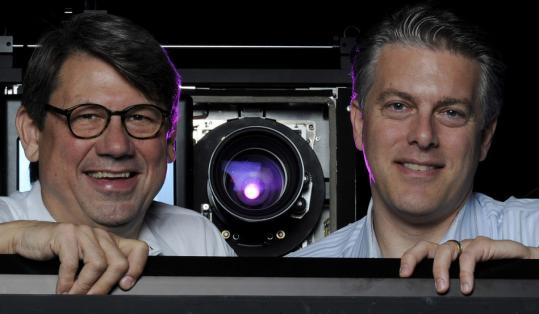 Should you hit the multiplex to see the animated Steve Carell film “Despicable Me,’’ released Friday, in 3-D, the founders of Laser Light Engines Inc. have a prediction: It will look darker than it should on the big screen.

Some critics have complained that “The Last Airbender,’’ another 3-D movie now in theaters, was shot with so much action taking place in the shadows that it looks muddy when seen in 3-D. And Christopher Nolan, director of “The Dark Knight’’ and “Inception,’’ a Leonardo DiCaprio thriller due out next week, recently told a film festival audience that he isn’t a fan of watching films in 3-D: “I find the dimness of the image extremely alienating.’’

Laser Light Engines, a Salem, N.H., start-up, believes it has the solution: using lasers as the projector’s light source, instead of the standard xenon light bulb. And laser-lit projectors would have other benefits, aside from making 3-D movies look more brilliant. Bulb changes would be a thing of the past (a single xenon bulb can cost anywhere from $500 to $1,000, and can require changing five or more times a year in a digital projector), and the projector would consume about half as much power.

But only a few years after digital servers began replacing film reels inside the projection booth, are cinemas ready to embrace another new technology?

Laser Light Engines’ technology traces back to work done under federal grants by another company, Andover-based Physical Sciences Inc. That company showed how an infrared laser, which produces light that’s invisible to the human eye, could be used in combination with crystals that efficiently converted the infrared light into red, green, and blue. A demo in 2003 showed how the laser system could connect to a projector that might be used in hyper-realistic Air Force flight simulators. Laser Light Engines was formed to commercialize the laser technology (Physical Sciences still holds a minority stake in the spinoff).

Laser Light Engines says that not only will its laser light system be able to project 3-D movies at the proper brightness (those polarized glasses you wear, much like sunglasses, absorb lots of light before it reaches your eye), but that the system will last for about a decade, eliminating the need to replace a projector’s pricey light bulb several times a year. Cofounder Bill Beck says the laser system can produce two to five times the brightness of a bulb. Though it would cost about twice as much as a traditional system (which runs about $10,000 purchased new), the company says it would start generating savings within two years.

“It has got to save money,’’ says Beck, “though we’d also love to sell it on the better picture quality and brightness.’’

In May 2008, the company raised $4.5 million in funding, much of it from Braemar Energy Ventures, a firm based in Boston and New York. Then, last fall, the company hired as its chief executive Doug Darrow, a former Texas Instruments Inc. executive. Darrow is considered one of the pioneers of the digital cinema revolution, one of the people who convinced projector makers to incorporate Texas Instruments’ imaging chips into their products, and persuaded filmmakers and studio executives that the consistency of digital projection offered advantages over film.

“With digital cinema, half of theatrical exhibition got modernized,’’ Darrow says. “We replaced film with digital files stored on a server. But digital cinema is still being powered by this inefficient, disposable light source, the xenon bulb.’’

Two weeks ago, I stepped inside the company’s screening room for a demo of the technology; also visiting that day to get a look at the Laser Light Engines technology for the first time was Bob Lambert, who until recently had been a top technology executive at Walt Disney Co. On a 16-foot-wide screen (smaller than what you’d see in a typical theater), the company showed clips from music videos and television ads, a segment from last year’s Michael Douglas drama “Solitary Man,’’ and trailers for 3-D movies like “Avatar’’ and “How to Train Your Dragon.’’

Everything looked good to my untrained eye, with details discernible even in deliberately dark scenes, and Lambert seemed impressed, too. But the company didn’t show any side-by-side, split-screen comparisons with a projector using a standard xenon bulb, which is usually what studio executives and cinema owners want to see. And while Laser Light Engines executives said the demo is about twice as bright as what you’d see at your neighborhood movie theater, the laser still isn’t producing its peak brightness.

Laser Light Engines says it will have about $3 million in revenue this year, mainly from selling prototype laser systems to projector makers that are considering whether to integrate the Laser Light Engines technology into their products.

“If they can make it work, I see it succeeding,’’ says Nick Dager, publisher of Digital Cinema Report, an online publication that tracks the evolution of new technologies for the projection booth. Theater owners, he says, “are in the business to make money, and anything that can save them money on bulbs and electricity, which Laser Light Engines says they can do, would be appealing.’’

But Dager says that aside from getting the technology working, price will present another big challenge. The 80 percent of theaters worldwide that haven’t yet converted their film projectors to digital, Dager says, have been waiting because the cost of the equipment is too high. And while a laser light source may cut a cinema’s operating costs over the course of 10 years, it will add to the initial purchase price.

Ian Judge, the general manager of the five-screen Somerville Theatre in Davis Square, seems open-minded about the potential for a laser-lit projector, though he hasn’t yet seen the company’s demo. “If they could prove to me that it’s just as good as a xenon bulb or better, and would be worth the up-front expense, we’d certainly consider it,’’ he says.

Laser Light Engines’ executives acknowledge that they’ve got more work to do on their system before it’ll be coming to a theater near you, like improving the way it interfaces to a digital projector and fine-tuning the contrast ratio (essentially, how dark it can make black look on the screen.) Others, like Sony Corp. and Ushio Inc. in Japan, are developing their own laser light systems for digital projectors, though Laser Light Engines says it has found the best way to eliminate what is called “laser speckle,’’ a kind of fuzziness or static that’s visible in laser light. Laser Light Engines expects to bring in a second round of venture capital funding this summer.

But even with additional money, getting a product to the market before rivals, and convincing projector makers to trust a technology from a start-up without a track record, will be high hurdles for Laser Light Engines. And Darrow says the company’s product not only has to satisfy the “golden eyes’’ of Hollywood, who want to protect the image quality of the mega million-dollar films they make, but also the fiscally conservative theater owners, who care how much it costs to air condition an auditorium, pop corn, and replace bulbs.

Darrow has perfected his pitch for both constituencies. For studio execs and filmmakers, his slogan is, “The future is bright, but the image is dim.’’ And for cinema-owners, he plans to sell the cost savings: “It’s the light bulb that never burns out.’’

Correction: The original version of this article misstated how many times a year a xenon bulb in a digial projector requires changing.