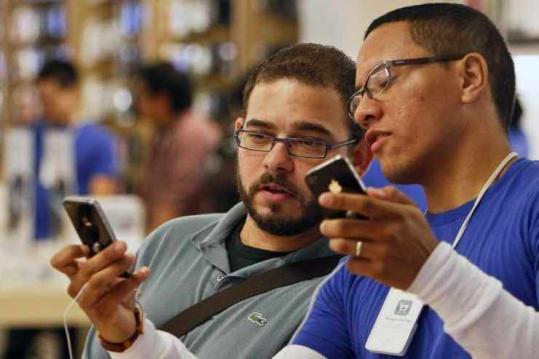 An Apple employee showed a customer some of the features of the iPhone 4 during its launch last week. (Michael Paulsen/Houston Chronicle via Associated Press)
Bloomberg News / June 29, 2010

SAN FRANCISCO — Apple sold 1.7 million iPhone 4s in its first three days, a record for the newest version of its top-selling product featuring video calling and an updated body.

The iPhone 4 made its debut in the United States, Britain, Japan, France, and Germany last Thursday. Many stores sold out. The previous 3GS model sold 1 million during its first weekend.

Chief executive Steve Jobs added new features including a high-definition video camera, a sharper screen, and multitasking that allows the use of several programs at once. Apple is competing against Research In Motion’s BlackBerry and phones made by companies such as HTC that use Google’s Android operating system.

Apple had a difficult time getting enough touchscreens to meet demand for the device, said Ashok Kumar, an analyst at Rodman & Renshaw Inc. in New York, so the early sales figures may not be an accurate reflection of demand. “It’s too early to say if this is negative,’’ said Kumar. While Apple has some production constraints, the company “has a captive audience,’’ he said. “Demand for the iPhone 4 is not yet satiated so it just gets pushed out into subsequent quarters.’’

The iPhone sales results follow Apple’s statement last week that it sold more than 3 million of its iPad tablets in the first 80 days. IPhone sales accounted for 40 percent of revenue last quarter.