Tomb developer taking his walk-through puzzles from Fenway to Foxborough 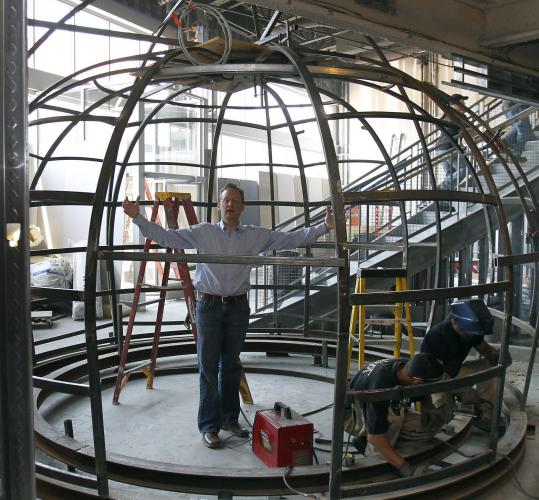 Matthew DuPlessie displayed a diving bell replica featured in a 20,000 Leagues Under the Sea attraction he is building at Patriot Place in Foxborough. (Robert E. Klein for The Boston Globe)
By Robert Preer Globe Correspondent / June 28, 2010

FOXBOROUGH — The developer of Boston’s Indiana Jones-themed Tomb, in the Fenway area, is taking his mini-amusement park concept to the suburbs.

Matthew DuPlessie, a graduate of Harvard Business School and MIT’s School of Engineering, plans to open the interactive Espionage and 20,000 Leagues Under the Sea attractions next to CBS Scene at Patriot Place in Foxborough this summer.

The attractions, developed by DuPlessie’s 5 Wits Productions Inc., will combine elements of Disney-style theme parks with theater and video games. Unlike a typical Disney ride — in which visitors are strapped in, exposed to exciting scenes, and maybe sprayed with water in the process — the 5 Wits attractions are walk-through. Visitors work in groups to solve puzzles and overcome challenges, ranging from stepping over laser beams to defusing a make-believe bomb to freeing a submarine from the clutches of a giant squid.

“It’s designed to feel like you are inside a video game,’’ DuPlessie said. “The show is very aware of your presence. Your performance matters.’’

DuPlessie, 33, is an Attleboro native who designed attractions for Universal Studios and Walt Disney Co. after graduating from the Massachusetts Institute of Technology. He later went to Harvard Business School, where he developed the idea for Tomb as a class project.

Tomb opened in 2004 in a Brookline Avenue storefront across from the Landmark Center shopping center. Designed as a temporary attraction, it has proved to have staying power, drawing about 60,000 visitors annually, many of them students on school field trips. Tomb also attracts corporate groups and tourists.

DuPlessie said he plans to close Tomb in the fall and will reopen it later in a larger space. Tomb has only four rooms, while each of the Patriot Place attractions will have eight.

Espionage and 20,000 Leagues will be housed in a 13,000-square-foot space overlooking Gillette Stadium at Patriot Place’s north shopping center. Both attractions are under construction. Espionage is scheduled to open in early July, with 20,000 Leagues opening several weeks later.

The Kraft Group’s 1.3 million-square-foot Patriot Place includes two shopping centers: a collection of big-box stores to the south and an open-air lifestyle center mall to the north. Although the south center, anchored by Bass Pro Shops, has been bustling since its first stores opened in late 2007, the north center has struggled. It opened in fall 2008, when the global financial crisis hit.

Empty spaces dot the north center, which has more than a dozen restaurants, as well as a 14-screen movie theater, a Showcase Live concert venue, and the Hall at Patriot Place hall of fame for the . Some of the empty storefronts should light up this summer with the scheduled openings of Olympia Sports and country music star Toby Keith’s I Love This Bar and Grill.

Patriot Place general manager Brian Earley said the 5 Wits attractions will boost the mall. “It’s going to draw a lot of traffic here, from school groups to tourists,’’ he said.

Entertainment is becoming an increasingly important source of revenue for US malls, which have been battling the recession and competition from online retailers. “It expands a center’s reach,’’ said Malachy Cavanagh, spokesman for the International Council of Shopping Centers. “It’s something you can’t get shopping at home on the Web or with a catalogue or the television.’’

5 Wits Productions, based in Saugus, has designed exhibits and attractions for other venues and performance groups, including the Boston Museum of Science, Blue Man Group, and the International Spy Museum in Washington, D.C.

Although the company’s attractions do not incorporate breakthrough or proprietary technologies, their use of technology and theater, as well as the business model, is unusual. Most attractions that resemble those of 5 Wits are part of huge theme parks and are not interactive.

“There really isn’t anything like it in the United States,’’ said 5 Wits general manager Lucas Neilly.

A tour of Espionage or 20,000 Leagues will take about an hour. Visitors will be divided into groups of up to 15, led by a guide, typically a college student with some theater experience or training. The groups move from room to room, solving puzzles. Since the rooms are closed off and soundproof, multiple groups can move through the attractions simultaneously.

Through the use of sophisticated audio and video techniques, as well as rotating rooms and optical illusions, visitors in Foxborough will enter the worlds of international espionage and a science fiction submarine out of Jules Verne. Visitors must overcome power outages, booby-trapped rooms, burst pipes, and ticking time bombs.

The attractions are highly automated, with computers determining the difficulty of puzzles groups must solve before moving to the next challenge. If a group is struggling with a challenge — and holding up another group — the computer can automatically make the task easier so the groups can advance.

Ticket prices in Foxborough will be about $18 for adults and $14 for children, with discounts for groups, according to DuPlessie. Discounts also will be offered to visitors who buy tickets to both attractions.

The attractions have been designed to include elements of the Massachusetts Department of Education public school curriculum, DuPlessie said. Although they provide lessons in Egyptian history (Tomb) and Cold War events (Espionage), the main educational benefit is group problem-solving, he said.