L.A. glitz, with a Boston accent 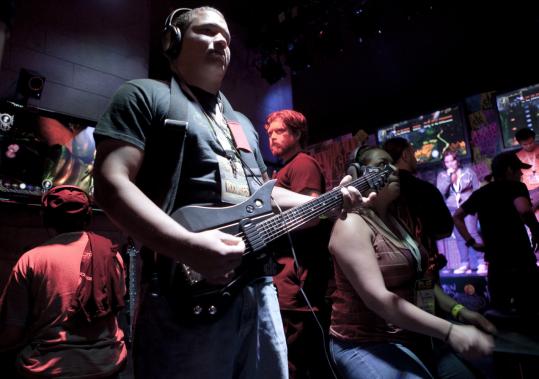 LOS ANGELES — Amid the bright lights, deafening roar, and intricately designed booths of this year’s Electronic Entertainment Expo, the annual video game industry convention, there was something distinctly Boston.

Several of the new products that drew game industry developers, executives, and analysts to the Los Angeles Convention Center were developed in Massachusetts. Harmonix Music Systems,Inc. of Cambridge showcased two new music games, and Turbine Inc. of Westwood its online multiplayer games. Quick Hit Inc. of Foxborough offered its football game, now featuring more authentic NFL action thanks to a new licensing agreement with the league. And Boston developer Seven45 Studios made its play in the music game genre with its upcoming release, Power Gig: Rise of the SixString.

Turbine, recently acquired by Warner Bros., is converting its hit Web-based, multiplayer role-playing game The Lord of the Rings Online from a subscription model to one that is free to play.

“Giving players a choice on how they pay for the game is the future of online games,’’ said Adam Mersky, director of communications for Turbine, during a demo of the game at E3.

Instead of buying a boxed copy of the game and paying a monthly fee to play, players can participate at no charge, but pay for additional features designed to enhance the experience.

“It’s a business model that’s been very strong in Asia, but it’s not something many publishers have been willing to try in the States,’’ said Talmadge Blevins, vice president of the game review website IGN.com. “With microtransactions, game publishers can actually make more money per user on average than with a monthly subscription, as power users are willing to spend potentially hundreds of dollars per month.’’

Last week, Quick Hit revealed it had secured the rights to use NFL trademarks, including team names and logos, giving a boost to its free online football game, a beta version of which is available at www.quickhit.com.

For 2010, Cambridge developer Harmonix is introducing a completely redesigned Rock Band and a dancing game based on Microsoft Corp.’s Kinect, a motion-capture system coming in the fall for the Xbox 360 console. Dance Central will be one of the first games made for the new technology.

The Kinect device sees and interprets moves made by players. The dance game is controlled by hand and body motions — no handheld controllers, no buttons, and no plastic floor mat to register a player’s steps. The Kinect’s camera picks up player motions and signals on the screen errors, and rewards the right moves.

“We could not have made this game until this technology was available,’’ said Tracy Rosenthal-Newsom, vice president for production at Harmonix.

“We started development on Rock Band 3 understanding that this was going to be a project that forged new ground,’’ said Daniel Sussman, the game’s project director.

“Since the first Guitar Hero came out years ago, naysayers have been asking, ‘Why don’t you just learn how to play a real guitar instead of playing this guitar game?’ Well, now you can,’’ said IGN.com&#8217;s Blevins. He warned that the cost of the guitar controller is expected to be high, which could hurt sales.

Also competing in the music game sector is Seven45 Studios, which revealed its new Power Gig: Rise of the SixString, a challenging music game that also features guitar controllers with real strings.

The game received a thumbs-up from Sig Hansen, star of the show. “I think the game is pretty cool,’’ Hansen said at E3. “Me and the other captains got to participate and help build it, which is always nice.’’

Former pitcher Curt Schilling and staffers from his startup game company 38 Studios LLC in Maynard, which is developing an online role-playing game, attended the conference, but were not exhibiting. The company has not released any details about its highly anticipated first game.

John M. Guilfoil can be reached at jguilfoil@globe.com