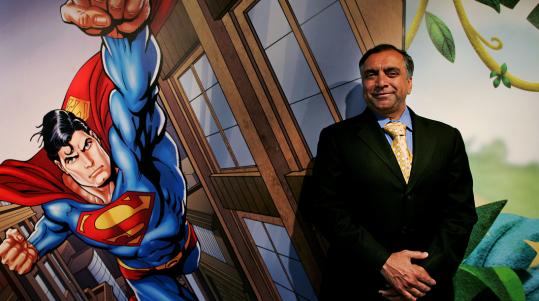 SAN DIEGO — Vyomesh I. Joshi, the head of Hewlett-Packard’s $24 billion printing empire, relaxes by taking long walks on the beaches near his home. And, for a while, it seemed as if he might end up spending more time strolling the sand than moving ink and toner.

Today, he will preside over an event announcing HP’s latest attack on the printing market, which will center on printers built for the iPhone age.

Joshi has spent years disputing the notion that people will print less as they do more on their hand-held devices. This week, he will see his ideas put into action as HP rolls out a fleet of printers with Web access, their own e-mail addresses, and touchscreens.

The new printers will range in price from $99 to about $400. Every one will come with what HP executives bill as a breakthrough feature — its very own e-mail address.

HP’s engineers hit on the e-mail address as an easy, familiar way for people to send print jobs to the Web-ready printers. You can, for example, take a photo with a phone, e-mail it to your printer’s address, and have the print-out waiting for you at home. Or, you can share the printer’s e-mail address with family and friends.

HP plans to offer a few of these new printers to consumers this month, and then a few more of the products to small businesses in September. It expects to sell more than 15 million of the Web printers by next year.

The hardest part may be convincing consumers to change their behavior and adopt the new tools. People who once printed out directions now have navigational devices, and things like boarding passes and tickets are starting to give way to their digital equivalents on smartphones.

HP also expects to have about 7,000 printing kiosks in retail stores by year’s end, pumping out photos, books, and brochures. HP has built out its business for managing the printing operations of companies and now has $6 billion worth of contracts.

Joshi, who many people thought would one day inherit the chief executive’s job, said he opted to ignore the speculation about his future at HP.

“In October, I will have completed 30 years here,’’ Joshi said. “I love this company, and my view is that printing is still a very significant part of HP.’’