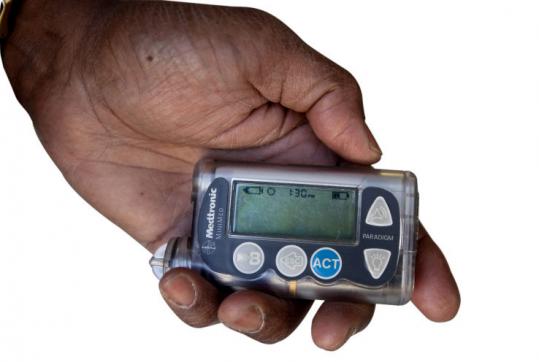 By Elizabeth Cooney Globe Correspondent / May 3, 2010

In 1965, doctors told Edmoth Matthews’s mother that by the time her 3-year-old son turned 18, there would be a cure for type 1 diabetes.

Now 48 and a Marlborough firefighter, Matthews is still waiting. But he has high hopes for a device being developed by Boston researchers that mimics the healthy human pancreas. Matthews participated in a study of a prototype of the device, and while it’s not a cure, it kept his blood sugar in check without the guesswork of current treatments.

For people with type 1 diabetes, keeping the condition under control is a constant process of testing blood sugar levels and adjusting how much insulin they need, based on what they eat and how active they are.

Because their pancreases no longer produce insulin, which ferries blood sugar into cells, people with type 1 diabetes must inject the hormone several times a day or wear a pump that infuses preset amounts into their bodies.

If blood sugar falls too low, they risk falling into a coma. If blood sugar levels stay too high, they can suffer long-term complications that result in kidney damage, heart disease, amputations, and blindness.

“It’s a triangle of food, exercise, and insulin,’’ Matthews said. “It’s a constant battle to be calculating what’s going on.’’

The “artificial pancreas’’ Matthews used is one of several devices in development that marry a glucose sensor with a computer-guided insulin pump. It automatically monitors blood sugar levels and, when needed, delivers insulin to lower blood sugar. In an advance over some other systems, it can also inject another hormone, glucagon, to raise blood sugar as needed. People with type 1 diabetes make glucagon but do not secrete it properly in response to low blood sugar.

If further testing shows the system works, it could take up to five years to reach the market, said Dr. Steven Russell, a Massachusetts General Hospital endocrinologist who is part of the development team. His coleader, Edward Damiano of Boston University, estimated the system will cost up to $7,000 for the glucose monitor and pump, plus another $100 a week for insulin, glucagon, and sensors that must be replaced every few days.

A bioengineer specializing in the mechanics of blood flow, Damiano expanded his research to develop an artificial pancreas after his son was diagnosed with type 1 diabetes at 11 months old. Damiano checks his now-11-year-old son’s blood sugar every two hours throughout the night.

In two preliminary experiments reported last month in Science Translational Medicine, 11 adults, including Matthews, spent 27 hours in hospital beds tethered to intravenous lines that drew their blood and tested their sugar levels every five minutes. The reading was fed into a laptop computer, which used software developed by BU research scientist Firas El-Khatib, Damiano’s former student, to decide when to deliver insulin or glucagon just beneath the skin using commercially available pumps.

The subjects averaged blood sugar levels within the target range for good control, although in the first experiment five of them occasionally had levels sink low enough that they needed to drink orange juice to bring them back up. After the researchers determined the patients were absorbing insulin at widely different rates, they adjusted the computer algorithm and succeeded in keeping blood sugar levels where they should be, without dips into hypoglycemia.

The researchers eventually hope to replace the laptop with a computer chip that would reside in a dual insulin-glucagon pump. Together with a glucose monitor that measures blood sugar levels every five minutes through a sensor inserted beneath the skin, the system would approximate what the healthy pancreas does minute by minute.

The work is funded by the Juvenile Diabetes Research Foundation and the National Institute of Diabetes and Digestive and Kidney Diseases.

Diabetes specialists called the study an important step forward, but said there are challenges.

Dr. Howard Wolpert of the Joslin Diabetes Center in Boston said continuous glucose monitoring systems aren’t as accurate as one would hope because they measure sugar in the fluid between cells, not in the bloodstream. That means there’s a delay in sensing glucose levels, just as there is a lag when insulin is injected or infused beneath the skin rather than released into the bloodstream, as a healthy pancreas would do. “The system can’t turn on and off rapidly enough to respond to changes in the glucose level,’’ he said.

“The new system’s advance is that it can respond by infusing glucagon to overcome low blood sugars,’’ he said, but it doesn’t control doses of insulin or glucagon finely enough. “Imagine driving a car where the accelerator was all the way down or not. You could control the speed of the car by taking your foot completely off it or flooring it and then putting your foot on the brake. . . . It works, but it’s not ideal.’’

NIDDK considers artificial pancreas systems a research priority, said Dr. Guillermo Arreaza-Rubín, director of the institute’s Glucose Sensing and Insulin Delivery Technologies Program. “They are not a cure but they may represent what some patients would call a cure. If my glucose is well controlled without fear of hypoglycemia, if my chances of developing kidney failure, blindness, or other chronic complications [decline], it may really make a great difference in terms of quality of life.’’

Damiano has a deadline.

“I have this little ticking clock that goes off in seven years when my son goes off to college,’’ he said. “I firmly believe that we are building . . . a system that will regulate people’s blood sugar exquisitely well. It will nearly normalize their blood sugar to the point where they won’t have to fear going to bed at night and not waking up.’’

How the artificial pancreas works