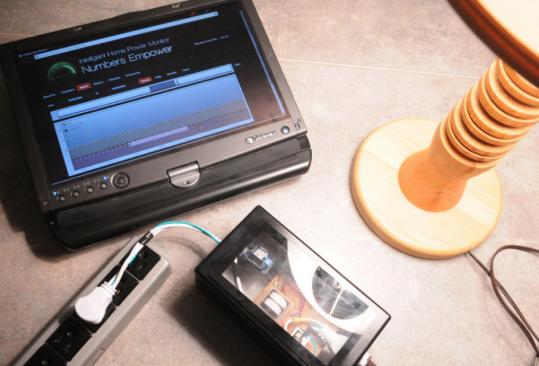 Text size – +
Prototypes
The next meter your utility company installs will be a smart one, the industry tells us.

(It’s all part of the government’s smart-grid plans, and a potentially a new threat to consumers’ privacy.)

Your smart meter may have the ability able to tell you how much juice your dishwasher is using or how efficient your fridge is.

But another system, developed by engineering students at Northeastern University, can do a better job of helping you trim your energy bill.

It also lets you shut those devices off from any location, using your mobile phone or PC.

Unlike with your smart meter, you do not need the utility company’s help to install the Numbers Empower system.

You plug the appliances into the sensors, and the sensors into your home’s wall sockets.

The sensors then relay each appliance’s electricity consumption to an Internet-connected router, via Zigbee, the RF standard crafted for appliances and other devices around the home.

You can then view a graphical and numerical chart that shows how much that Vornado air purifier is costing.

Better yet, you can shut off the energy hogs in your home remotely — for example, if you forgot to shut off your home entertainment system — via the system’s Web interface.

Numbers Empower, which was built with support from National Grid, also produces customized reports, so you can get a broader picture of your energy use.

In our wireless Internet age, the wallet can seem like something of a throwback, stuffed as it is with paper receipts and cash, along with our customer loyalty and credit cards.

But the makers of the TungstenW, a pocket-size safe with a fingerprint reader on its shell, want you to know that many cases of identity theft start with stolen wallets.

The TungstenW looks like a wallet on the inside: It has slots for cards and a pocket for change and a few keys.

But the TungstenW is harder to lose, once you pair it with your mobile phone, via Bluetooth.

If it becomes separated by more than 10 feet from the phone, it sounds an alarm (which is great, providing you don’t typically keep your wallet and phone in the same place).

Even if you lose the TungstenW, most thieves, and kids and spouses scrounging for cash, will have a hard time foiling the TungstenW fingerprint reader or cracking its hard outer shell.

You will have an incentive for keeping the TungstenW close: It costs more than you probably have in your wallet at the moment.

One version of the TungstenW, which has a carbon fiber and a Kevlar shell, costs $600. Another has a stiff fiberglass shell and costs $400. The device is available in a number of colors.

You can check out the options and purchase the biometric wallet at the TungstenW website (www.tungstenw.com), where you will also be ambushed by an over-the-top infomercial, featuring the developer.