Businesses begin to push back 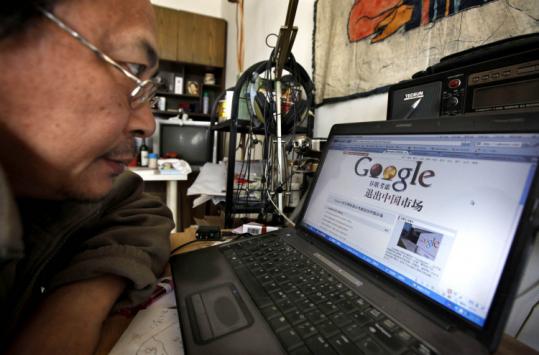 BEIJING — The showdown between Google and the government of world’s most populous country marks a turning point in what was one of the great late 20th century alliances: the bond between Western capital and Beijing’s authoritarian system.

Chinese officials insist the Google case is an isolated one and won’t affect China’s opening to the West or its market-oriented reforms.

In announcing Monday that it would stop censoring results on its Chinese site, Google acknowledged it was aware that Beijing “could at any time block access to our services.’’ But the company made it clear that outcome would be better than having to censor itself any longer.

Though China has not taken any draconian action against Google, it has started censoring results for sensitive searches on Google’s Hong Kong-based website, where its users on the mainland have been redirected. (Hong Kong users could see uncensored results.)

There were also signs China wants to punish Google. Yesterday, a Hong Kong Internet company, TOM Online, said it had stopped using Google’s search service. TOM is owned by the family of Li Ka-shing, Hong Kong’s richest man and a supporter of the Communist government.

Analysts say China’s willingness to stand up to Western companies is a consequence of its meteoric economic rise. The government does not need Westerners’ investments as much as it once did, and it is increasingly bald-faced about its desire to acquire their technology.

“The Google affair is both catalyst and evidence of change,’’ said Arthur Kroeber, managing director of Dragonomics, a Beijing economics firm. “We are at a turning point. It had been very, very unusual for foreign business to say anything too negative about China, because the opportunities here were too large.’’

Indeed, for decades, Western businesses have been Beijing’s closest friends. When Congress railed against China over human rights issues and threatened to revoke China’s most favored nation trading status in the 1990s, business groups flocked to Washington to state China’s case. The last major Western company to confront the Chinese government was Levi Strauss & Co., which withdrew from the country because of “pervasive violation of human rights.’’

More recently, Western businesses have been willing to voice concerns about the way they are treated in China. The European Chamber of Commerce has issued a series of reports criticizing China for a deteriorating business environment. One accused China of embracing “economic nationalism.’’

Even the American Chamber of Commerce in China, long one of the friendliest venues toward the Chinese government, has gotten into the act. On Monday, it said business confidence among 203 members surveyed was at its lowest point in four years.

Joe Studwell, an author, called the tone part of a “new realism’’ toward China. Businesses now understand, he said, that the “unspoken arrangement with China is coming unstuck.’’ China is not opening its markets, as many had assumed it would.