The census under the sea 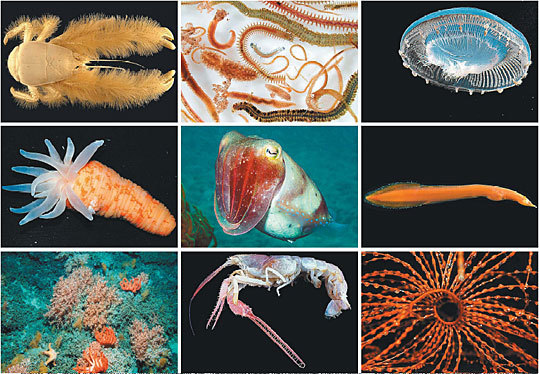 Among other things, they have found tubeworms that imbibe crude oil; a crustacean so shaggy it might be answering a casting call for Broadway’s “Hair’’; and a sort of singles cafe for sharks where great whites cruise hungrily for sex.

The renowned marine research centers at Woods Hole, joined with others across New England and on five continents, are contributing sophisticated technology, deep water know-how, and scientific brainpower to the Census of Marine Life — history’s largest collaboration of marine researchers.

Launched in 2000, the $650 million project will issue its final report in October on the abundance, diversity, and distribution of organisms that rove the oceans’ sun-dappled surfaces, patrol the mysterious middle depths, or lurk at the pitch-black bottom.

The census already has made discoveries that could help fight human disease, probed never-before-seen water worlds, and identified thousands of new creatures.

“We’ve been especially surprised by the movements of some marine species, whether swirling in eddies the size of Ireland or commuting [5,000 miles] across ocean basins,’’ said project senior scientist Ron O’Dor in an interview from Washington.

Some animals are journeying to age-old spawning sites. Some may be responding to changes in ocean temperatures or currents. Others seem to be simply seizing the moment — charging opportunistically into new waters as rival species decline. For example, jumbo Humboldt squid once largely confined to waters off Mexico have begun foraging up the California coast and on to the Gulf of Alaska. The aggressive cephalopods can reach lengths of 6 feet and weigh up to 100 pounds; they reputedly attack skin divers.

The census involves more than 2,000 scientists from 80 countries, with major funding from the Alfred P. Sloan Foundation, as well as contributions from universities, governments, and other foundations. The project has launched hundreds of research voyages to explore seemingly inhospitable places that, it turns out, are often quite livable, after all. A robotic probe measured the hottest undersea vent — blowing 764 degrees Fahrenheit beneath the mid-Atlantic.

An advanced sonar system, developed at the Massachusetts Institute of Technology, enabled researchers to capture “snapshots’’ of hundreds of millions of fish coalescing into mighty mega-shoals moving as one entity.

“If we can see what’s in the ocean, we may be more mindful of conserving it,’’ said Nicholas Makris, the MIT ocean engineering professor who led development of the sensor system.

Salt water covers roughly 70 percent of the world’s surface at an average depth of 2.4 miles. By volume, oceans and seas contain some 323 million cubic miles of liquid living space, which — despite relentless exploitation by humans — remains the planet’s richest and least-understood realm of biodiversity.

“Every drop teems with life,’’ said Linda Amaral-Zettler, a scientist at the Marine Biological Laboratory in Woods Hole and a census researcher specializing in micro-organisms.

Whales, antic dolphins, and winsome seals are the public darlings. But on her office shelf, Amaral-Zettler keeps fuzzy plush-toy bacteria and algae as a playful reminder that Flipper and friends aren’t, well, the only fish in the sea.

“Most ocean organisms are microbial,’’ she said, hoisting an improbably cuddly Alexandrium tamarense, whose toxic blooms are better known as red tide.

Indeed, about 90 percent of marine life is invisible to the naked eye.

Identifying new life forms among the multitudes of microscopic samples collected in scientific sea hunts can be extremely difficult. So one major aim of the census is to advance efforts to compile a “bar code of life,’’ based on snippets of DNA, that allow highly accurate, rapid-fire identification of known species.

“You can take a big sample of zooplankton’’ — tiny current-borne organisms — “measure the bar codes, and tell straight off whether you’ve got new or unexpected species,’’ said Ann Bucklin, head of the marine sciences department at the University of Connecticut and a census researcher who studies global biodiversity of zooplanktons.

Later this year, the census will complete an online database containing websites for some 230,000 unique marine species — from single-celled bacteria to 100-ton blue whales — with images of each, scientific descriptions, and DNA codes.

Census biologists have closed in on an astonishing array of creatures over the past 10 years, identifying more than 5,000 new species. These include a crab, found south of Easter Island, so covered with hair-like tufts it has been designated Kiwa hirsuta, and a species of sponge near the Florida Keys that secretes chemicals which, researchers suspect, might prove effective in fighting some cancers.

Another discovery was the wildcat tubeworm of the Gulf of Mexico. It drills into sea floors for oil, feasting on chemicals from the crude when it hits a gusher.

Behaviors have also been observed. In the mid-Pacific, female great white sharks weave among males in an area that scientists have dubbed the “white shark cafe.’’ And since there is little food in the area, one theory holds that the ferocious carnivores may throng there for easy mating.

What could be more companionable than tens of millions of starfish-like critters living tip to tip on an undersea mountain dubbed Brittle Star City? Or lonelier than the solitary albatross tracked flapping around the entire Southern Hemisphere — 13,670 miles — in 46 days?

The census is ongoing. This month, Woods Hole geochemist German was working aboard the 279-foot-long RV Melville off Southern Chile. Although his mission took a bad hit on March 5 when a remote-controlled deep-dive craft known as ABE disappeared at 1.86 miles of depth, the Melville team continues to focus on the Chile Triple Junction. That’s an ocean ridge shoving inexorably beneath the Andes in a violent, if slow-motion, clash of tectonic plates.

Census scientists have been discovering new marine species at a rate of one every two weeks among the hot vents and crushing pressures of similar extreme zones worldwide, German said by satellite phone.

He balked at labeling the clams, worms, and matted bacteria thriving in these tumultuous depths as bizarre.

“Since so much of the planet is covered by oceans more than [10,000 feet] deep, a visiting space alien might consider what I’m studying now as normal for Earth,’’ he said. “We land-living creatures would seem more weird.’’

Not all census research involves dazzling technology or underwater derring-do. To determine the effects of sea harvests over history, researchers have sifted through vintage New York City restaurant menus (to see what seafood was devoured and at what price), centuries-old Russian Orthodox monastery records (Siberian salmon catches), and Roman texts dating to the second century (describing early use of trawl nets).

University of New Hampshire researchers studying 19th century schooner logbooks — some smudged with cod oil from the fingerprints of the Yankee skippers who kept them — established that New England fishermen landed 20 times more cod in 1860 than commercial fleets catch today.

“Even farther back, in early Colonial times, cod were so thick they would sometimes stop a vessel dead in the water,’’ said the UNH’s Karen Alexander, coordinator for the Gulf of Maine Cod Project. “It’s clear, when you pore through the archives, that commercial species were not only more abundant, they were physically bigger.’’

Meaner, too. Alexander cited a terse (and ungrammatical) 1866 log entry by Beverly fishing captain Samuel Wilson: “Rugh weather but plenty of fish [I] took a man’s foot out of a large codfish.’’

A sampling of creatures from the census