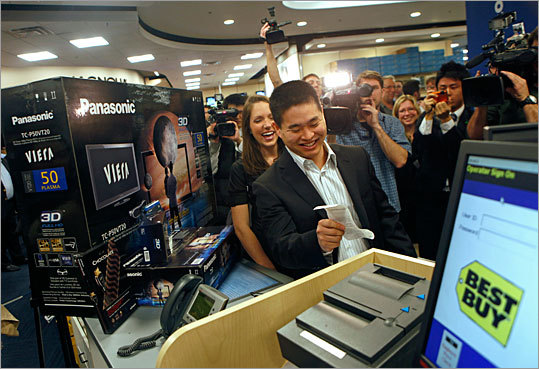 NEW YORK—Panasonic Corp. on Wednesday revealed the price for its first 3-D TV set, confirming that $3,000 is about what it takes to be among the first to watch 3-D movies in the home.

The Japanese company put its first 3-D sets on sale at an event in New York on Wednesday. Panasonic's suggested retail price is $2,900 for a 50-inch plasma set, one pair of glasses and a 3-D Blu-ray player. An extra pair of glasses costs $150.

Both manufacturers plan to expand their 3-D lines rapidly. Rivals are on their heels: LG Electronics Inc. plans to put its 3-D sets on sale in May and Sony Corp. is bringing out its 3-D sets this summer.

The sets can switch between 3-D and regular 2-D mode, which doesn't require glasses.

There's a dearth of movies on 3-D discs, but studios are rushing to put them out. On Wednesday, Twentieth Century Fox, the studio arm of News Corp., said it would make "Ice Age: Dawn of the Dinosaurs" its debut title in 3-D Blu-ray.

© Copyright 2010 Associated Press. All rights reserved. This material may not be published, broadcast, rewritten, or redistributed.
More articles in Technology

Devices unveiled at Consumer Electronics Show in Vegas.
Your comment is subject to the rules of our Posting Policy
This comment may appear on your public profile. Public Profile FAQ