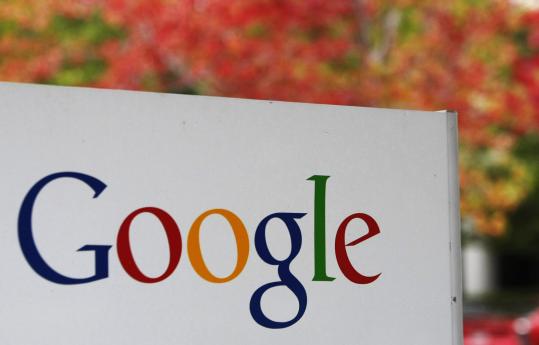 Google says it keeps its campaign advertising and Washington lobbying divisions completely separate. The company declined to say how many candidates and groups it consults for, citing the privacy of campaigns who don’t want to be publicized. (Associated Press/File)
By Jeremy Herb Globe Correspondent / March 10, 2010

WASHINGTON - Scott Brown’s campaign staff members liked to say the Republican senator’s underdog campaign was “powered by Google,’’ appropriating the company’s advertising tagline. But some consumer advocates worry that Google’s growing business in campaign advertising will give it an unfair advantage in Washington, where it also is pursuing a broad lobbying agenda.

Offering sophisticated election consulting services along with market dominance, Google helps candidates decide which ads generate the most attention, can make their ads appear when their opponents’ names are searched, and targets individual voters based on their searches and keywords embedded in their e-mail. Brown raised $1.3 million in a single day during his campaign using a Googlepowered “money bomb’’ that focused on likely supporters.

But while Google is pitching innovative campaign strategies to politicians, it also is lobbying Congress on everything from Internet privacy to Chinese trade. It spent $4 million last year on lobbyists, more than double what it spent two years earlier.

Thus far, the appearance of conflicts of interest remains theoretical. And not everyone is concerned about Google’s growing political clientele, viewing it as a natural evolution of campaign business online. Google says it keeps its campaign advertising and Washington lobbying divisions completely separate.

But some consumer advocates and scholars assert that Google’s emergence as a mandatory tool for successful election campaigns will inevitably make members of Congress less willing to butt heads with the company over big policy issues.

“Politicians are going to think twice about swatting Google when they are going to need that search engine in their next campaign,’’ said Jeffrey Chester, executive director of the Center for Digital Democracy, a consumer advocacy group. “Google is sitting on the Fort Knox of digital information. It’s the go-to company for any kind of Internet advertising campaign, including politics.’’

Google says there is no link between its campaign work for members of Congress and its lobbying activities. Google’s elections advertising plays a positive role in democracy by connecting online searchers with political information, said Peter Greenberger, head of the elections and issue advocacy team.

“Democracy can be messy and noisy, but we provide a platform where anyone can have a voice,’’ said Greenberger. “We believe wholeheartedly in the value of information and providing access to information.’’

Greenberger said the company doesn’t help candidates craft a message, but it tells them which ads are most effective at soliciting clicks or contributions.

The company declined to say how many candidates and groups it consults for, citing the privacy of campaigns who don’t want to be publicized. It is difficult to determine through public records which campaigns spent money with Google, as candidates often purchase the ads through intermediaries. A search of political sites this week triggered Google advertising for the Democratic National Committee, but not its Republican counterpart.

But Google does say it wants to grow, and it has been using Brown’s upset victory in Massachusetts as a selling point. Brown’s ads on Google were viewed by Massachusetts Internet users 65 million times, 10 times more than the total number of people in Massachusetts, Google says.

Anticipating a wave of new clients for the 2010 midterm elections, it has beefed up its campaign consulting team to 10 full-time staff members, based in Washington and Ann Arbor, Mich.

Google is a regular focus of ire from consumer privacy groups, not just because it has grown so adept at profiling its users based on their Internet searches, but also because of its sheer size and market dominance. Microsoft and Yahoo also offer advertising. But Google’s traffic, 65 percent of searches, is well ahead of Yahoo, at 17 percent, and Microsoft’s Bing, at 11.3 percent.

“Google is such a huge player, it’s like having one television network period,’’ said Lillie Coney associate director of the Electronic Privacy Information Center.

“I don’t think they’re in the business to do evil, but with this move, they’re certainly setting themselves up to be portrayed that way,’’ King said.

But Steven Weber, a political science professor at the University of California at Berkeley who studies technology, said that Google has “bigger fish to fry commercially’’ and that it would not do anything that would risk a backlash over gaining political favors.

“It would be madness for them to exploit this in a way that would give someone any opportunity to take them down on this issue,’’ he said.

And Mike Surrusco, research director at the government watchdog Common Cause, said he didn’t see any problem with Google offering political help to candidates, because they offer their services to everyone, regardless of political party.

Google’s involvement in political campaigns began in 2007 under Greenberger, a former aide in the Clinton White House.

In the 2008 presidential race, Google, which worked with all of the major candidates, was an especially key cog in the Obama online machine. With Google, for instance, when users searched for “Obama is a Muslim,’’ an ad would appear saying “Obama is a Christian’’ and linking to the campaign site, Greenberger said.

In the aftermath of Brown’s victory, analysts have largely praised the senator’s online campaign for outmaneuvering Martha Coakley, who did not purchase ads with Google until the final leg of the race. But Democratic strategists, who were once considered the leaders in online campaigning after Obama’s win, say they won’t be caught off-guard in the midterms.

“You have to incorporate technology into every aspect of campaigning,’’ said Mary Anne Marsh, a Democratic strategist based in Boston. “In a lot of races this year it could be the difference between winning and losing.’’