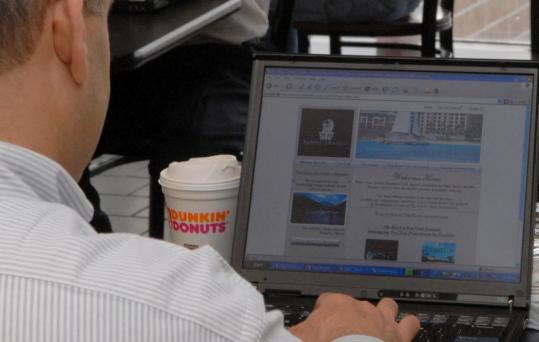 The Obama administration says universal broadband is a critical factor in economic development, yet many Americans don’t know how to use the Internet or doubt its relevance. (Neal Hamberg/ Bloomberg News/ File 2006)
By Joelle Tessler Associated Press / February 23, 2010

WASHINGTON - The government’s plan to provide fast Internet connections to all Americans will have to include some basic instruction in Web 101, according to a survey.

The Federal Communications Commission’s first survey on Internet use and attitudes concludes that those who are not connected need to be taught how to navigate the Web, find online information that is valuable to them, and avoid hazards such as Internet scams.

The study, being released today, comes less than a month before the FCC is due to hand Congress recommendations on how to make affordable, high-speed Internet access a reality for everyone. The findings are certain to shape the plan, which was mandated by last year’s economic stimulus bill.

The Obama administration has identified universal broadband as critical to driving economic development, producing jobs, and expanding the reach of cutting-edge medicine and educational opportunities.

Part of the FCC broadband plan will focus on building networks in areas that lack high-speed access - particularly rural America.

Among other things, the plan will propose using the fund that subsidizes telephone service in poor and rural communities to pay for Internet connections and finding more airwaves for wireless broadband services.

But the survey findings show the FCC plan must also focus on teaching people how to use the Internet and convincing them it is relevant, said John Horrigan, the FCC’s consumer research director and author of the survey.

Of the survey’s respondents, 35 percent do not use broadband at home, including 22 percent of adults who do not use the Internet at all. Of that group, 36 percent say it is too expensive, while 19 percent do not see the Internet as relevant to their lives. Another 22 percent lack what the FCC calls “digital literacy’’ skills. They fall into a category that includes people who are not comfortable with computers or who fear “bad things’’ on the Internet.

The FCC’s findings were based on telephone surveys of more than 5,000 adult Americans conducted in October and November.

■Americans, on average, pay nearly $41 a month for broadband, and 70 percent of users pay for broadband as part of a bundle of telecommunications services.

■Among those who do not subscribe to broadband because it is too expensive, more than half said they would be willing to pay an average of $25 a month.

For questions asked of the larger group of 5,005 adults, the margin of error was plus or minus 1.6 percentage points.