The moon program might be shelved, but the NASA budget plan still has some scientists excited 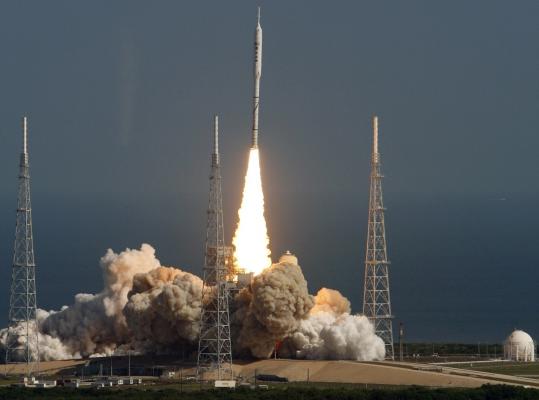 As word spread last week about the Obama administration’s space agenda, which cancels the program to return astronauts to the moon and includes an ambitious slate of new priorities, many scientists responded with excitement, not disappointment.

“I hear a lot of people saying, ‘Obama kills moon program.’ It’s not true; the moon program was moribund. What killed the Constellation program [to return to the moon] was years of underfunding since President Bush announced it in 2004,’’ said Jeffrey Hoffman, a professor at the Massachusetts Institute of Technology and former astronaut who made five space shuttle flights. “NASA is now engaged on a quick study of what really are the technologies we need to have another go at human space flight beyond the earth.’’

The president’s proposed budget would shift the National Aeronautics and Space Administration away from transporting people into low-earth orbit after the space shuttle retires later this year. It would cancel the Constellation program, which included the Ares I rocket that was to launch crews, the Ares V rocket to carry unmanned heavier loads, and the Orion crew capsule.

The spending plan, which proposes an increase of $6 billion in funding over five years for NASA, does not anticipate a manned mission to the moon or to other specific destinations. But it does not abandon support for human space flight and includes an initiative to foster a commercial spacecraft industry that could carry astronauts. The budget would also fund basic research and development that could create new technologies for exploring space, including propulsion technology and launch systems.

Draper Laboratory, a nonprofit research and development laboratory headquartered in Cambridge, has about 80 researchers working on parts of the Constellation program and a program that involves developing commercial capabilities for space transportation systems. The laboratory receives about $25 million to support that work, said Darryl Sargent, vice president for programs, but layoffs are not anticipated if the proposed budget is adopted. That’s because many of the new opportunities fall into Draper’s “sweet spot’’: technology development.

“Whatever direction NASA chooses to go, we believe we will be a key part of it, due to the fact we have a very deep and close relationship with NASA,’’ Sargent said. “It started back in the Apollo days and has continued.’’

The budget, which has yet to be taken up by Congress, will probably be especially controversial in Alabama, Florida, and Texas, which are home to NASA centers involved in the Constellation program.

Canceling the program could affect thousands of jobs, but NASA’s administrator, Charles Bolden, said last week that because the budget is increasing overall, the agency expects to support at least as many jobs as it currently does.

A spokeswoman for Senator John Kerry, Democrat of Massachusetts, said it is necessary to balance space exploration with resources. “NASA’s Constellation program is important, but it may not be doable right now balanced against other urgent priorities,’’ Brigid O’Rourke said in an e-mail.

In the near term, the United States will be left without its own ride into space. Astronauts will have to hitch rides on Russian spacecraft to get to the International Space Station. When commercial capabilities are developed, NASA could contract with industry to send astronauts to the station.

The budget calls for $500 million to support the development of commercial crew transports. Several scientists said depending on the private sector would be risky path, but added that it would be an improvement over the former space program, which set lofty goals of using the moon as a steppingstone to Mars, but was unsustainable and falling behind schedule without enough funding.

The pattern is typical, said David Mindell, an MIT professor and one of the authors of a 2008 report title “The Future of Human Spaceflight.’’

“The fact is if you look at the history of major technologies, from mechanical manufacturing all the way to computers, it’s often the case that the federal government is in the game for about 40 years and then it’s time to go to private industry,’’ Mindell said.

“That’s not why they made that decision, but it’s typical. Is it risky? Yeah. Do we know how it’s going to come out? No. I think it’s exciting.’’

Over the next five years, the budget proposes $7.8 billion for a technology demonstration program that would support exploration and tasks such as refueling in orbit; $3.1 billion for research and development of heavy-lift launch systems and propulsion; and $3 billion for robotic missions to scout targets in advance of visits by humans.

The new budget seems more realistic about the goals, said Mark Schattenburg, a senior research scientist at the MIT Kavli Institute for Astrophysics and Space Research.

“I would imagine all the kinds of people like me, who are working with NASA to do space science - whether it’s planetary, looking at the ozone layer, the ice layers on the earth, whether it’s studying the solar system - all these groups I would imagine were like, ‘Finally, NASA is scuttling expensive things they can’t afford,’ ’’ Schattenburg said.

“We can only do what we can afford; at least we have a clear plan.’’