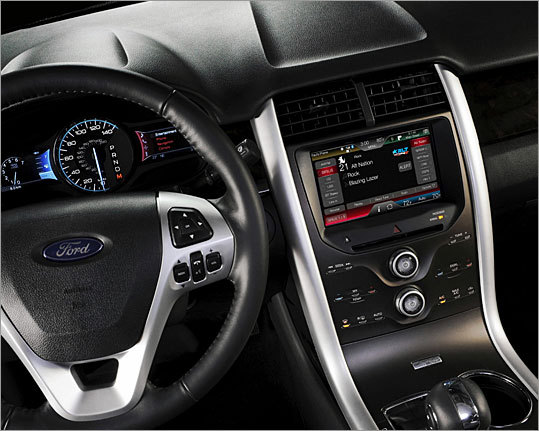 Some of the year’s most sophisticated personal computers will feature four wheels and an engine.

Before the year is out, Ford Motor Co. will offer cars with built-in Web browsers and the ability to link wirelessly to home computer networks. General Motors Corp.’s new battery-powered car, the Chevrolet Volt, will allow users to access vital information about the vehicle from miles away through their smartphones. German carmaker Audi will let a driver enter navigation requests by drawing letters on a touchscreen with a fingertip.

“We’re trying to improve the interface between people and their vehicles,’’ said Jim Buczkowski, Ford’s director of electrical and electronic systems.

But in the process, they’re adding new complexity to the process of driving. Some industry researchers worry whether the proliferation of digital systems will lead to distracted drivers and more accidents. Others warn that many consumers may end up paying for sophisticated features they’ll never use. Sometimes “people just don’t know that the technology is there,’’ said Paul Green, a professor at the University of Michigan Transportation Research Institute. In other cases, said Green, drivers find it too difficult and time-consuming to master the new systems.

Earlier this month, at both the Consumer Electronics Show in Las Vegas and the North American International Auto Show in Detroit, carmakers showed off their newest technology. Ford displayed its MyFord Touch system, an upgrade to the voice-controlled Sync technology the company began offering in late 2007. Sync allowed drivers to place phone calls and tune their radios with voice commands.

MyFord Touch adds a new interface, with two new LCD screens on either side of the car’s speedometer. Each displays an array of data, from engine temperature to climate control settings. Readouts can be altered using video game-like controllers mounted on the steering wheel.

A third screen, in the center console, can be controlled by touch and will include an Internet browser, which can be used when the car is within range of a Wi-Fi hotspot. The driver can also connect a cellphone with 3G data access and go online anywhere.

But Buczkowski stressed that the browser is automatically locked when the car is moving to prevent surfing while driving. So are some features of the GPS system. “We limit the number of button pushes you can take before we say, ‘That’s enough. You need to focus on the road.’ ’’

Chrysler Group began offering Internet-linked cars back in 2008. Now the company is playing catch-up with GM’s OnStar, a cellular voice and data network that delivers navigation help and roadside assistance.

Chrysler’s 2011 Jeep Grand Cherokee, due for release this spring, will feature Uconnect Guardian, a system that can call for roadside assistance, alert police after an accident, or shut down the vehicle after it’s been stolen.

General Motors has invested heavily in the Volt, which is designed to drive up to 40 miles on battery power, but also features a small gasoline engine for longer trips. Set to go on sale in late 2010, the Volt will have a dashboard featuring an LCD screen that can be customized by the driver, like the desktop of a home computer.

The car will also use GM’s familiar OnStar technology to relay data about the vehicle’s status to the owner’s smartphone. The user can remotely unlock the car doors or see if the battery is charged.

“The mobile application really takes the OnStar experience out of the car and puts it in your hand,’’ said Tim Nixon, OnStar’s vice president of engineering systems and operations.

Audi’s MMI digital navigation and entertainment system is getting an upgrade, with a new touchpad where the driver enters data by scrawling one letter at a time.

Audi spokesman Bradley Stertz said the company’s tests of the new system found drivers could easily input data while concentrating on the road ahead.

But some researchers warn that the proliferation of car technology is getting out of hand. Green said that when a carmaker asked him to develop a user’s manual for a future high-tech model, it was a thousand pages long. “We’re going to reach a point where people are going to say it’s just too much,’’ said Green.

And however well-designed, the new digital features could present a hazardous distraction to drivers.

“The technologies that you are seeing being installed in vehicles . . . require you to rethink how you drive,’’ said Joseph Coughlin, director of the AgeLab at MIT, which studies ways to make cars safer for older drivers.

Coughlin said that we may need to train new car buyers about the technology in their vehicles, as airline pilots are retrained when switching to a different model of aircraft. Car dealers might give two-hour classes, or customers might be directed to training videos online.

Owners of the new digital cars must learn to voluntarily dial back the constant flow of electronic diversions and focus on driving, according to Coughlin: “As the great philosopher Clint Eastwood said, a man’s got to know his limitations.’’

IN TOUCH WITH THE TIMES MyFord Touch features two new LCD screens on either side of the car’s speedometer. A driver can toggle through the data using video game-like controllers mounted on the steering wheel. A third screen, in the center console, has an Internet browser.