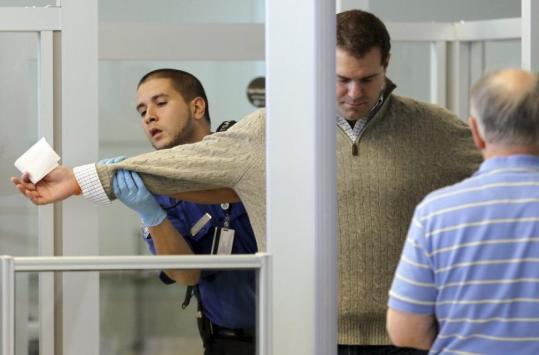 The failed Christmas Day attack has accelerated the search for technologies to detect explosives before they are smuggled onto planes. (Mike Segar/ Reuters)
By Hiawatha Bray Globe Staff / December 30, 2009

The attempted destruction of a Northwest Airlines jet over Detroit on Christmas Day has accelerated the search for technologies to detect explosives before they’re smuggled onto airplanes. But some security analysts see that pursuit as a waste. They say that the millions spent on high-tech gear such as the full-body scanner scheduled to be installed at Boston’s Logan International Airport next year would be better invested in improved intelligence sharing and training of airline employees and security personnel.

“Rather than look at bad things, we need to look at the bad people,’’ said Andrew Thomas, editor-in-chief of the Journal of Transportation Security at the University of Akron in Ohio.

Thomas said that better explosives scanners were not needed to thwart Umar Farouk Abdulmutallab, 23, the Nigerian charged in the attack. Instead, airport workers in Amsterdam should have been aware that Abdulmutallab was on a US government watch list of people suspected of having terrorist sympathies. Armed with this knowledge, airline security workers should have singled out Abdulmutallab for a thorough pat-down search, which would probably have detected the bomb.

Thomas suspects that did not happen because airline security data systems are not completely integrated with US terrorist databases. As a result, airline workers may not be notified when some one on a watch list tries to board a plane, he said. “We need to better align the databases,’’ said Thomas. “We need to make the watch list actually mean something.’’

In addition, Thomas said that many airline workers do not know what to do when a passenger is flagged as a possible threat. He said that airlines spend “the bare minimum’’ of time and money training workers on the correct procedures. “They’re doing it just enough to say they’re doing it,’’ said Thomas.

Bruce Schneier, author of the book “Beyond Fear’’ and a longtime critic of airport security practices, said that no amount of technology will ever make airports safe. He mocked the current array of X-ray scanners and metal detectors as security theater, a way of making passengers feel safer than they are.

Buying costly new body-scanning systems will not help, said Schneier, because terrorists will find new attack methods that the scanners cannot detect. “We will waste hundreds of millions of dollars, that could be spent on investigation and intelligence, to force the terrorists to make minor changes in their tactics,’’ he said.

The US Transportation Security Administration, which is responsible for airport security, has already gone beyond technology in its search for solutions. Spokeswoman Ann Davis said the TSA also uses “behavior detection officers,’’ who are trained to study the behaviors and facial expressions of airline passengers, using techniques pioneered by the Israeli airline El Al.

“We use it in 160 airports in the United States,’’ said Davis. “It has proven very effective in identifying people who fear discovery.’’

Between October 2008 and September 2009, the behavior detection program singled out 69,612 suspicious travelers. Of those, 530 were arrested, though Davis could not say how many were for charges related to terrorism.

But behavior detection methods also have their critics. “I don’t know that there’s any scientific evidence that somebody who’s sweating and nervous at an airport is a terrorist,’’ said Michael German, policy counsel at the Washington legislative office of the American Civil Liberties Union. German, an FBI agent for 16 years, believes the money spent on behavior experts should instead be used to hire more antiterrorism investigators, who could identify dangerous people long before they get to an airport.

German also has little use for enhanced scanning technologies, including machines that will allow operators to see travelers’ bodies beneath their clothes. He said that it is uncertain whether the scanners would detect all kinds of explosives. “What’s the point of giving up our privacy,’’ German said, “if it doesn’t improve security?’’