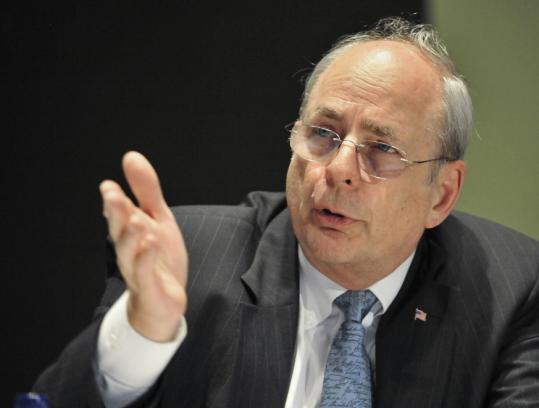 CAMBRIDGE - Under the current plan, people are supposed to set foot on the moon again in 2020.

But that may change. A blue-ribbon panel appointed to review the US space program issued a detailed report this fall that said it lacks the resources to carry out its mission. The report explores possible new directions, including forgoing moon landings and rethinking the plan to end US participation in the International Space Station in 2015.

Last week, Norman Augustine, the former chief executive of Lockheed Martin Corp. and chairman of the panel that issued the report, visited the Massachusetts Institute of Technology with other experts to give an insider’s view of the way the panel came to the provocative conclusion that the program “appears to be on an unsustainable trajectory. It is perpetuating the perilous practice of pursuing goals that do not match allocated resources.’’

The committee did not issue specific recommendations. Augustine said that, in considering possible directions for human space flight, nearly 3,000 alternatives have to be considered.

For example, they considered the fate of the space shuttle program, which is to be discontinued at the end of fiscal year 2010, leaving an estimated seven-year gap before the US has the ability to send astronauts into space on its spacecraft.

The panel noted that technical problems and budgetary constraints have held back the Constellation program, which includes a rocket developed to replace the space shuttle and another to launch heavier loads of crew and equipment to the moon.

They concluded that without a $3 billion budget increase, meaningful human space exploration would not be possible.

“The first big change . . . is to match the money to the [human space flight] program. If we decide not to do that, you could continue to kick the program down the road for a ways until it finally falls off a cliff,’’ Augustine said. “We went around and talked to people at various NASA installations, and everywhere they said we ought to match the program to the money, and if we can’t do that we should either have more money or less program.’’

The panel’s report, “Seeking a Human Spaceflight Program Worthy of a Great Nation,’’ was issued in October and has received a mixed reaction, said John Logsdon, professor emeritus of political science and international affairs at George Washington University.

“The White House views the report as a mixed blessing,’’ Logsdon said. “It did say something that needed to be said, but it has dumped into the president’s lap very squarely that you can’t have a viable program without more money. And they’re trying to avoid giving programs more money. So it’s presenting both an opportunity and a problem.’’

In 2004, President Bush outlined a vision in which the space program would focus on landing on the moon and using it as a steppingstone to Mars.

Augustine’s committee’s options included another alternative for achieving the ultimate goal of reaching Mars: the “flexible path’’ approach, in which the National Aeronautics and Space Administration would forgo landing on the moon in the near term. Instead, the space agency would set other milestones, such as visiting asteroids and other near-Earth objects and orbiting the moon and Mars, avoiding the need to immediately develop expensive landing and surface systems.

“The advantage of the flexible path is you get out of low earth orbit and start going to a new place each year,’’ said Edward F. Crawley, a member of the committee and an MIT professor.

Part of what needs to be considered, Augustine said, is that the benefits of a human space flight program are not only economic and scientific. They may be dwarfed by intangibles such as the flood of interest in science and engineering careers fueled by a major event such as a moon landing.

“It was the committee’s feeling the space program had not been well served by what we thought were overly ambitious claims of the impact of the human space flight program on science, on the economy, on new products,’’ Augustine said.

The program, he added, did have major positive impacts in those areas, but said other less obvious effects were significant.

“When I talk to my grandchildren, the two things that excite them are space and dinosaurs - and we’re very short on dinosaurs,’’ he said.