Shoppers, get out your smartphones 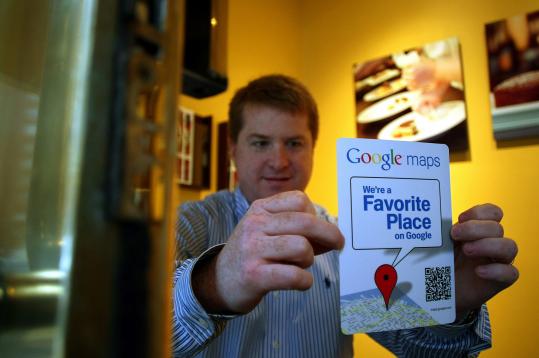 Chris Kane, an employee of Finale, attached a bar code to the front door of the Boston restaurant that customers will be able to scan, using a smartphone, to get information about the business. (John Tlumacki/Globe Staff)
By Hiawatha Bray Globe Staff / December 14, 2009

Finale Desserterie & Bakery in downtown Boston has always had a ZIP code. Now, thanks to the Internet search titan Google Inc., the dessert restaurant also has a bar code.

The black-and-white square, with its pattern of irregular shapes, is pasted to Finale’s front door. It’s part of a window sticker declaring that Finale is “a Favorite Place on Google.’’

The endorsement may or may not impress passersby. The bar code will mean nothing to most people. But a tech-savvy consumer who scans the bar code with a smartphone will quickly see a Google Web page full of information on Finale, including menus, prices, and reviews from people who have dined there. Finale could even tempt customers to walk through the door with special offers.

“It’s totally the wave of the future,’’ said Lori Morretti, president of CM Communications in Boston and Finale’s marketing manager.

Finale is one of about 100,000 US businesses tapped for the new Favorite Places program. It’s a bid by Google to enhance the quality of its business listings, and it’s an experiment designed to discover whether bar codes and smartphones can be used together as vital promotional tools for brick-and-mortar businesses.

There’s nothing new about using window stickers to advertise. For years, many dining establishments have sported stickers from the restaurant reviewing company Zagat Survey LLC. The emblems, called “clings’’ by marketing experts, are meant to reassure consumers the restaurant serves good food. But the clings also promote Zagat as a reliable source of dining information.

Internet search services have also used clings for quite a while. Citysearch, which provides online shopping, dining, and entertainment guides for hundreds of US cities and towns, began sending cling stickers to retailers over a decade ago.

“It’s always been well loved by merchants,’’ said Citysearch’s senior vice president of publishing, Kara Nortman. “It gives them credibility in the eyes of the consumer.’’

More recently, a Citysearch rival, Yelp.com, has issued thousands of its own clings. But Google’s bar-coded clings are bringing an added measure of technology to the sticker wars.

To be eligible for a Favorite Places cling, businesses first sign up for a free account at Google’s Local Business Center. Google gives the company a “place page,’’ a website, generated automatically, that the company can update with photos of the business or information about hours, services, and discounts.

There’s also a reviews section, where customers can post comments. That can be a bit risky: Finale’s entry includes both raves and criticisms.

The Local Business Center program makes it cheap and easy for small businesses to establish a presence on the Web. If a prospective diner types “Boston dessert restaurants’’ into Google, the Finale place page is one of the options that appears.

Google marketing manager Ryan Hayward said the program also encourages businesses to keep their Web listings up to date. “We need to form direct connections with business owners to make sure that information is always correct,’’ Hayward said. The more accurate the Google business pages, the better the quality of Google’s listings.

Citing government statistics, Google estimates there are 29.6 million US businesses. So far, about a million have signed up for Local Business Center, and about one-10th of those have been picked to receive a bar-coded Favorite Places sticker.

Recipients are chosen on the basis of positive reviews posted on the company’s Google place page, and by the number of times users search for the business.

The bar code on each sticker has a different look from the one found on products in supermarkets. It’s called a QR bar code, an alternative system that’s popular in Japan, though it has not caught on here, and it’s designed to be easily read by smartphone cameras. Owners of Apple iPhones, BlackBerries, and phones that use Google’s Android operating system can download free software that reads the bar code and directs the user to the Internet address with more information about the business.

Some merchants are skeptical, however.

Brattle Book Shop in Boston has been chosen as a Favorite Place, but co-owner Joyce Kosofsky thinks people won’t scan the bar code for more information. “If I’m outside a store, I can just go in,’’ Kosofsky said.

“It can provide value to the consumer in the long run, but not the way they’re implementing it,’’ Paisner said.

Consumers will use the technology only if they receive digital discount coupons, Paisner added. “This is your best way to drive a call to action,’’ he said.

Google gets it; the Local Business Center recently added features to allow merchants to offer such coupons.

Moretti said that offering cut-rate deals would damage Finale’s upscale image, but she might use the bar code to promote discounts for repeat customers.

Even without such discounts, Moretti thinks that bar-code-based retailing is bound to catch on. “I can’t imagine why people wouldn’t do it,’’ she said.