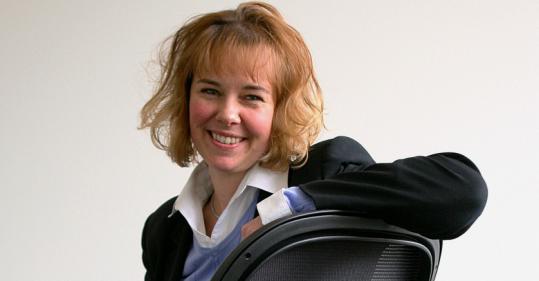 Christina Lampe-Onnerud heads Boston-Power, a cleantech firm in Westborough that has been designated as a Technology Pioneer. (Wendy Maeda/Globe Staff/File 2009)
By Scott Kirsner Globe Correspondent / December 7, 2009

■Davos-bound. Each year the World Economic Forum selects a small group of companies as “Technology Pioneers,’’ and there are usually a few local firms in the bunch.

This year, a committee of tech experts has chosen 26 companies developing products that “will have a deep impact on business and society.’’ Most will get an invitation to the forum’s annual gathering of CEOs, world leaders, and consciousness-raising celebrities in Davos, Switzerland, next month.

Of the 26 Technology Pioneers for 2010, 18 hail from the United States, and six are based in Massachusetts: Three of those are life-sciences companies (Aura Biosciences, MicroCHIPS, and Proteon Therapeutics), two could be dubbed cleantech (Metabolix and Boston-Power), and one is in infotech (StreamBase Systems). Two of those six Massachusetts companies are run by women, both of whom came to the Bay State from Europe (Elisabet de los Pinos of Aura is from Spain; Christina Lampe-Onnerud of Boston-Power is from Sweden.)

I caught up with MicroCHIPS chief executive and cofounder John Santini last week; the honor comes as his MIT spin-out marks its 10th year in business.

The Bedford company is developing an implantable medical device that can sense what’s going on inside your body or deliver medication. (It’s a thin microchip that contains tiny wells to hold either sensors or small doses of a drug.) Santini said the 20-person company is expecting to conduct its first clinical trials next year. One product will be an implanted glucose sensor for diabetics that lasts for a year, and reports on blood-sugar levels wirelessly to a hand-held device. The other product will deliver parathyroid hormone to the spine to help grow new bone in patients with osteoporosis. Both devices will be implanted in an outpatient procedure, using local anesthetic, he explained.

The company has been funded by Boston venture capital firms, including Polaris Venture Partners and Flybridge Capital Partners, along with corporate investors, and it sounds like a new round of capital is in the works.

Getting the opportunity to go to Davos and rub elbows with the likes of Bill Gates and Bono “is a once-in-a-lifetime event,’’ Santini said, “assuming you’re not a Fortune 500 CEO.’’

■Open-door policy. Boston seems to be turning into one big college campus - and that could have a powerful effect on our innovation economy.

Borrowing an idea from academia, some local professionals have been holding office hours, creating an opportunity for short meetings with entrepreneurs. Some of these take place at the offices of a venture capital firm or a branding agency, but others take place at coffee shops. They’re promoted on blogs and on Twitter and are open to anyone who might want to sign up in advance. And sometimes, no reservation for a specific time slot is needed.

Just as office hours make it easy for college students to get one-on-one guidance from a professor, in the business world they create an informal atmosphere for getting quick feedback on an idea, and perhaps an introduction to someone who may be able to help move it forward.

And for the attorneys, public relations gurus, or other professionals who hold office hours, it’s a low-investment way to meet potential clients, or simply share 10 or 15 minutes of free advice.

The office hours concept seems to be building momentum in Boston, with more than a half-dozen sessions taking place this month. (The website GreenhornConnect.com has a comprehensive list.)

The VC Ready Law Group will be camping out at Crema Café in Harvard Square to talk intellectual property and corporate structure. Alphabet Arm Design is inviting entrepreneurs to discuss branding and corporate identity at its South End digs. And Rob Go and Santo Politi of the venture capital firm Spark Capital will be helping start-ups hone their pitches at the Cosi sandwich shop in Kendall Square.

Go, a former eBay executive who helps scout for new investments for Spark, noticed people in other parts of the country doing office hours and wanted to help import the idea to Boston. He held his first session in November, and hopes to do one or two every month.

“It’s a different sort of forum for us to connect with the entrepreneurial community,’’ Go says, “somewhere in between chatting with someone at a conference and having them come in to do a formal hourlong pitch in our offices.’’

“For us, it’s about seeing entrepreneurs early in their process. If someone is working on an opportunity in mobile gaming but they don’t have a formal pitch yet, we can help steer them and be more collaborative.’’

Siemens Venture Capital and Flybridge Capital Partners, both in Boston, are also testing the concept this month.

I tried doing office hours as an experiment last month, and found it was a great way to meet entrepreneurs who weren’t already in my network and hear what they were up to. I did a mix of six, 10-minute slots (prescheduled by e-mail), and a half-hour when anyone could just show up to chat.

What was especially gratifying was that the entrepreneurs who participated stuck around to hear what others were working on, and they chimed in with pieces of advice about things like hiring engineers and picking the right name for a new Web service.

Will we soon see top executives at EMC Corp., product designers at Bose Corp., and researchers at Biogen Idec Inc. joining the movement, offering guidance to fledgling start-ups? Might the CEOs of big companies like Iron Mountain and Raytheon Corp. start offering a hand to the next generation of innovative businesses in Massachusetts?

I’d like to see that happen, and holding office hours is a very low-level commitment, unlike serving on a board or making an investment.

I’m tired of hearing people gripe about how the Boston business culture is too closed and insular. What better way to open it up than to put out your personal welcome mat once a year, or once a quarter, for just an hour or two?