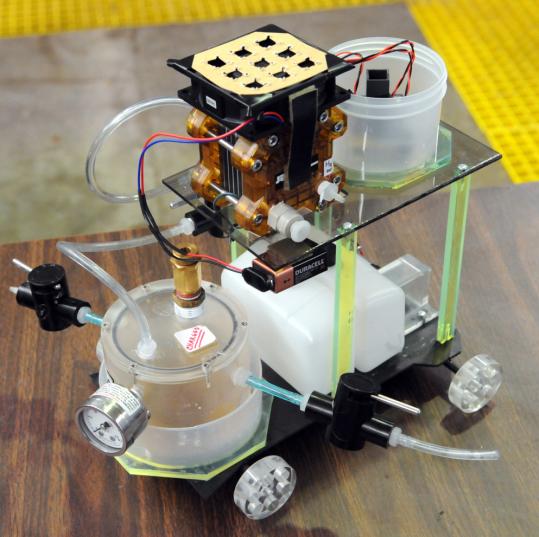 Text size – +
Prototype
The dream of a “hydrogen economy’’ isn’t dead yet.

A group of Northeastern University students showed the judges at a competition last week in Nashville how autos can make hydrogen under their hoods - thus eliminating the need to create a new nationwide network of hydrogen filling stations.

Called the Aluminator, the shoebox-size car looked like it was stripped from the set of the Wallace & Gromit film “The Wrong Trousers.’’

But the car’s crazy tangle of tubes and aluminum foil, piled high with a fuel cell, battery, plastic bag, pressure gauge, and carrying about a cup of water, traveled nearly 77 feet before petering out, just inches from the finish line.

That was good enough for Northeastern to take first place in a field of 30 schools at the annual Chem-E-Car competition, hosted by the American Institute of Chemical Engineers and sponsored by Chevron.

The Aluminator, which took about a year to develop, used aluminum foil and sodium hydroxide, and its onboard water supply, to produce its hydrogen fuel.

The Northeastern chemical engineering students (in keeping with the spirit and requirements of the competition) also programmed a chemical reaction to stop the car at a certain point.

When I heard about Tweetbookz, an online print shop that will package your tweets into a pretty little book of maxims, I thought, “Weren’t blooks bad enough?’’

Blooks, you might recall, were a publishing scheme from the dot-com-bubble era that never amounted to much, in terms of literature.

But for some, the idea of seeing one’s 140-character brain blips baked onto paper is hard to resist. Even New Yorker staff writer and author Susan Orlean, aka@susanorlean, enthusiastically retweeted a report about Tweetbookz last week.

Orlean is one of those established writers (best known for “The Orchid Thief’’) who is now trying her hand at a pithier style.

“Do you think it’s possible to lose both your favorite shirt and your sunglasses in your own house? I’m here to tell you, it’s possible,’’ reads a recent tweet from Orlean.

She also chronicles the drama surrounding her chickens and sends dispatches from her New Yorker assignments in Europe.

If you think you are sitting on something better, TweetBookz (www.tweetbookz.com) will print up to 200 of your tweets in either a hardcover book ($30) or a paperback ($20). You can get a book of your own tweets - in English, Spanish, French, or Hebrew - but not someone else’s.

You cannot edit existing tweets or add new ones directly to your book.

You can choose one of four colors for your book’s cover. Inside are black-and-white pages, on recycled paper. The books are 5 1/2 inches high, and 8 1/2 inches across.