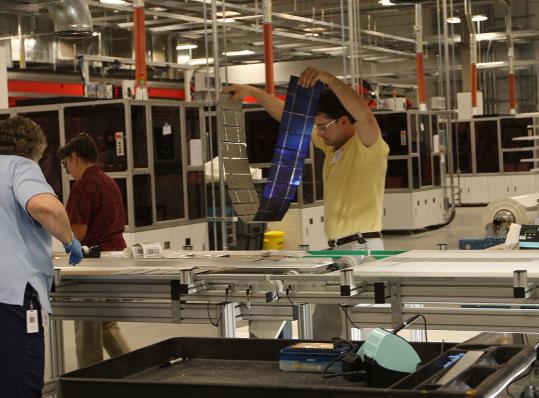 Even before he won office, Governor Deval Patrick was counting on Evergreen Solar Inc. to energize the state’s economy.

Patrick visited the Marlborough company on the campaign trail, urging it to build a solar panel factory here, instead of in competing states such as New York and Oregon. Once in office, Patrick sealed the deal by offering Evergreen more than $76 million in grants, land, loans, tax incentives, and other aid. It was one of the largest investments the state has ever made in the success of a private company.

Patrick now casts Evergreen as “a symbol of the future,’’ a leader in the state’s burgeoning clean energy industry with the potential to create thousands of jobs. The company, with nearly 700 employees in the state, has more than doubled its local payroll since 2007.

But now state officials are quietly fretting about Evergreen’s future.

Battered by the ailing economy, stiff global competition, and plunging prices for solar panels, Evergreen says it may be forced to downsize its new manufacturing plant, at the old Fort Devens Army base northwest of Boston. The company says it expects to burn through most of its $83 million in cash by year-end, and last month it persuaded the state to lend it another $5 million. Its stock, which peaked at nearly $19 per share in late 2007, closed at $1.83 yesterday.

“There are a lot of investors who believe they are not viable in their current form,’’ said Christopher Blansett, a JPMorgan Chase & Co. analyst who thinks the company will survive because of its technological edge but may have to cut jobs in Massachusetts to do so. “The stock is trading like it’s going to go into bankruptcy.’’

The company’s challenges underscore the risks the state faces whenever it places a big bet on an emerging industry or firm. While such investments create the tantalizing possibility of luring new companies to Massachusetts and creating high-paying jobs, they also carry enormous risks if the companies fail, wasting taxpayers money and providing little in long-term gains.

Evergreen’s struggles are particularly sensitive for the Patrick administration, because the governor made such a personal push for the firm.

Indeed, at a closed-door meeting earlier in March, a state economic development official warned it could be a “PR nightmare’’ if Evergreen collapses, according to handwritten records of the meeting obtained by the Globe under a public records request.

Despite the risk, some state economic development and administration officials insist such investments are vital to compete with other states and countries and bring new jobs to Massachusetts.

“This is what it takes to build a new economy,’’ said Robert Culver, chief executive officer of MassDevelopment, a quasi-public agency that has handled much of Evergreen’s aid. Culver pointed out that the investment in Evergreen helped the state attract “one of the largest, if not the largest solar panel manufacturers in the country.’’

Evergreen’s sales are up. The company says it sold roughly 203,000 solar panels in the first half of this year, compared with 132,000 in all of 2008. But Michael El-Hillow, Evergreen’s chief financial officer, acknowledged the company faces “intense competition’’ from other solar companies around the globe.

“We’re a small company in Massachusetts trying to find a way,’’ he said.

A big problem is the price of solar panels, which keeps dropping, in part because of sinking demand and competition from China. Low prices could help build a market. But they also make it hard to turn a profit. El-Hillow said prices have dipped 34 percent in the past year.

“You tell me any industry that can withstand a 34 percent drop in selling prices and not face problems,’’ he said.

Many critics question whether it is the government’s role to be gambling with taxpayer dollars and to be choosing one company over another.

“It’s very dangerous to have bureaucrats making decisions that venture capitalists struggle with,’’ said state Senator Mark Montigny, chairman of the Senate Committee on Bonding, Capital Expenditures & State Assets, who calls incentives such as those awarded to Evergreen “giveaways.’’

Evergreen’s incentive package from the state included nearly $21 million in direct grants to the company, $22.6 million in tax incentives, $13 million in grants to build roads, upgrade electrical transmission lines, and upgrade other infrastructure to support the 450,000-square-foot Devens plant, a $1-per-year lease for 23 acres at Devens worth $2.3 million, and $17.5 million in loans.

Although the loan would be secured by Evergreen’s equipment, MassDevelopment staff members warned last month that the company does not currently generate enough cash to pay it back, and gave it the highest score possible for risk, 6 out of 6. The $5 million request is also double the $2.5 million limit allowed under MassDevelopment’s own guidelines. Nevertheless, MassDevelopment’s board unanimously approved the loan at a board meeting Sept. 17.

Culver, the MassDevelopment chief executive, said he could not comment on the decision to approve the $5 million loan, because it has not been finalized.

But Ian Bowles, Patrick’s secretary of energy and environmental affairs, said he felt the state was obligated to make the loan, because it was part of the original incentive package in 2007, even though the initial loan offer expired. Besides, Bowles said, it’s important to help support key local companies, such as Evergreen, which, in addition to having 699 full-time workers in Massachusetts, has 230 temporary workers in Marlborough and Devens.

“This is one of the largest clean energy companies’’ in the state, Bowles said, “and it is a priority of the Commonwealth to help Evergreen in whatever way we can.’’

Bowles said he was aware of the company’s challenges, but pointed out that many other solar companies face similar problems and said he thought Evergreen had done a “remarkable job’’ of cutting costs and taking other steps to improve finances.

State officials have wrestled for years with whether to provide so much aid to Evergreen. Some board members objected, for instance, when MassDevelopment decided to give the company a $10 million grant as part of the incentive package, the first time in memory that the agency gave a company so much money with no requirement to repay the state.

“MassDevelopment is not in the business of providing large grants and shouldn’t be perceived as such,’’ board vice chair man Joseph Craven said at an August 2007 meeting. Craven, who resigned from the board last month, said at the meeting that he wanted to make clear the proposal was coming from state government, a reference to the Patrick administration, rather than MassDevelopment.

More recently, at a closed-door board meeting in March, MassDevelopment officials expressed concern that the company was burning through cash and running into other financial problems. An unidentified official made the “PR nightmare’’ comment at the same meeting.

Evergreen has since raised $72.5 million through a stock offering in May. But it has told investors it plans to spend $55 million by the end of the year in order to make its loan payments, complete its factories in Massachusetts and Michigan, and start work on a new wafer manufacturing plant in China, which would leave the company with roughly $30 million.

“Their cash situation is going to be tight,’’ said Rob Stone, a Cowen & Co. financial analyst.

JP Morgan’s Blansett said he is optimistic that Evergreen can survive because it has pioneered technology that allows it produce silicon wafers - thin, shiny strips used to make solar cells - more cheaply than anyone else. Evergreen’s “string ribbon’’ technology allows it to use significantly less silicon than normally required to make the wafers.

But Blansett said Evergreen has had a harder time competing on the other steps involved in making solar panels, particularly with companies with lower labor costs in China.

Evergreen has lost $308 million since its founding in 1994, including $84.6 million in the first six months of this year.

Unless the situation improves, El-Hillow said, Evergreen could be forced to narrow the focus of its Devens plant to manufacturing solar wafers, its core strength, and shift the rest of its manufacturing process elsewhere. That in turn could force the company to cut jobs in Massachusetts, though El-Hillow said it is difficult to estimate how many. El-Hillow said the company has no immediate plans to scale back operations in Devens.

El-Hillow also said the state’s incentive package is not as large as it might seem, because only a portion of the money is in cash. For instance, the package includes $7.5 million in state tax credits. But Evergreen will only be able to cash in those incentives if it turns a profit.

As for the possibility the company may not survive, El-Hillow said that many predicted the company’s demise three years ago. “The company has defied the odds before,’’ he said. “We’re still here.’’